Chelsea Alionar said she couldn't get much support from local doctors, so she turned to social media to connect with other COVID-19 patients. 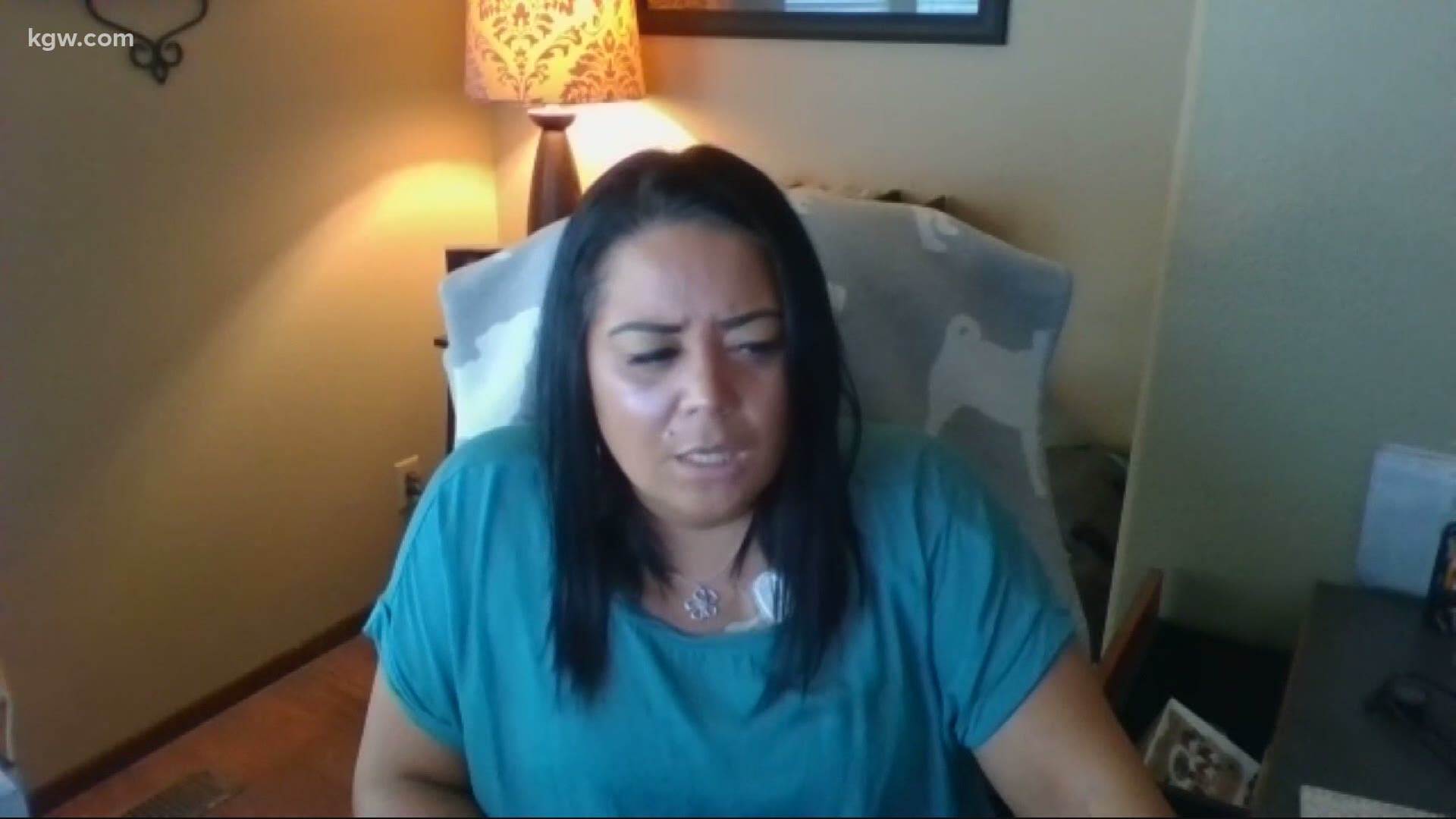 KEIZER, Ore. — A Keizer woman has battled COVID-19 for months, and even after testing negative twice, she's still dealing with serious symptoms.

Chelsea Alionar talked with KGW in the middle of May. More than a month later, she continues her fight as both patient and advocate.

For two months Alionar could barely move, consumed by fatigue, fever and fear.

"I am significantly better. Since the last interview I did with you in May, I had so many people reach out to me,” Alionar said.

The 37-year-old, who has no underlying health conditions, tested positive for the novel coronavirus back in early April after suffering from symptoms since early March. Months later, she is still waking up to different symptoms.

She took two more coronavirus tests in late May and both came out negative. Since then, she's only left her house three times. While Alionar has improved, she still hasn't recovered.

For about a week and a half, many of her symptoms went away completely, she said, including her cough and fever. Then one morning she felt like she'd been hit by a semi-truck. She said it felt like her "bones were splintering."

"It was painful from the inside out. And I get these feelings, like surges of adrenaline, inside my body and it just courses," Alionar said. "Then my heart rate ticks up. I am just sitting here at my desk and I look at my watch and my heart rate is in the 160's, and I start sweating and then I get a fever. Then I’m tremoring, just sitting here tremoring, and there's nothing I can do to stop it."

Alionar said she also still suffers from fatigue, dizziness, shortness of breath and sense of forgetfulness that many patients are calling "COVID fog" or "COVID brain."

She said she couldn't get much support or medical help from local doctors, so she turned to social media to connect with other COVID-19 patients. She joined a few support groups, most notably a large one called 'Long Haul COVID Fighters' started by another Oregonian, Amy Watson.

In the group she's found a sense of validation and comfort that she wasn't able to find prior.

"It's a very true statement to say you will never understand what this is like until and unless you've had COVID-19 or something like it, like MERS or SARS. You just won’t get it, you won't understand. This is just - it’s just so flippin' miserable,” Alionar said. "If you're in different stages you can relate to somebody a little bit better.”

Alionar and the other Facebook group administrators, including Watson, share information with a medical research team at Mount Sinai in New York to better understand post-COVID conditions.

Alionar said those physicians believe the most fitting diagnosis for her and others like her at the moment is a condition called Post Viral Dysautonomia.

According to Dysautonomia International, it is not a specific medical diagnosis but is rather an umbrella term used to describe any malfunction of the autonomic nervous system.

“We're really trying to be advocates for ourselves,” Alionar added. "My entire existence has revolved around COVID-19 and advocation around COVID-19. As long as the virus is active in our community, being our nation, I will exhaust myself to my body’s fullest extent to continue to get my message out there.”

The bond she's built with others worldwide has become a silver lining through the misery.

"We're making a difference for one another,” Alionar added. "I know I'm not alone now. I don't feel as alone.”