Oregon State Police advise against calling 911 to report people who aren't social distancing. So what should you do? That's not an easy question to answer. 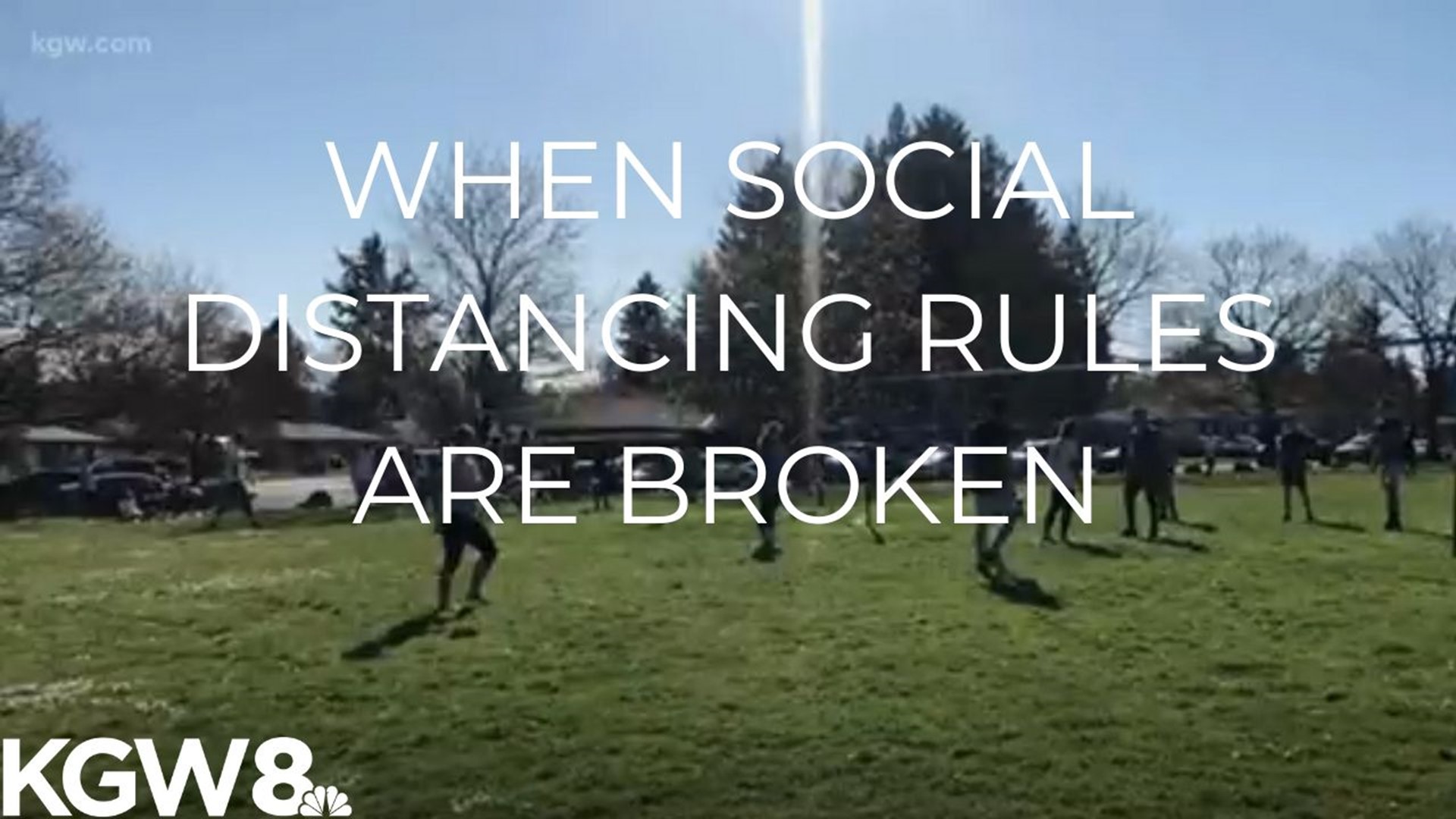 PORTLAND, Ore. — On average, Portlanders have been calling 911 and the police bureau’s non-emergency line about 22 times a day for the past three weeks to report people who aren't observing proper social distancing measures.

Of the 469 social distancing-related calls that the Portland Bureau of Emergency Communications has cataloged since March 25, 82 came in over the Easter weekend.

One of those calls came from Willow Knight.

“The kids really did not want to talk to me. They saw me coming,” she said in an interview Monday.

The 48-year-old Portland native said she was walking to an elderly relative’s home Sunday to drop off shampoo.

As she approached Parklane Park, she noticed an elderly couple with masks, an “older” man walking, and a group of, in her estimate, 50 to 60 teens and young adults playing volleyball.

“I said, ‘Hey guys, this really isn't social distancing. I mean, what maybe you could explain what's going on,’” she said. “And um, I kinda got it like a gruff response … Things like ‘Well, why are you wearing the mask? Oh, is it to hide your ugly face?’ And one of them said ‘Hey, we're coming within six feet, we're going to infect you.’”

Knight, who is transgender, said that as a small group of boys came uncomfortably close, an older man who appeared to be a chaperone asked if she was “a boy or a girl.”

She left and called the PPB non-emergency line.

Minutes later, she said an officer drove by, but nothing happened.

Portland police confirm they’ve issued zero citations for violations of Gov. Kate Brown’s stay-at-home order, something which could qualify the offender for a Class C Misdemeanor.

“There's kind of an expectation that police will police all things,” said Lt. Tina Jones in an interview Tuesday.

Lt. Jones sent KGW the bureau’s FAQ page about the order, which states the goal "is to make community members aware of the importance of compliance and to encourage them to voluntarily follow the directions given.”

She added that arresting and citing everyone who violates the order would "overwhelm our criminal justice system.”

“I think it's very similar to, I would say, driving,” she said. “Everybody thinks they're an exceptional driver, and there are a lot of really bad drivers out there. And some people, they would love for us to go out and issue citations to every single person who's violating every single rule of the road, and that's just not ever going to happen.”

Similar tactics are being employed in outdoor havens recently flooded by tourists, like the Oregon coast and the Columbia River Gorge.

In the last few weeks, Seaside closed its beaches, Cannon Beach closed its city-limits to non-residents and Oregon parks and recreation crews have closed popular trails and parks.

Enforcement agencies in all three instances confirmed Tuesday they’re sticking with warnings and education. None had issued citations.

In an email Tuesday, Gov. Brown’s office endorsed the strategy but offered guidance to Oregonians who come across social distance violators.

“Oregon State Police urge Oregonians not to call 911 if they see people violating the stay-at-home order – this number is reserved for reporting police, fire or medical emergencies," the governor's office statement said. "However, OSP advises that people may choose to self-educate their fellow Oregonians, while maintaining social distancing themselves, if they see violations of the stay-at-home orders (primarily people gathering in large groups), or they may call their respective police agency’s non-emergency number.”

Oregon isn’t alone in its hesitance to penalize people for failing to keep their social distance.

In San Francisco, a city lauded as an early adopter of staunch stay-at-home measures, police said this week they’ve issued two citations, but they warned that number will increase.

Further south, police in Manhattan Beach issued 129 citations over one weekend earlier this month, each carrying penalties of up to $1,000.

Police departments in Texas and Michigan are following suit as well.

But even when scientists say failure to follow social distancing measures can and does kill people, it's hard to say whether everyday citizens should attempt to correct each other’s behavior.

In a recent interview with Time Magazine, experts suggested using the “it’s not you, it’s me” approach: telling someone that since you or anyone could have the virus without knowing it, it’s best to stay six feet apart, in case they hadn’t heard.

“We shouldn’t be obnoxious, we shouldn’t get nasty,” Caplan said. “But in this day and age, I think you can speak up.”

Lt. Jones reasoned Tuesday police in Portland aren’t issuing citations because Oregonians are doing a good job at flattening the curve on their own, “which is great. You know the whole point behind it is to save lives and limit the ability for this virus to spread.”

Regardless of the outcome, Knight said she has no regrets about speaking up.

“What really struck me was the fact that, like, my partner owns a salon, and that's her business. That's her baby, and right now she can't go to work. Not only that, she can't see her mother, she can't see her daughters," Knight said. "I have four kids, I haven't seen two of them in over a month and a half. And here's these kids, 50 strong in the park playing volleyball. To me it felt rude, insensitive and sad.”

KGW asked viewers on social media if they’ve come across instances of people violating social distancing protocols and how it made them feel.

The responses poured in.

RELATED: Residents are telling on neighbors, businesses who break quarantine