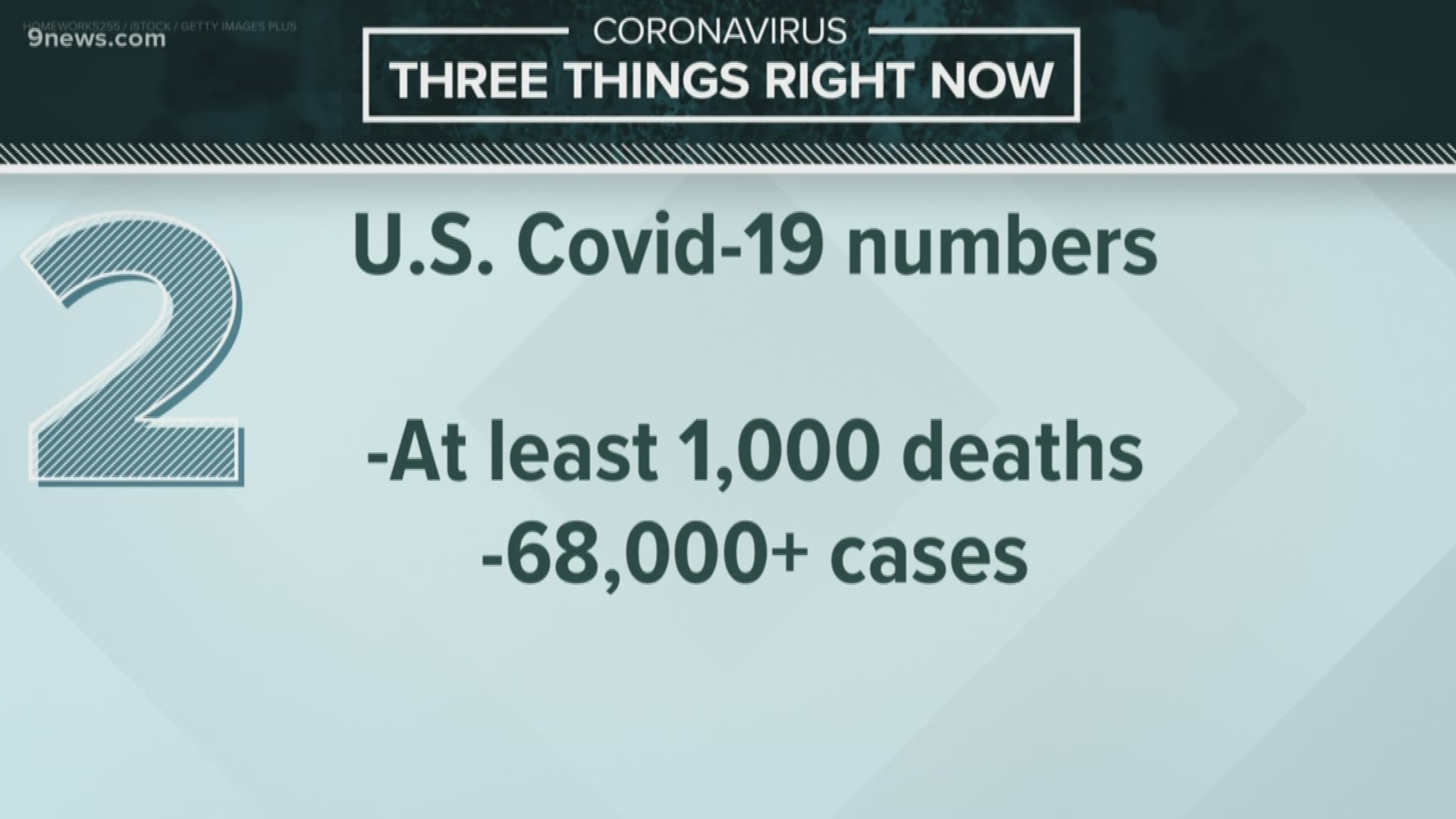 Several counties have since rescinded their orders and adopted the state's orders.

The statewide order takes effect Thursday at 6 a.m. and lasts through at least April 11.

Conor Cahill, with Polis' office, said local jurisdictions' orders stay in place and that they can put in requirements that are more restrictive.

Polis' order, however, applies to everyone in the state.

Below is a list of cities and counties that have issued their own orders, several of which have since rescinded theirs to adopt the state's order.

Aligned: City and County of Denver

(Editor's note: This county has since "aligned" its order and adopted the statewide order, which went into effect Thursday, March 26 at 6 a.m. and lasts though at least April 11.)

When does it end? April 10 (but it could be extended longer)

Denver's order bars picnics and organized games in parks, as well as nonessential travel. Residents can leave their homes to exercise, but must stay six feet apart.

Denver is utilizing a variety of city staff – including park rangers, safety officers and public health officials – to do proactive patrols of parks and recreation areas, businesses and neighborhoods.

Anyone found to violate the orders will be educated about the public health order to achieve compliance and discourage future violations, according to city officials.

They will track those violations and continued violations by individuals and groups will result in citations.

Trips to the grocery store, pharmacy and even liquor store/marijuana dispensaries are allowed as long as proper social distancing is being put into practice.

During the order you can do the following:

You can find a list of essential and non-essential businesses here.

(Editor's note: These counties have since rescinded their order and adopted the statewide order, which went into effect Thursday, March 26 at 6 a.m. and lasts thought April 11.)

The order takes effect on March 26 at 8 a.m. It will remain in effect through 11:59 p.m. on April 17 unless public health officials determine the orders can be allowed to expire at an earlier time.

The Tri-County Health Department held a media briefing at 10 a.m. to discuss the measure.

At the meeting, officials said due to evidence of ongoing transmission, the public health orders were "an appropriate next step" to help slow the spread of COVID-19 and prevent healthcare facilities from becoming overwhelmed.

Slowing the spread of the disease is key because it buys time for hospitals to prepare, secure badly needed medical supplies and increase testing capacity.

(Editor's note: This county has since rescinded its order and adopted the statewide order, which went into effect Thursday, March 26 at 6 a.m. and lasts though at least April 11.)

It orders non-essential businesses to cease operations within the county. Outdoor activities are allowed either individually or in groups of up to four as long as proper social distancing is in place.

Mark Johnson, executive director at Jefferson County Public Health, said the orders were implemented after county officials reviewed what was going on in the community and realized the public was not taking social distancing seriously.

"We are truly trying to get people to stay at home as much as possible...but it's also an educational tool to tell the public this is serious," he said.

Johnson said the goal is to educate people, and law enforcement will not be stopping cars or confronting people unless there "are serious problems."

He said the county does have the authority to levy fines and put people in prison, but "we hoping and praying it doesn't get to that."

Johnson said he believes the situation will get worse before it gets better, but he has faith Americans will do the right thing.

> Read the full order, including business and group exemptions, by clicking or tapping here.

City and County of Broomfield

Residents can engage in outdoor activities such as walking, hiking, biking or running, provided they comply with social distancing requirements (6 feet apart).

"All individuals currently living within Broomfield are strongly encouraged to stay at their place of residence," the order says.

It also prohibits all public and private gatherings of any number outside a single household, except in essential instances.

City and County of Broomfield parks, open space and trails will remain open, but playgrounds picnic areas and other gathering places such as golf courses or athletic fields will be closed.

(Editor's note: This county has since rescinded its order and adopted the statewide order, which went into effect Thursday, March 26 at 6 a.m. and lasts though at least April 11.)

The order requires all individuals anywhere in Boulder County to stay at home (also known as shelter in place) except for certain defined essential activities, work and services.

The city of Boulder rescinded its order and city residents will now be required to follow the county order. The move was down to eliminate any confusion.

The order follows a similar order that went into effect Tuesday for the City of Boulder. That order has since been rescinded to comply with the county-wide order.

Under Pitkin County's shelter-in-place order, residents are asked to stay at home and tourists are asked to leave and avoid this mountain county, which is notably home to Aspen and Snowmass.

The order closes non-essential businesses and asks those that remain open to put into place proper social distancing measures.

When does it end? April 3 (but it could be extended longer)

San Miguel County -- which is home to Telluride -- was the first in the state to issue a stay-at-home order.

This community is also attempting to test as many residents as possible for COVID-19.

RELATED: What recovering from COVID-19 looks like from a healthcare worker going through it

This order directs visitors to leave the county, and that non-resident homeowners return to their primary place of residence.

Like other counties, this shelter-in-place order closes businesses except for essential services and shutters restaurants for everything but takeout and delivery.

> Read more about the order by clicking or tapping here.