Hot weather is bringing people out to rivers and lakes to cool off. And officials are sharing water safety and coronavirus safety reminders. 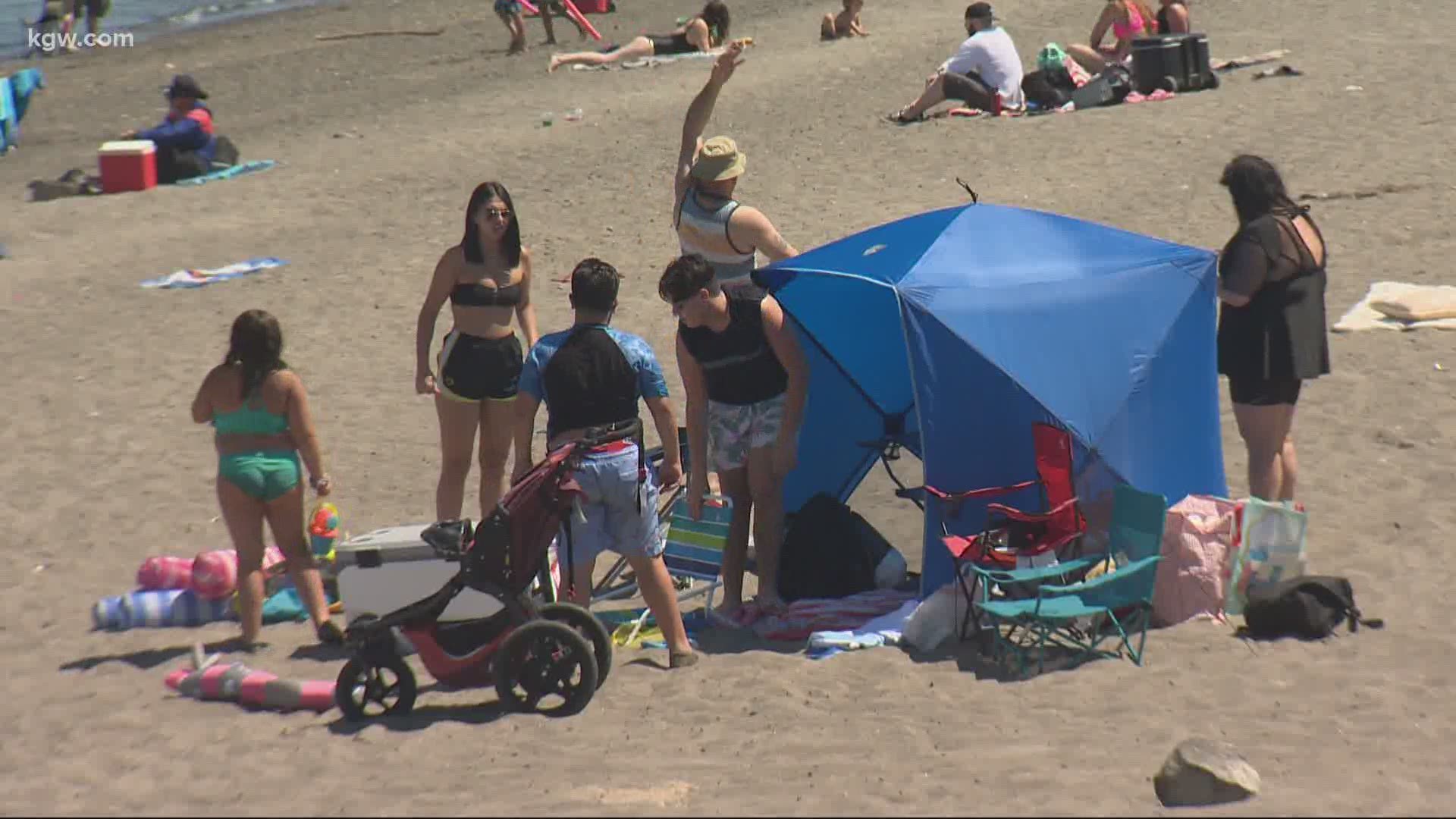 PORTLAND, Oregon — The sun is shining and temperatures are up but most public pools are closed. That means a lot of people are heading to area rivers and lakes. And with COVID-19, experts say you've got to be careful on the beach, too.

Full sun above made for full parking lots on Sunday, at places like Broughton Beach in Northeast Portland. By mid-day the shoreline along the Columbia River was already filling up, as the temperature climbed.

And while most groups seemed to set up 6 feet apart, the vast majority went maskless.

“I do have a mask with me, and it used to feel safe outside, and it’s a little different now,” said beach visitor Melissa Jackson.

Jackson had a mask handy, that she said she may put on, if the crowding gets too much.

Steve Schalk left his mask in the car, but feels OK joining his small group.

“Because we’ve been together, so as long as people are 6 feet from us, we’re good to go,” said Schalk, who acknowledged, it's hard not to mingle some at the water's edge.

“Everybody’s pleasant, everybody’s kind of doing their own thing; not many masks out here but you know, it is what it is. What do you do when you go in and out of the water”.

Remember, the guidelines in Oregon and Washington include wearing a mask, even outdoors, if you can't social distance 6 feet from other people.

“It’s really important to keep those masks on when you’re out and about even when you’re on the river, or really try and isolate yourself to one group so that you’re following the guidelines, and trying to keep this thing at bay, and flatten the curve,” said Leah Gordon.

Gordon is River Rescue Program Manager with American Medical Response. And she had more to say about safety, once you're in the water. Gordon said whether it's paddleboarding on the Willamette River, tubing on our colder, swifter rivers, or getting in the water anywhere else you go, it's all about life vests for everyone, with an extra focus on the kids.

Because especially with rivers, the water can be deceiving.

“The river is relentless, it continues to flow. And with those wider rivers definitely the farther out you go, the more you’re going to feel that current, so staying close into shore and again, really keeping an eye on kids (is important).”

Because of the pandemic, AMR lifeguards are not stationed at two popular swimming spots: High Rocks on the Clackamas River and Glen Otto Park on the Sandy River. But AMR is holding a life vest collection drive starting Monday, July 20th.  The goal is to collect new or gently used life jackets that will be used for life jacket distribution programs.

RELATED: 'If you have the ability to scream and stomp out of a store,' you can wear a face mask, OHSU doctor says