The head of the Oregon Health Authority said get-togethers with friends and family are driving much of Oregon's surge. 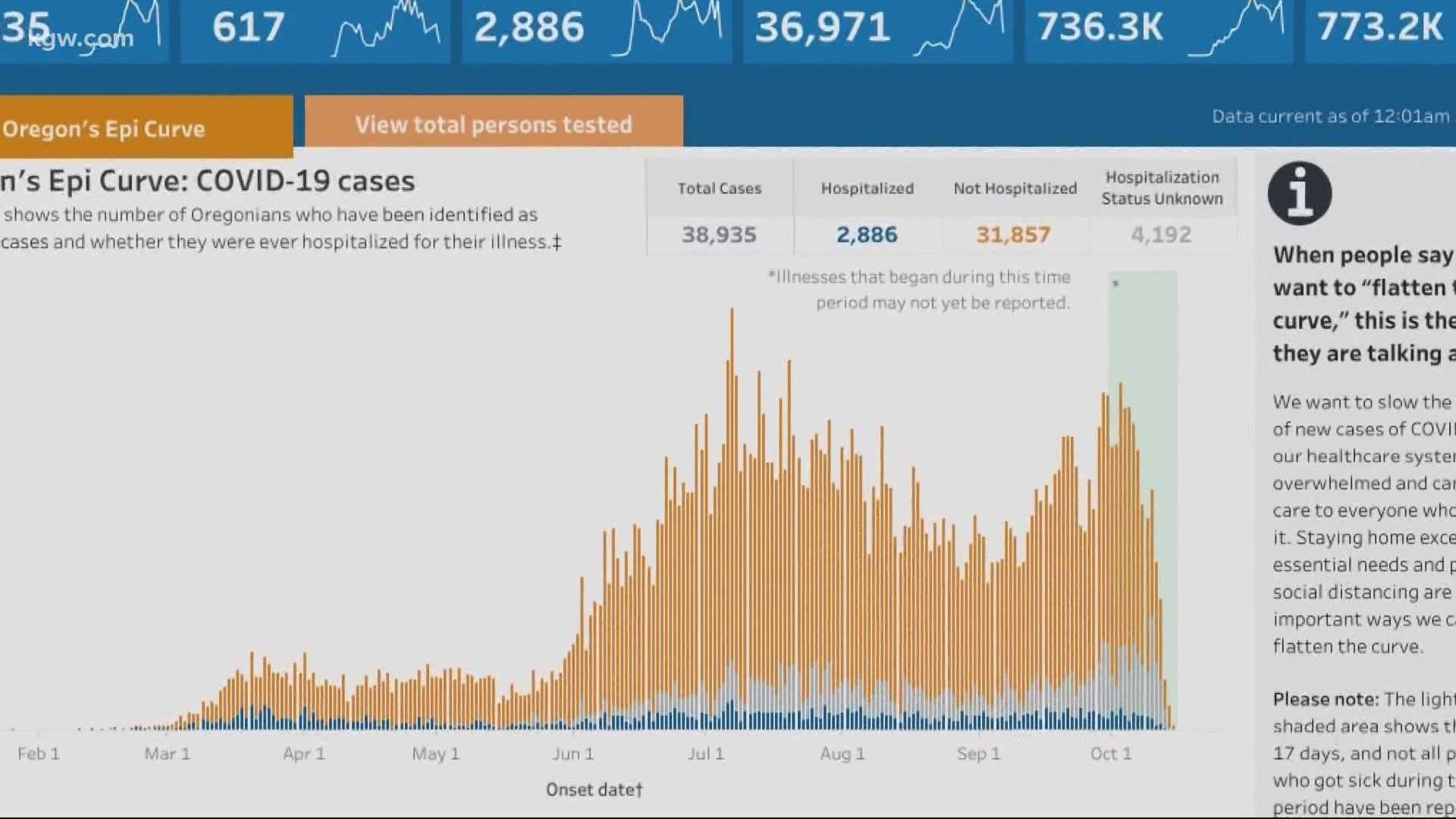 PORTLAND, Ore. — Coronavirus cases in Oregon are surging to the highest point they've been since the pandemic started.

During a call with media last Friday, OHA director Pat Allen called the trends a "reversal of the encouraging landscape" from just six weeks ago.

What has led to that reversal? Many Oregonians have let their guards down.

"There is an element, certainly, of COVID fatigue and people eager to be with loved ones and friends -- totally understandably,” said Dr. Jennifer Vines, lead health officers for the Portland metro tri-county area.

Recently, Labor Day, wildfires and chillier weather contributed to the spread. New modeling from OHA shows if Oregonians don't step up their COVID-19 precautions, cases will climb even higher.

"We could safely say we'll see an increase following Halloween,” Dr. Vines said. “So, there is that potential for that same pattern to play out.”

In the Portland metro area, restaurant and bar owners worry the uptick could lead to another shutdown and kill business. But Dr. Vines said she hasn't heard anything about another shutdown.

“We are in conversations with the state. I am not hearing anything that would suggest we're headed in that direction at this point,” Dr. Vines said. “There's more work we need to do to really understand if restaurants and bars are fueling transmission. What our contact tracers almost uniformly say back to us is that it's social gatherings.”

Dr. Vines said outbreaks in workplaces and long-term care facilities, as well as cases without a link, also account for a percentage. But looking at trends in the data, get-togethers with friends and family drive much of Oregon's surge.

"This is supported by our recent polling showing that, while an overwhelming majority of Oregonians regularly heed the precautions, Oregonians who take fewer personal protective measures also gather socially more often,” Allen said.

A Multnomah County epidemiologist pulled a random sample of cases from the last two and a half months where people said they went to social gatherings before testing positive. They said people reported the smallest group size was three people, the median was 10 and the largest was 100 people. Generally, case investigators are finding the gatherings are smaller.

"In the summer, it was barbecues, people in and out of houses, it was close contact often that comes with carpooling, for example, so coworkers and people who work together who share rides. That time in a close space, especially as temperatures have dropped,” Vines said.

It's up to Oregonians to bend the trend. It's already happened twice before during the pandemic.

"Recognizing that humans are social creatures and I think it's a question of taking steps to lower your risk. You don't have to be perfect but we all need to be pretty good most of the time in order to make a difference,” Vines said.

The same preventive measures health officials have repeated for months still ring true. Now, they’re encouraging people to get flu shots so hospitals aren't inundated with COVID-19 and influenza patients at the same time. Dr. Vines advised if you're going to have a small group inside to open the windows for ventilation and throw on a jacket.