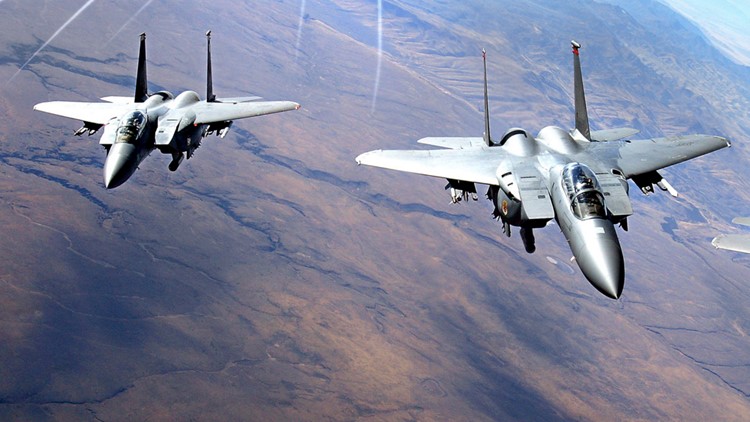 Fighter jets could fly lower in Idaho, Nevada and Oregon

The Air Force on Wednesday said it plans to prepare an environmental impact statement to study the idea and will hold meetings and take public comments through Nov. 25 to help shape the study.

Mountain Home Air Force Base in southwestern Idaho operates flights over portions of the three states.

"Modifying this airspace will allow the USAF to provide a more realistic and efficient airspace training environment and improve aircrew proficiency in low-altitude tactics and radar masking using mountainous terrain for survival in a highly contested environment," the Air Force said.

The airspace overlays the borders where Idaho, Oregon and Nevada meet. The Air Force divides that area into six Military Operations Areas.

Supersonic flights, in which aircraft travel faster than the speed of sound and can create a sonic boom, are allowed at 30,000 feet (9,100 meters) above sea level in all the Military Operations Areas except over the Duck Valley Indian Reservation.

The changes would allow jets to descend at supersonic speeds. The specific altitudes are will be defined in the environmental impact statement.

The first public meeting where comments will be accepted is Nov. 4 in McDermitt, Nevada. Later that week in Idaho, meetings are planned for Boise, Grand View, and Mountain Home.

Separately, the Air Force is fighting a lawsuit filed by seven Boise residents and an environmental group involving soldiers and military jets coordinating exercises in nine urban centers in Idaho.

Under that plan, aircrews would communicate with service members on the ground dressed as civilians to blend in as they identify targets with low-power lasers.

The lawsuit filed in April contends the Air Force did not do enough to inform the public about the exercises and failed to prepare a full environmental impact statement — a process that can take years.

The Air Force has said the lawsuit should be dismissed because the proposed training is needed due to the nature of modern war.