The Laurelwood Center has 120 beds, which will mostly be for women and couples. Priority will be given to people 55 and older, those with disabilities and veterans. 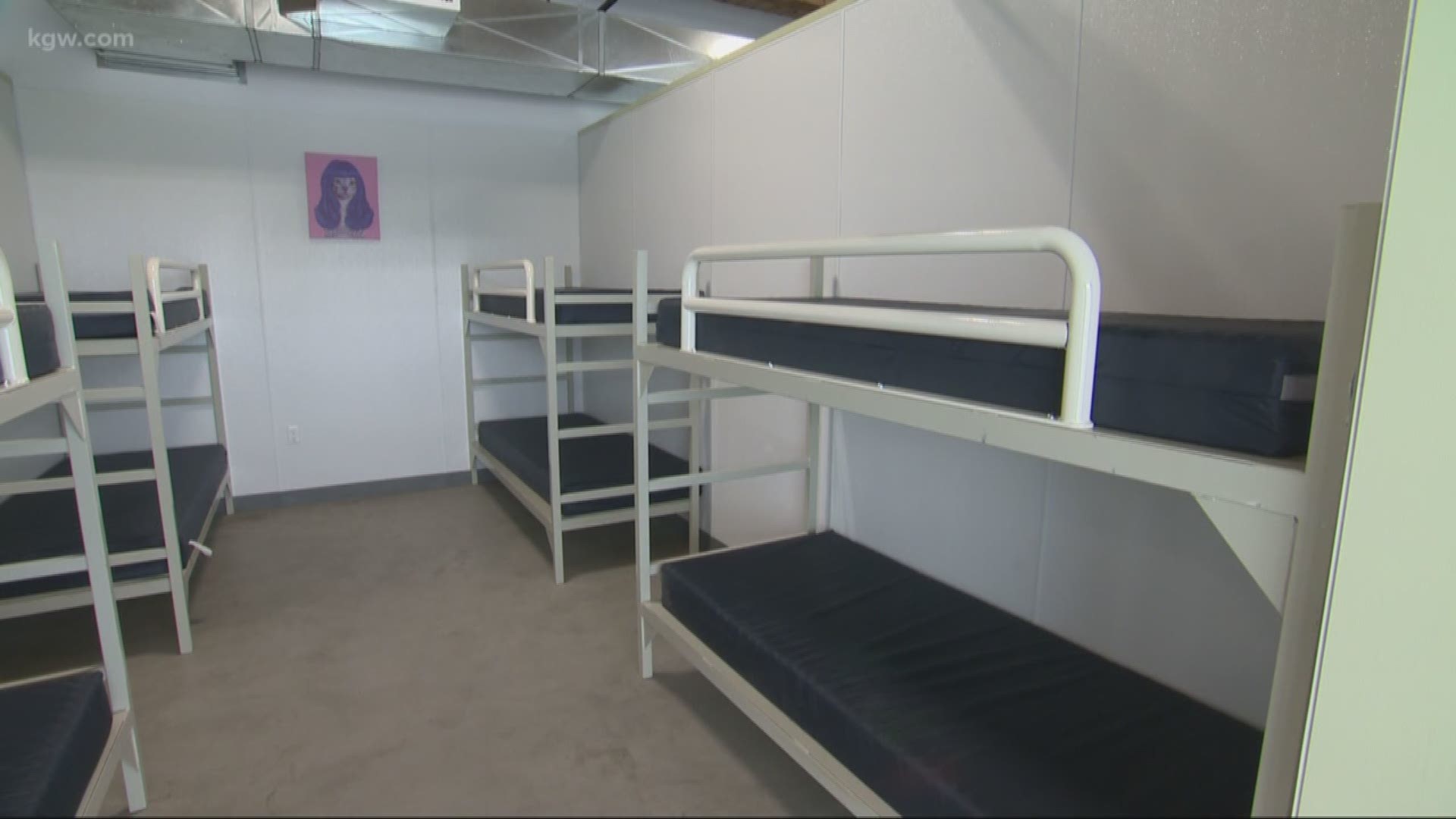 PORTLAND, Ore. — The one-story gray building, accented with a bright blue fence, has no signage, except for the silver number and letters nailed to the side, displaying the Southeast Portland street address.

Tall windows line most of one side, but they’re mostly frosted in white, making it impossible to see in.

It’s only after getting buzzed in through the locked, camera-outfitted gate, that you see the scale of the improvements made at this once abandoned grocery store.

“This provides relief from the road,” said Stacy Borke as she was walking through the manicured courtyard, complete with a patch of AstroTurf where pets can relieve themselves. “The courtyard is a really unique piece. It’s really intentionally designed, and we incorporated a number of components from the steering committee that was developed when we initially started talking about what it would be like to have a shelter in this neighborhood.”

Borke is the senior director of programs at Transition Projects, the nonprofit tasked with running the shelter.

It has 120 beds, which will be allocated mostly to women and couples. Priority will be given to people over the age of 55, those with disabilities and veterans.

Residents will be required to have reservations or referrals, said officials, eliminating the draw for random drop-ins or crowds outside the facility.

“They’re not going to have a big, long line of people waiting to get in, or in the morning, when the doors open, a whole flood of people leaving,” Multnomah County Chair Deborah Kafoury said during a tour Friday. “[Residents] can access services here. They don’t have to leave.”

The Laurelwood Center, which is set to start taking in residents Thursday, will be open 24 hours a day year-round with staff providing one-on-one support to help residents find permanent employment and housing.

Both the services and the building’s actual structure represent turning points, said Kafoury.

“When we first were opening as many shelters as we needed, we really would get any building, any vacant building that was safe, and we had churches that didn't have a kitchen,” she said,

Staff and volunteers will provide residents at the Laurelwood Center two meals a day.

But now, Kafoury said, the city and county are replacing temporary shelters with permanent, renovated ones.

Later this month, weeks after Laurelwood Center is set to get up and running, a 100-bed navigation center is scheduled to open just under the west end of the Broadway Bridge, bringing the total of year-round publicly funded beds to 1,443.

During severe weather, the County is able to open an extra 375 severe weather beds in local churches, government buildings and other locations.

It's a necessary shift, said Kafoury, as the number of people living on Multnomah County’s streets continues to climb. The most recent Point In Time count showed more than 2,037 live on the streets in Multnomah County.

Related story: Most homeless on Multnomah County streets in a decade, 2019 count shows

That’s the highest total ever since the county’s been doing this count with current HUD standards.

Kafoury calls it an economic issue.