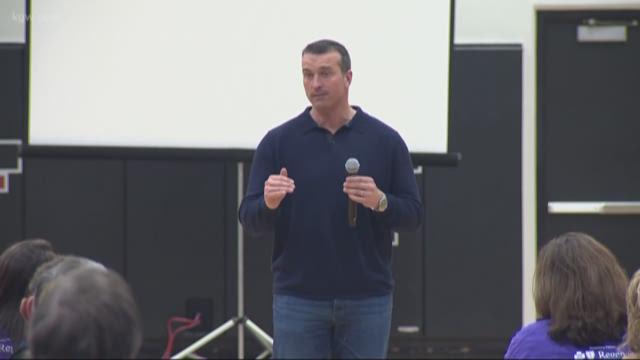 It was a message Chris Herren, 42, said he wished he could have heard himself when he was in high school.

When he was a Boston Celtic, Herren said, he was so addicted to drugs, he'd run outside the arena in his warm-ups to buy Oxycontin from his dealer, then run back in to play.

“I was labeled a drug addict,” said Herren to students and parents who packed the Tualatin High School gym.

Herren poured out his heart, hoping kids would focus on what he called the “first day” of addiction, not the “worst day.”

“In the woods with a red solo cup, smoking pot in the back seat,” said Herren. “That's where we all begin, but that's not talked about enough.”

Herren said his own struggle began with alcohol as a 14-year-old, grew to cocaine in college, then heroin and prescription opioids when he was in his 20’s and early 30’s.

“I've been near death multiple times after overdoses,” said Herren. “I spent hundreds and hundreds of thousands of dollars on Oxycontin when playing professional basketball.”

Oregon’s Public Health Division reported the number of prescription-opioid related deaths in Oregon was slowly declining in the last decade. In 2016, the number of fatalities was 149, compared to 238 in 2006.

“We're on the right path but have a lot of room to grow,” said State Health Officer, Dr. Katrina Hedberg. “We have been working with our health systems and have been seeing a decrease in the amount of opioids being prescribed.”

“We've seen a reduction of the opioid prescriptions within our population by 22 percent with a goal of 25 percent by 2020,” said Kerry Bendel, Chief Pharmacy Officer for Regence. “We're ahead of target and we're really pleased with that.”

Herren also challenged parents to care more about what their kids do socially, not just how they do in sports and academics.

“I think we've kind of waved the white flag and say ‘kids will be kids,’” said Herren. “I see nothing about doing drugs and alcohol that should be part of being a kid.”

Herren said he’s been clean for 10 years. Between time with his wife and three kids he shares his story more than 250 times a year.