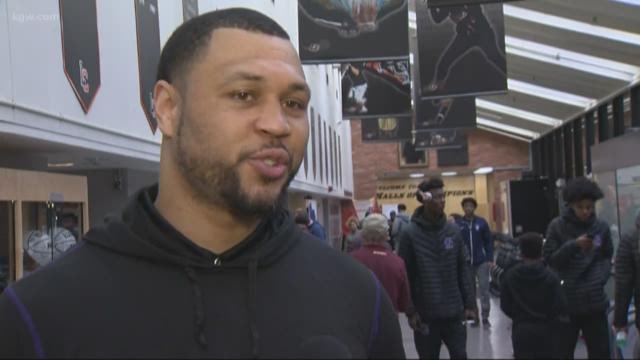 “It's always good to be back here, just driving into the city feels good,” said Roy, shortly before his team took the court.

“It's amazing, I learned so much this year,” said Kemp. “[Roy] taught me personal stuff from experiences that he's had, he just passed it down.”

Roy said any hesitation he might have had about switching jobs went out the window last spring.

Roy was with friends in Compton when police said he was shot in the leg after a group unrelated to Roy’s opened fire.

“Everyone I talked to after that was like, ‘life is a precious thing, so you’ve got to go for those opportunities and things you want,’” said Roy.

“The shooting was part of it, but it wasn't the whole thing… it was just too hard to resist not going back to where I played my high school ball, my parents went to Garfield, all my family did.”

Haskins was Jefferson’s basketball coach when Jefferson squared off against Garfield — and Brandon Roy — in Seattle 18 years ago. Jefferson lost that game to Garfield.

“I tell Brandon when I see him that they cheated us,” said Haskins, grinning from ear to ear. “We were winning them by like, 5, with 30 seconds and we lost because they got four ‘mysterious calls’ from the Washington refs… they're not cheating—just mysterious calls,” clarified Haskins.

“Ahhhh! [Haskins] is talking about that?!? Here we go!” Laughed Roy. “It was a good game, but there were no ‘mysterious calls.’”

Trash talking aside, Monday night was about honoring Dr. King by doing what he did — bringing people together from all walks of life; Boys and girls teams from schools in both urban and suburban neighborhoods participated in the invitational. Roy said it made returning to Portland, that much more special.

“I just try to honor [Dr. King] with the example that he set,” said Roy. “I try to do the same things especially for young black men and hopefully get them into more gyms and off the street corners. Hopefully I continue to do my part and more guys step up and do theirs.”

On Monday night, Garfield beat Jefferson 63-57. No word if any ‘mysterious calls’ affected the outcome.