On Monday, the Beaverton School District welcomed back its youngest students, kids in pre-K through second grade. 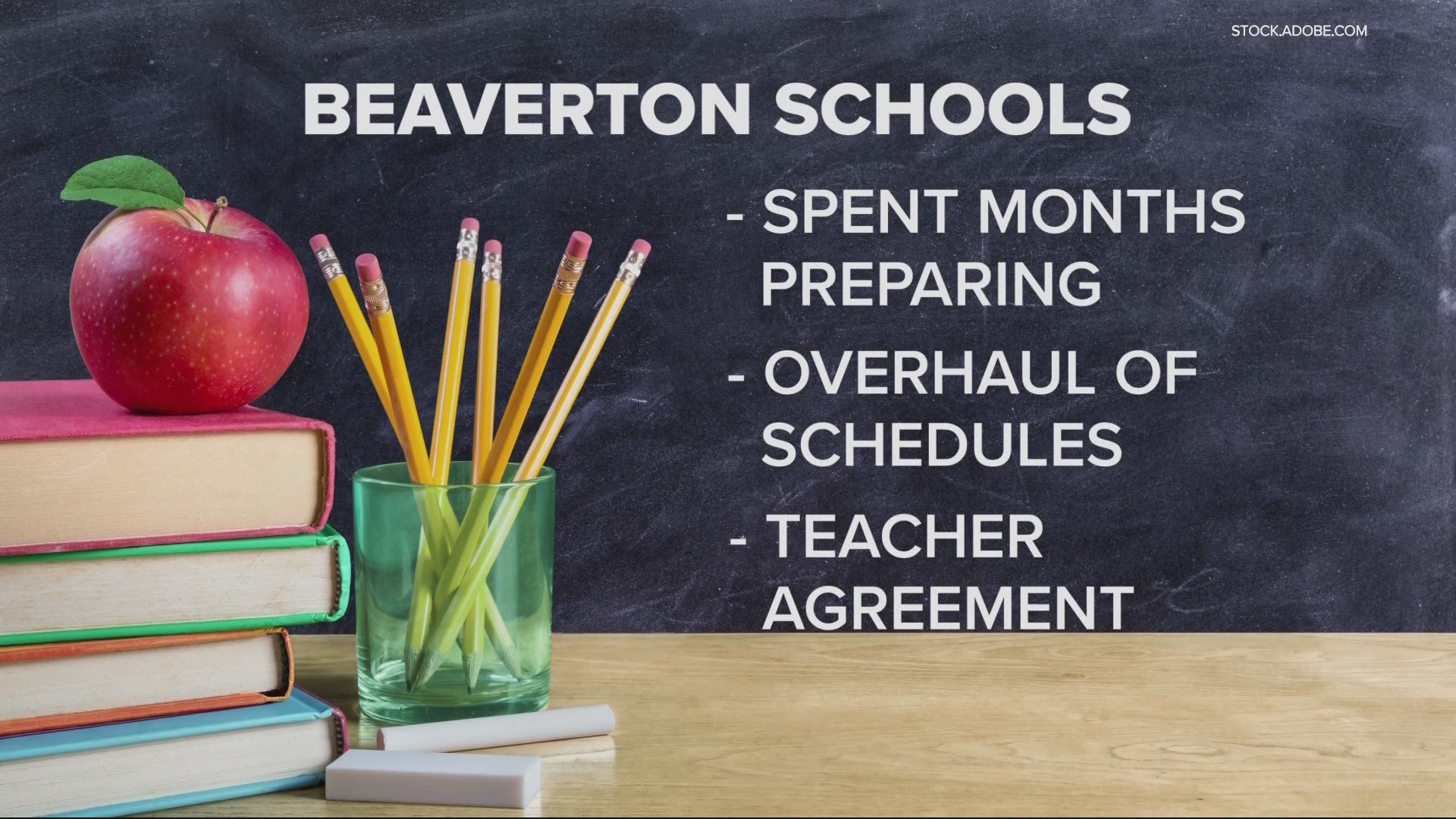 On Monday, the Beaverton School District welcomed back its youngest students, kids in pre-K through second grade.

“It was just exciting and joyful and probably my favorite first day of school yet,” said Fennell.

She said out of her 27 kindergartners, 20 of them came back for in-person, hybrid learning. Fennell said her students did well adhering to safety measures.

“I was so impressed with how they were able to wear their masks the whole time and stay at a distance,” said Fennell. “They’re so excited to be back and they really want to do a good job, and they want to be there. So, they’re doing a great job with all of those safety protocols.” 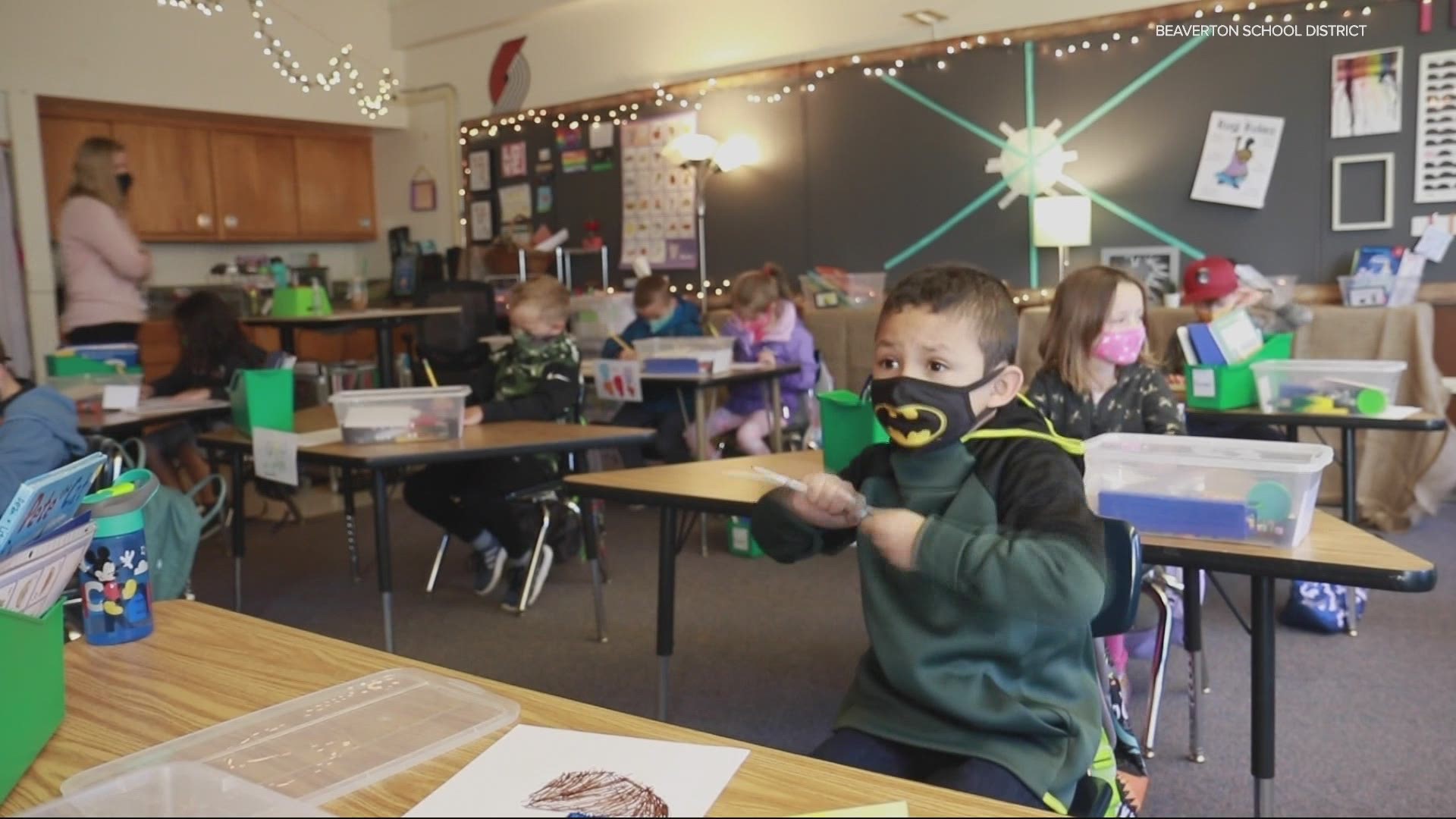 Percentage of families who chose hybrid

At Fennell’s school, Raleigh Park, the district website shows about 66% of families chose hybrid. The rest are sticking with online learning either because they chose that option or didn’t make a choice.

A spokesperson with the district said overall about 48% of families with kids in elementary school chose the hybrid learning option.

Looking ahead, according to the Beaverton School District's website, the district plans to bring back students in third grade through fifth grade on April 8, then start hybrid for middle school students on April 19 and the first of two groups of high school students would begin a few days later on April 22.

Wendy Gibson has two kids going to high school in the district. Her daughter Emma is a senior and her son Ben is a freshman. They both attend Sunset High School.

Gibson said this past year has been tough on her whole family.

"They [the kids] definitely have experienced the isolation and the loneliness, and we’ve had a lot of tears around the house. All of us, even my husband," said Gibson. "It’s been a struggle. It’s really been a lot this year to juggle school and to juggle all of us being home and being under each other’s feet all the time."

That's why she's excited about any time her kids can spend learning in-person. But she said she was hoping for more.

According to the Beaverton School District, by the time school gets out for summer, high school students will have had 17 days of in-person classroom learning this school year and seniors in particular will have had 15 days.

Brandi Wachs, another parent in the district, has two daughters in high school, a sophomore named Mia and a senior named Ruby.

"We are more than ready to be back at school," said Wachs. "We have so many friends and family around the country who have been back in high school, so it’s been really frustrating to be kept at home this whole time."

"I think that being at home has kind of devalued school for my students," she added.

Like Gibson, she's is excited her kids will be getting some in-person school but also wants more opportunities for her kids and others.

She said with the updated federal and state recommendations reducing distancing between students from 6 feet to 3 feet, she wants four days a week of in-person learning instead of two and is hoping the district reconsiders.

"It really would maximize the amount of engagement and education that these students are getting," said Wachs.

In addition, Wach said additional time with adults and peers at school would help older students, especially seniors, end the year on a better note.

She said regardless, having a firm date on when her daughters will start hybrid learning has helped motivate her girls and get them excited about school.

Will districts change distancing from 6 feet to 3 feet?

When it comes to modifying the distancing rules, like Portland Public Schools, the Beaverton School District has already said there won’t be any changes to distancing this late in the process.

The hybrid start dates in the Beaverton School Districts are similar to those in other districts. Both Portland Public Schools and Tigard-Tualatin Schools plan to begin hybrid for high school students the week of April 19 as well.