The University of Portland has opened a Title IX investigation after a student emcee made misogynistic and racist comments at an athletic department event honoring athletes. 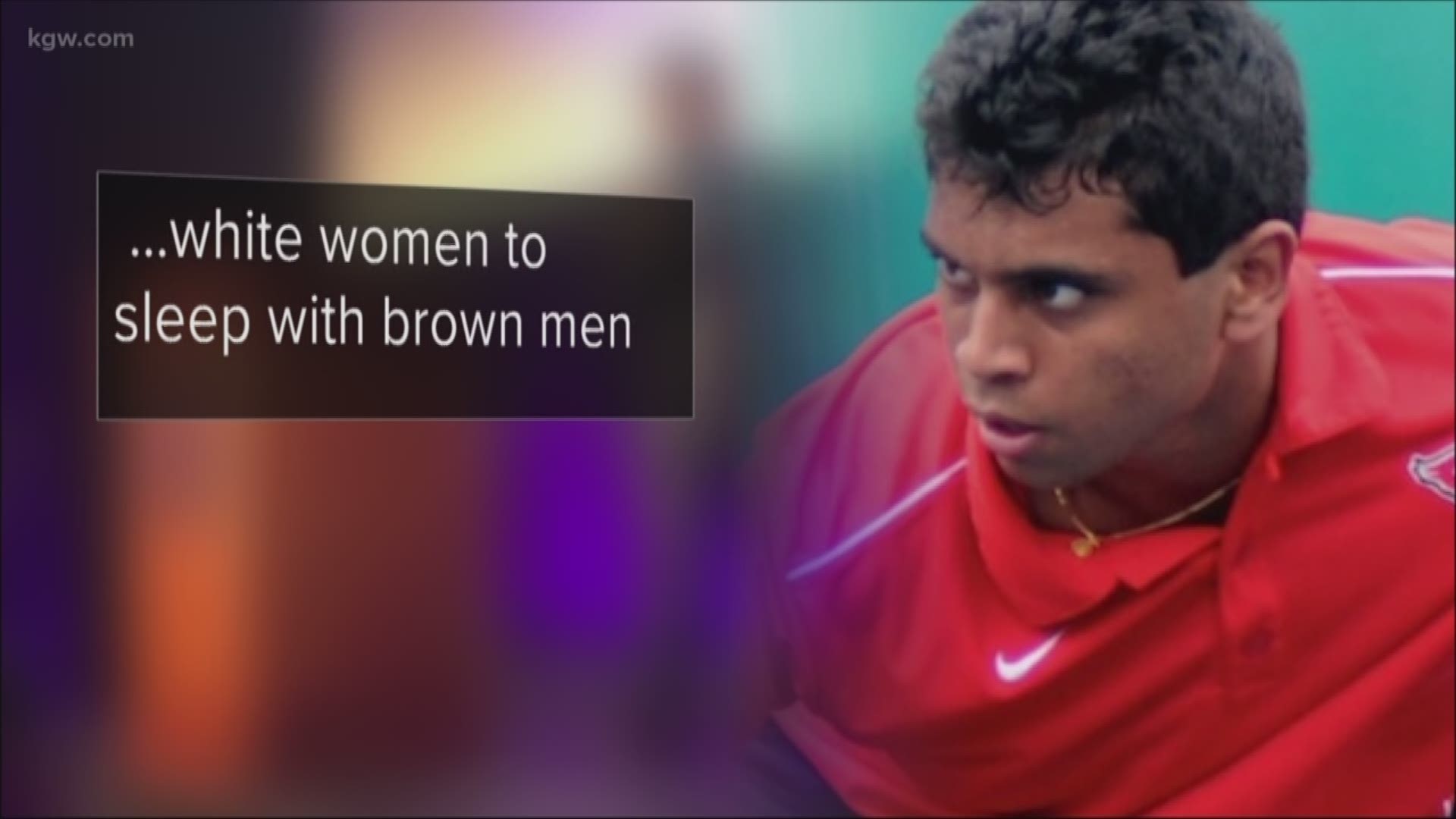 Reading this on the KGW app? Tap for the latest updates

PORTLAND, Ore. -- The University of Portland has opened a Title IX investigation after a student emcee made misogynistic and racist comments at an athletic department event honoring athletes.

President Father Mark Poorman made the revelation at a meeting of the Academic Senate, according to a report in the Beacon campus newspaper.

Title IX is federal mandate from 1972 that disallows any discrimination based on sex.

During the awards event, senior tennis player Goutham Sundaram remarked about sexual pursuits, including a goal of getting "white women to sleep with brown men." He made a series of remarks that reportedly included a reference that Ghandi fasted for 20 days so Sundaram could sleep with white women.

Goutham Sunderam as a senior at Lincoln High in 2014. (Photo: Danny Moran, The Oregonian)

According to the Beacon, students, faculty and staff were to be sent an email by a provost inviting them to submit their concerns, including to the school's Title IX coordinator. Submissions can be anonymous.

Poorman was seated at the front of the event and did not get up and stop Sundaram, the reporter wrotw. Others objected and walked out, including basketball coach Terry Porter.

Poorman apologized Tuesday afternoon for not getting up himself and stopping Sundaram.

"As president, I was in a unique position to stop the proceedings, and I should have done more," Poorman said in a prepared statement. "I am deeply sorry for what happened and for what should have happened, but did not."

Sanchez said the awards banquet, known as the Wally Awards, was mandatory for all athletes to attend. Even so, she said she got up and left during Sundaram's speech, shaking and unable to listen to anymore.

She wrote a detailed account in an opinion piece that appeared in The Beacon.

Another student who was also at the Wally Awards, Maya Murphy-Cook, disputed portions of Sanchez's piece in an opinion piece of her own.

While Sanchez declined to talk on camera, her fellow students weighed in.

“I could not believe what I was reading,” said Kaileigh Valentine, who is a junior at UP. “I was just outraged and appalled.”

She and other students on campus are condemning what was said at the mandatory year-end sports awards banquet.

“He really [was] way off topic. Completely inappropriate,” said Kevin Truong, a sophomore at the school.

In the opinion piece, Sanchez said the night meant to honor both male and female athletes was "tainted by the violent, misogynistic speech of senior men's tennis player Goutham Sundaram."

“Everyone agrees that it was poor thinking on his part,” said senior James Henderson.

“I cannot believe that is something someone feels comfortable saying, and that in and of itself is assault,” she said.

At one point Sanchez said Sundaram implied that "his parents' immigration would be worth it if he could 'hook up with a white girl."

“To take the courage to actually leave, especially if you're in a position of authority like Terry Porter, that’s pretty courageous,” said sophomore Brady O’Connor.

But Sanchez said others stayed, including the university president.

“They sat in the front row. And did nothing,” she wrote.

On Monday, Poorman issued a statement, preceding the second one he sent out Tuesday, that condemned the comments. He said he remained out of respect at an event to honor student athletes. He said the school has continuing work to do on tolerance.

UP issued a statement regarding what happened:

“Last night the “Wally’s,” an awards banquet organized and run by student members of an advisory committee to Athletics, was held to celebrate student athletes, teams, and Athletics staff for their many accomplishments in the past year. Unfortunately, the celebration was marred by shocking and offensive comments made by a student who was emceeing the event. People were understandably appalled by the student’s actions. We apologize that this has occurred. These offensive statements do not reflect the University of Portland, and they do not reflect our mission. Athletics has already taken steps to hold this student accountable, including removing him from the roster. Additional steps will be taken to address the conduct and any impact. There is no place at the University of Portland for what was said. It wasn’t funny, and it is completely inconsistent with the important dialogues that continue on our campus. Verbal or physical, it is still abuse.”

At the end of Sanchez’s opinion piece, she broke down why she wrote it. She said women do not owe men sex, Sundaram’s comments “glorified white women” and promoted a racist culture in which women of color occupied a second rung. Sanchez also said as a society we don’t talk enough about the sexist culture.

“I am not silent, and for that, I will likely never be the ‘cool athlete girl who’s in on the joke.’ But I never want another female athlete to feel objectified like that again. To feel her skin crawl and knees buckle on a night when her strength should be celebrated,” wrote Sanchez.

In a follow-up article, The Beacon published a three-sentence apology from Sundaram that said “I would like to address what happened at the Wally’s last night. I want to apologize for taking away from the focus of the night. The night is meant to celebrate the excellence of student athletes and I would like to apologize if I made any people uncomfortable.”

“I don’t even think that addresses the main issue at all," Valentine said. "He missed the point. It's never been funny. It never will be.”

Sundaram later wrote a longer apology, published by The Beacon Wednesday, and said he was "profoundly sorry" for his opening monologue.

"It truly breaks my heart to have caused pain to my peers because I did not pay attention to my own blind spots. I am committed to bettering myself and addressing those blindspots through discussions with my professors, peers, and community leaders," wrote Sundaram.

Some, including Valentine, questioned Sundaram's removal from the team, wondering if it's punishment enough since he’s already at the end of his senior year.

Valentine said all of this happened on the heels of sexual assault awareness week on campus.

KGW tried reaching out to a number of the student athletes mentioned in Sanchez’s piece. One initially agreed to speak with us, then soon after said they could not after all, then directed us to the school’s media spokesperson. None of the other student athletes spoke to KGW about what happened.