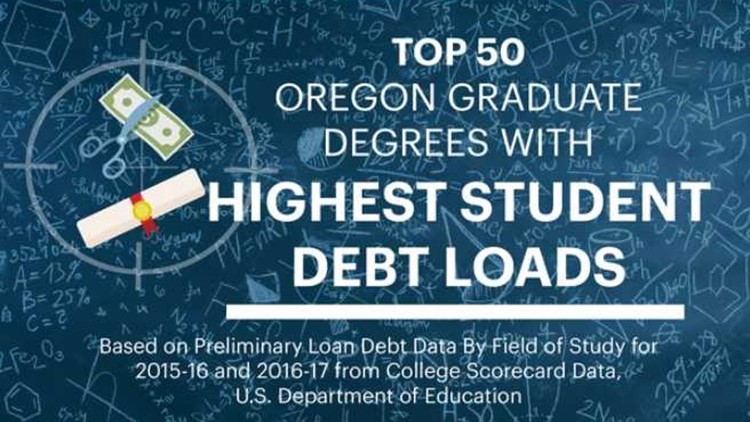 These degrees leave Oregon grads with the most debt

PORTLAND, Ore. — A graduate degree is a good way to further a career or fulfill educational goals, but owing $69,265 with a newly earned diploma can give a prospective grad student pause.

That dollar amount represents the debt load carried by a student with a master's degree in international business from Portland State University, No. 42 among the 50 graduate degrees with largest debts for Oregon students.

According to data from the U.S. Department of Education, a graduate degree from Oregon colleges and universities can saddle students with up to a quarter-million dollars in debt. Some of the highest debt loads on the list are in medicine and law, lucrative occupations for degree holders. But liberal arts degrees, like a master's in fine and studio arts from the Pacific Northwest College of Art, are also represented on the list and can carry a debt above $80,000.

Most of the degrees on the list are master's, with 22, but doctorates and professional degrees are also represented. Pacific University makes the most appearances among the 50, followed by Oregon Health and Science University. Overall, 33 degrees listed are from private schools and 17 are from public institutions.

For those considering a graduate degree, the numbers on the list could help guide a decision. Or for those paying back debt, the list shows how their cohort is faring after graduation.

Gallery: Degrees that leave Oregon grads with most debt