Teachers we spoke with said they don't feel safe going back to in-person learning at this time. 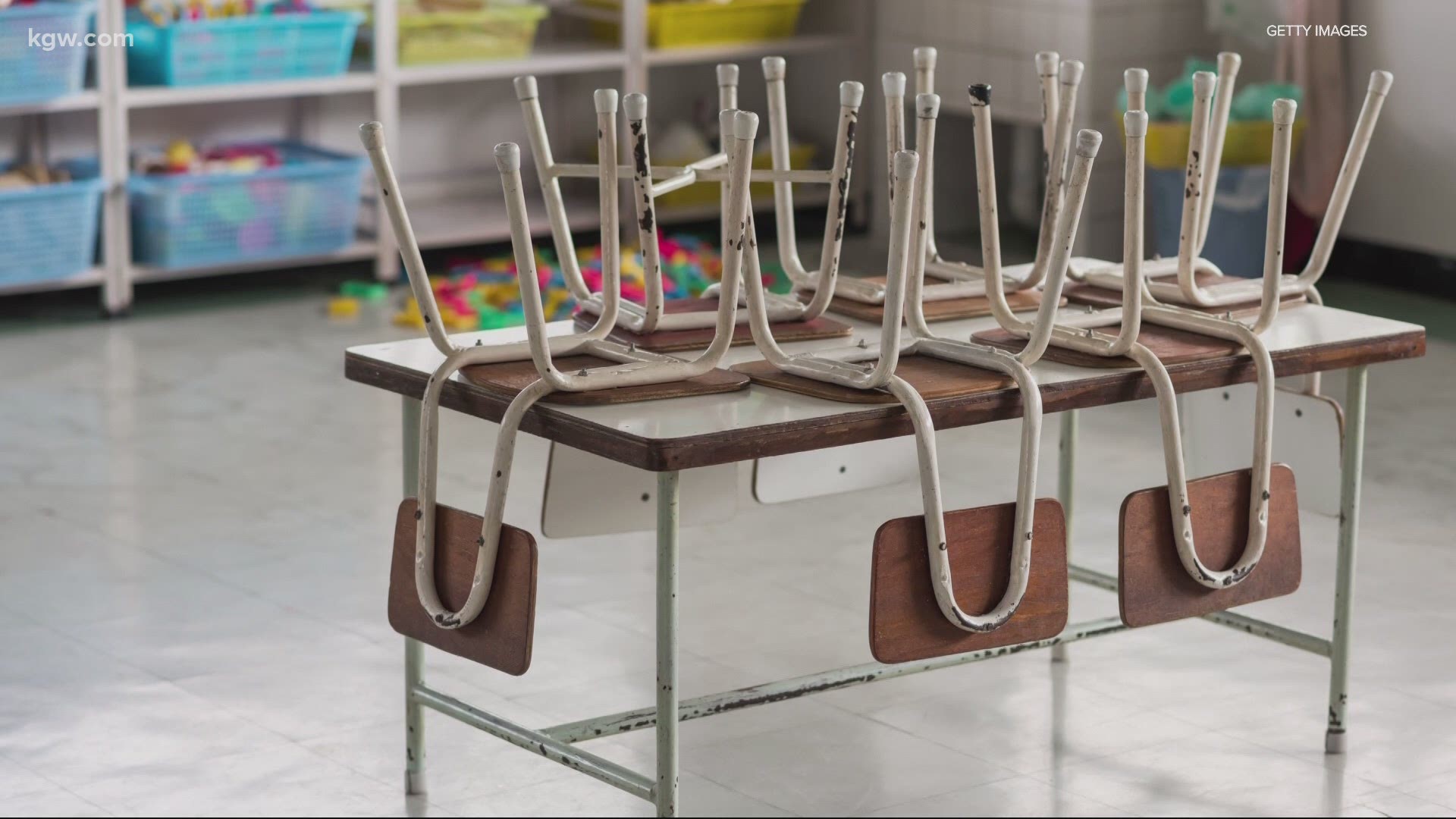 VANCOUVER, Wash. — Right now school districts in Washington are moving toward getting more kids back for in-person learning, many through a hybrid model.

In mid-December, Washington Governor Jay Inslee announced a phased-in approach to in-person learning and it’s already in progress in many districts, starting with elementary school kids.

But some teachers in Southwest Washington say they’re not comfortable with it.

“So many educators and families of students are concerned about Governor Inslee's recent change to the state guidance, to a rush a reopening of public schools in Washington State,” said Adam Aguilera, who teaches middle school language arts in the Evergreen Public School District.

He said he has a family member in California who teaches elementary school.

“Within two weeks of being forced back into the classroom, he contracted COVID-19 and his classroom had to be quarantined,” said Aguilera.

While state officials point to research that shows limited risk of COVID transmission in schools when safety measures are followed, Aguilera and some of his colleagues aren’t so sure. They cited a study that came out in December, involving multiple universities including the University of Washington.

It looked at the relationship between in-person schooling and COVID-19, specifically using data from Michigan and Washington. It found, “some evidence that in-person modality [schooling] is associated with increased COVID spread in communities with relatively high pre-existing levels of COVID.” That is similar to what other health experts have said, that school transmission mirrors what’s happening in the community.

The study also pointed out that there was additional community spread when cases on average were above five per 100,000 cases.

At the time of this story, Clark County was in the “moderate” category for COVID-19 activity. The most recent data, from January 4th showed about 325 cases per 100,000.

Since the airing of this story, Clark County Public Health officials posted an update showing the COVID-19 activity at "high" with about 398 cases per 100,000.

The teachers we spoke with think that’s too high and they also have other concerns, including school buildings' aging HVAC systems and general ventilation.

“My colleagues wanted to point out that some of them work in rooms with windows that don't open that are entirely interior and there's no ventilation,” said Rebecca Frommlet, a French and English teacher at Ridgefield High School.

Teachers are also worried about activities throughout the school day that would either mean students take off their masks or travel through highly-used areas.

“All those kids are gonna need to eat lunch. All those kids are going to need to use the restroom at some point during the day,” added Michael Sanchez, the band director and chair of the music department at Skyridge Middle School in the Camas School District.

In addition, they say there’s a lot of pressure for teachers to go back in person and there’s not much recourse for teachers who feel uncomfortable with it.

“A lot of educators are feeling pressured is to either be forced to work back in the building, or  to retire, or take leave and go unpaid and lose their income. A lot of our educators are single family households. They are the sole provider for their family,” said Aguilera.

“They're not giving us the option to stay remote,” said Amberlynn Lane, an elementary music specialist in the Evergreen School District.

RELATED: Older Oregonians upset teachers set to get COVID-19 vaccine before them

Lane said she has health issues that put her in a high risk category. She feels her only two options are to stay home without pay or teach in person.

“As a specialist in the elementary school, my risk level, my exposure level, is tremendous,” said Lane. 'They are asking me to go into each classroom and have a day with every single student in the building. So, I'm going from my household of five--and I have not expanded my bubble--to, they're asking me to, expand my bubble to hundreds. I'm terrified that's not safe."

She said she can think of multiple other colleagues who feel the same way. However, the concern is if teachers decide to take leave or if they are assigned to another position altogether, there may not be enough substitute teachers.

“There's not going to be enough staff to cover those sorts of things,” said Sanchez.

Lane also said the remote education she’s giving right now is actually a higher quality music education than she’d be able to give in person right now under current circumstances.

“They won't be able to share instruments. It's going to be tremendously restrictive."

Frommlet said the quality of teaching other subjects and grades may also suffer if teachers are too busy fearing for their lives or others’ lives.

“I'm hugely concerned that when we move to hybrid, if we do so before teachers feel safe and confident, and the logistics have been worked out and their questions are answered, the students are going to end up with a lot of unhappy teachers whose focus is not on creating relationships with students and creating a safe space for them and helping them learn and making them excited to learn. But we're all just going to be in survival mode,” said Frommlet.

“With a vaccine on the horizon, how can we tell our educators that they have to be forced to go back before they're even given the option of a vaccination,” Aguilera said.

Teachers also cited inherent inequities. Frommlet gave one example involving school buses. She said parents who can afford to take their child to school every day may have less exposure risk than kids who need to take the bus.

Sanchez said none of the options available to teachers and families are ideal but the one that makes the most sense to him is staying home, which would keep people safest the longest.

The teachers also pointed out that there are teachers who do support going back to in-person learning. However you look at it, if and when kids do go back to school, it won’t be like it was before COVID-19. They’re still going to be isolated to a degree because they’ll have to sit 6 feet apart and wear masks.