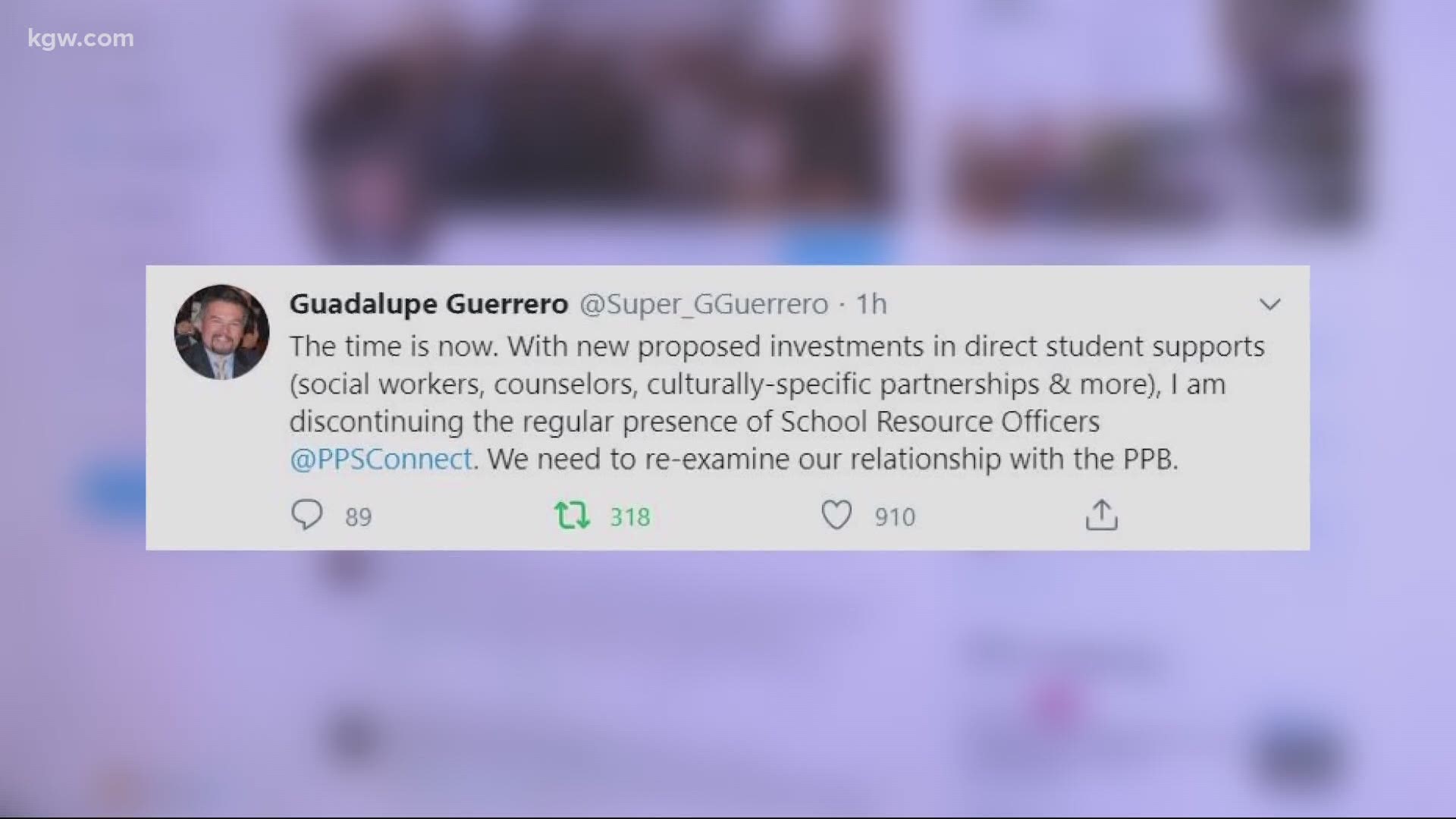 “We need to re-examine our relationship with the PPB,” Guerrero tweeted.

Portland Mayor Ted Wheeler tweeted his agreement with the decision, saying “I am pulling police officers from schools.”

Wheeler later clarified that SROs will no longer be present in Parkrose schools and David Douglas schools, in addition to PPS. All three school districts are in Portland.

“Leaders must listen and respond to community. We must disrupt the patterns of racism and injustice,” Wheeler said.

During a Thursday afternoon press conference, Wheeler said that both he and Guerrero came to the same decision to eliminate SROs independently.

“The community wants this. We’re listening, and we’re doing it,” Wheeler said.

“I’m committed to doing everything I can to disrupt the patterns of injustice,” said Wheeler. “This right now is about the community telling us what they need.”

Wheeler said he has taken input from City Commissioner Jo Ann Hardesty, who he said has advocated for the change.

Wheeler, who serves as both mayor and police commissioner, also announced that he eliminated the PPB youth services division, and is reassigning those officers to patrol and other duties.

The mayor also announced that $1 million will be taken from the PPB budget and used for a "community driven process" to support and nurture positive experiences for black children.

Wheeler said the safety of children is paramount and PPB will figure out how to ensure school safety with response strategies to violent events such as school shootings.

KGW reached out to PPS Superintendent Guerrero for comment. A spokesperson said he was not available, but his office sent a memo from Guerrero to his leadership team.

In 2019, a plan that would have expanded the presence of school resource officers in Portland was placed on hold.

What are people saying about the decision?

On Facebook many of the comments are from people who disagree with the move and are worried about school shootings.

Montana Howell wrote, "Hope they personally charge or sue the people who voted on this the next time there's an emergency that could have been stopped by the officer."

Holly Anderson said, "This is hands down one of the, if not the biggest mistake that they could ever make!!!"

But there are people who support the decision to remove officers from Portland Public Schools.

Tanner Casey said "Good. Police in schools routinely makes for a miserable experience for anyone that isn't white. Seeing the way that police behave, I wouldn't trust them to be anywhere near kids."

On Twitter, Vivian Satterfield said, "This is precisely how we need your leadership as superintendent. The time is indeed now!"

What will happen to school resource officers?

School resource officers will keep their jobs. They will just be transferred to other assignments.