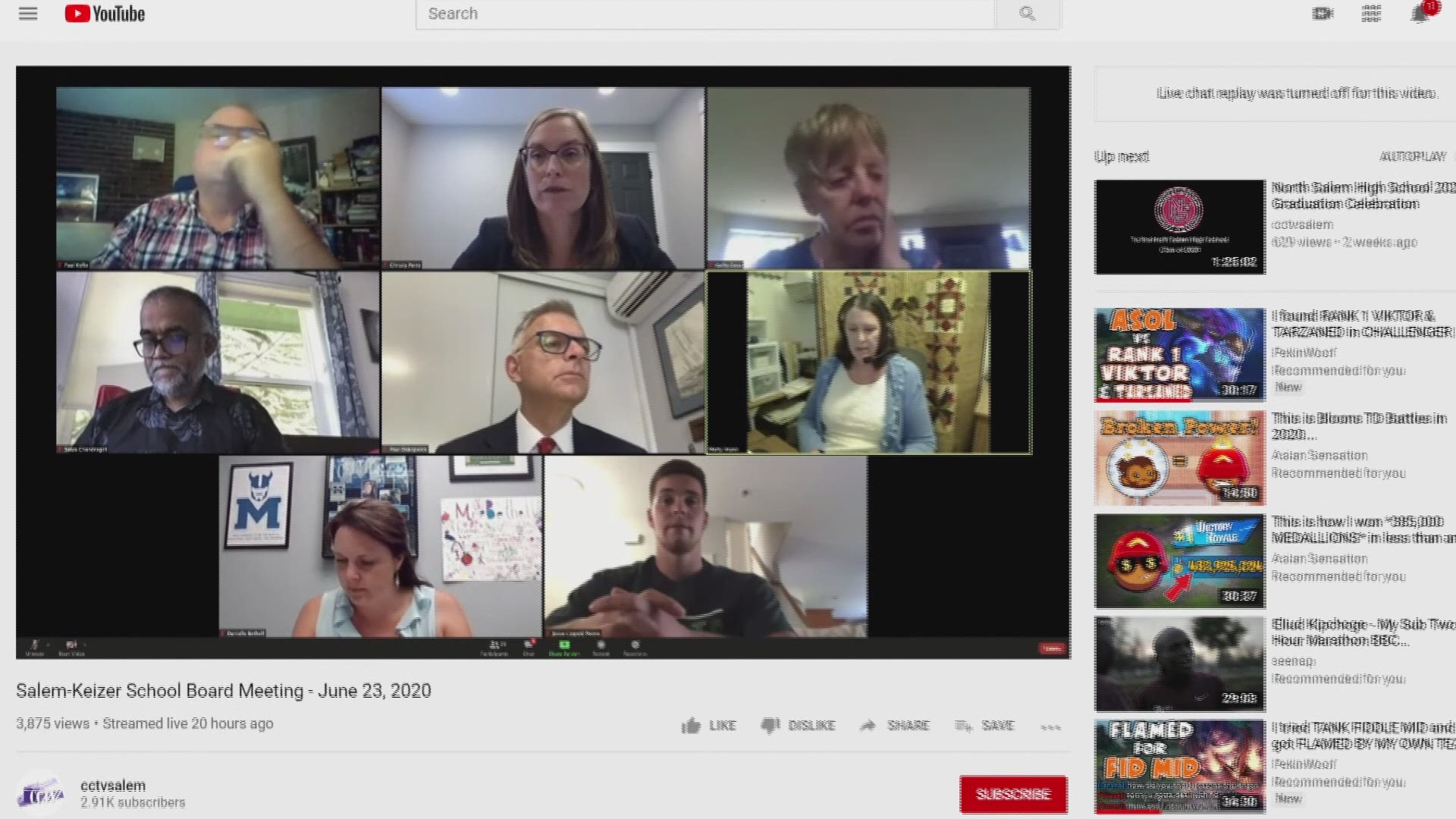 SALEM, Ore. — Race and equity issues are taking center stage for school district across the state and country.

On Tuesday night in the Salem-Keizer School District, a school board meeting was emotionally charged as community members and the superintendent gave board members an earful.

The board meeting started off like any other, but soon hard discussions were had.

One of those discussions centered on a March 30th board meeting where board director Paul Kyllo held an image of a black man up to his face for the duration of the meeting.

At this week's meeting, some board members addressed what happened.

“I just want to make sure I’m giving a sincere apology for what happened back in March,” said Jesse Lippold, vice chair of the board.

“I want to address the frustration built up around the actions of Director Kyllo,” said Marty Heyen.

“Our board policies guide myself and vice chair through a process of not publicly criticizing or embarrassing each other,” she said.

Heyen said Kyllo has had conversations with a representative of the NAACP, issued a public apology, and has agreed to meet and discuss what happened with a member of the Black community who had reached out to him.

Superintendent Christy Perry was also at the meeting and voiced her thoughts about the board’s handling of race and equity issues. In late May, she challenged district staff with the question: How are you going to be actively anti-racist?

“Tonight I feel I can longer challenge my staff, without truly demonstrating the same. So as a single employee of you, a seven-member board, I cannot sit quietly any longer,” Perry said.

“On behalf of our 42,000 students and over 5,000 staff members, I must stand up. If I can’t do this and speak truth to power, how can I expect it of everyone else in this organization?”

Perry said over the past week she’s met with students and parents who have asked her why she has not voiced her concerns to the board. She said the board has become distracted from dealing with the issues at hand. Perry referenced a meeting where she and the board heard stories about racism from their educators of color.

“It was one of the most compelling meetings we’ve had and then you as a board went right back to worrying about things like who would be the next board chair,” said Perry.

“I've tried to help you understand the experiences of our students of color, but you have discounted the students' experiences in multitudes of ways,” she said.

Perry said it was obvious that a couple members of the board were not listening to the community comments. In addition, she said board members have barely engaged with training opportunities meant to help them understand their own biases.

Every board member made their own statement after the superintendent spoke, except for Kyllo.

More than 200 community members weigh in

The community also weighed in during Tuesday night’s meeting. Some people had scathing remarks for the board. Many of the speakers focused on the issue of whether school resource officers should stay or go. Some wanted the money designated for SROs to be re-invested into education and programs benefiting students of color.

“The school to prison pipeline is very much real and it disproportionately impacts black and brown students,” said Raul, one of the community speakers who called in who was in support of removing SROs from the district.

One parent also described her son's experience with SROs. She said during an instance of police activity near the school, her son was held at gunpoint by officers, including two SROs, as he walked home from school.

Others were in favor of keeping SROs on campuses.

“Removing SROs removes the ability for everyone, especially students of color, to develop the care and connection with the human behind the badge,” Stanislaw said.

A woman who identified herself as a Deputy District Attorney for Marion County also voiced her support for SROs and the work they do to help investigate child abuse cases in tandem with DHS.

In total, the board heard from around 200 people who wanted to voice their thoughts on racial equity and SRO issues. The meeting was lengthy, lasting about four hours with a few short breaks in between.

At the end of the meeting, the board agreed to continue discussions with the community and district leaders about their concerns, with the goal of having a clearer path forward before school starts in the fall.

“We have a lot of work to do. We all acknowledge that,” said Heyen.

“I’m sorry if our delay in speaking has offended you. That is not our intention,” Heyen said.

RELATED: Students in the Tigard-Tualatin school district join the call for change