The classes are limited in size with a maximum capacity of 25 students, who are spaced apart due to COVID-19. 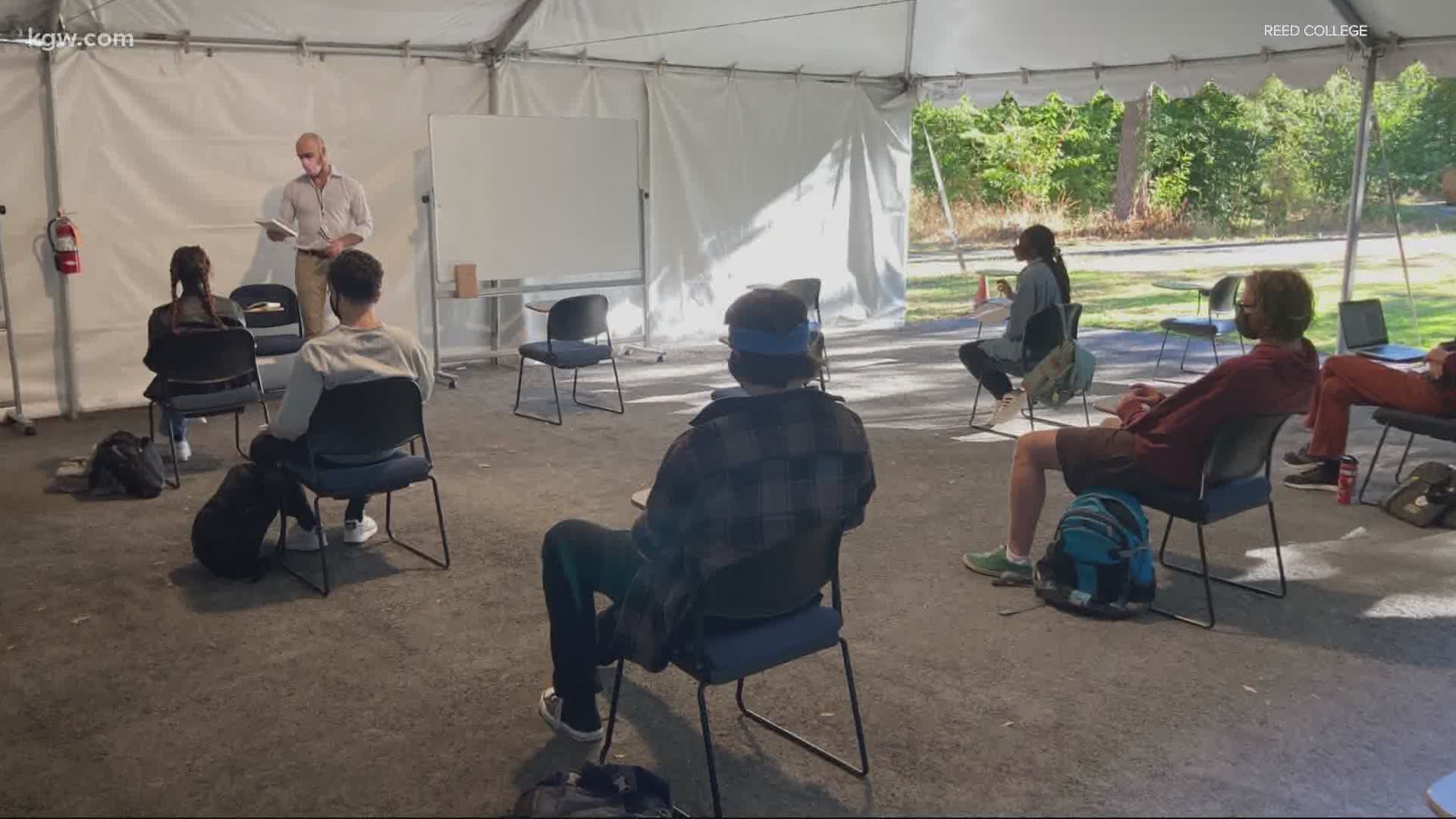 PORTLAND, Ore. — For students at Reed College, attending an outdoor class in-person might require a bit of musical history. Three tents have been set up on the campus for in-person learning, held outdoors. The tents are named Earth, Wind & Fire.

Michael Breen is a professor teaching early modern humanities and history on the French Revolution at Reed. He started the year online so the students could see each other's faces without a mask, but then moved to one of the tents outdoors to see his students face-to-face.

"So far, it's a little surreal. I guess I would say, the context and the environment are very different," Breen said. "It feels a little more special in a way, in that you can see with the students, we had our first in-person classes yesterday, just how much it meant to them to be there in-person, in a classroom setting."

Desks are faced forward in the tents as opposed to a more circular set up to allow for proper separation between students. The maximum amount of students in any in-person class at Reed will be capped at 25. Breen said the most he's had has been around a dozen and masks are worn by everyone.

"I think you have to be more attentive to how you're projecting with your voice. You, perhaps, have to be more intentional with how you space yourself, relative to everyone else," Breen said.

Breen said, had outside not been an option, the choice would've been made for him.

"I think if it were not for the tents and what they make possible, I would be teaching online as well. I would not be teaching in an indoor classroom," he said.

Reed, like other colleges on the semester system, started earlier in the year than the major universities like Oregon and Oregon State. Oregon State doesn't start until Sept. 23.

RELATED: Colleges and universities releasing plans for online and in-person classes this fall

That later start date gives them a little room to see how things work at those starting earlier. At Oregon State, around 95% of classes in Corvallis will be held online.

Here's a few illustrations from @OregonState about how they envision in-person classrooms to look.

They say 95% of classes in Corvallis will be held online. pic.twitter.com/yZAOjeRm8E

"It will look different this year, in a few ways," said Brain Stroup, director of operations with housing and dining services at Oregon State. "The move-in is typically one day and so we usually have thousands moving in one day.  We've spread move-in over five days. We'll have five days where students will come and before they actually get their key to their room and building, they're going to go through a testing process for COVID-19."

Another change: dining halls will have to-go food only with limited outdoor seating.

"It'll be all the same high quality cuisine we provide, but in a to-go format," Stroup said.

Back at Reed College, nice weather has made the transition to outdoor learning feasible, but when colder and wetter weather comes, Breen said his classes will adapt and most likely move to online only.