Cook said that she spoke with junior high staff about what happened and was told that two of the three students who were involved in handing the note to her son received "in-school" suspensions. 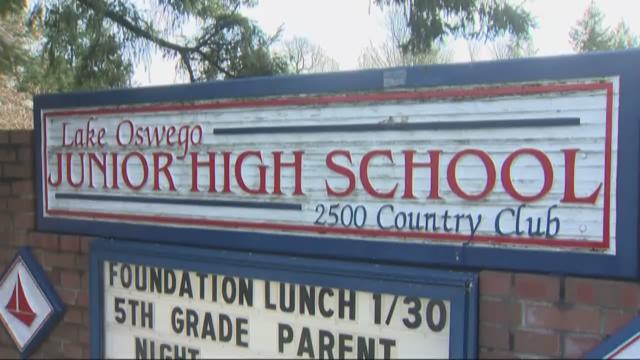 LAKE OSWEGO, Ore. -- A mother is calling for action after she says her son was the victim of a racist note at Lake Oswego Junior High School.

Jennifer Cook said the incident happened last Friday. Three white students handed her son, who is African-American, a note with the N-word on it. While the Lake Oswego School District says there were consequences for a student involved in the incident, Cook believes that not enough is being done.

“I got down [to the school] and found out that three kids had written a racial slur on a sticky note and handed it to my child,” Cook told KGW. Her son, Christiaan Bedford, is an eighth-grader at the school. “It breaks my heart. It makes me feel like on some level I’ve failed my son.”

Cook said that she spoke with junior high staff about what happened and was told that two of the three students who were involved in handing the note to Christiaan received “in-school” suspensions.

Cook says those students weren’t sent home for the day.

“I didn’t feel that was sufficient,” she said. “I felt like they had an opportunity here to take a really hard stance, to say, ‘We won’t tolerate this. This is not OK. We have a zero tolerance policy.’”

Christiaan, she said, felt scared. Cook said her son has heard the N-word at school before.

“I feel like he should come to school and he should feel safe,” she said.

In terms of the students who handed the note, she said, “They should not be here. And that should be the message.”

In a statement, the Lake Oswego School District said a “racial incident” occurred at the school.

“School administrators responded immediately with consequences for the student, but more importantly administrators are working with the involved students using restorative justice strategies,” the statement said. “LOSD does not tolerate hate speech, bullying, harassment, or any other type of behavior that makes students and parents feel unwelcome in our schools. We actively root out and address inappropriate actions and behaviors that don’t provide for safe and welcoming learning environments."

A district spokeswoman declined to speak on camera about the incident, and instead directed questions to a local anti-racism activist. Willie Poinsette, with the group “Respond to Racism in Lake Oswego,” told KGW that she spoke with the junior high principal about the incident.

“I think that we need to deal with the situation. Acknowledge what happens, and make it a learning experience. A learning experience for everyone,” Poinsette said. She added that the group and the junior high had developed a plan to address the issue, but declined to elaborate further.

Cook, meanwhile, says that the school’s principal seemed to make excuses for what happened when the two spoke about the incident.

“It was a lot of sympathy for the abusers. But nothing really centered around my son,” she said.

“I have found that when these words are used, the students have a hard time explaining their intent – they may claim it was meant as a joke, they did not connect the word to the meaning, etc. I believe them. That is why it is on all of us as the adults in their lives to help them understand how we cannot allow these words to be part of jokes or allow them to be thrown around as if they had no meaning.”

Cook said that she filed a complaint about the incident with the Southern Poverty Law Center and was speaking with local activists about what happened. Poinsette’s group is planning a community meeting about racism. An event, according to a Facebook post, is planned from 6-9 p.m. on Feb. 5 at the Lake Oswego United Church of Christ.