Budget cuts and bad blood: What happened to a program to recruit teachers of color in Oregon

More than 80 Portland Teachers Program alumni and the former director said their program is over. But Portland State University officials said it never ended. 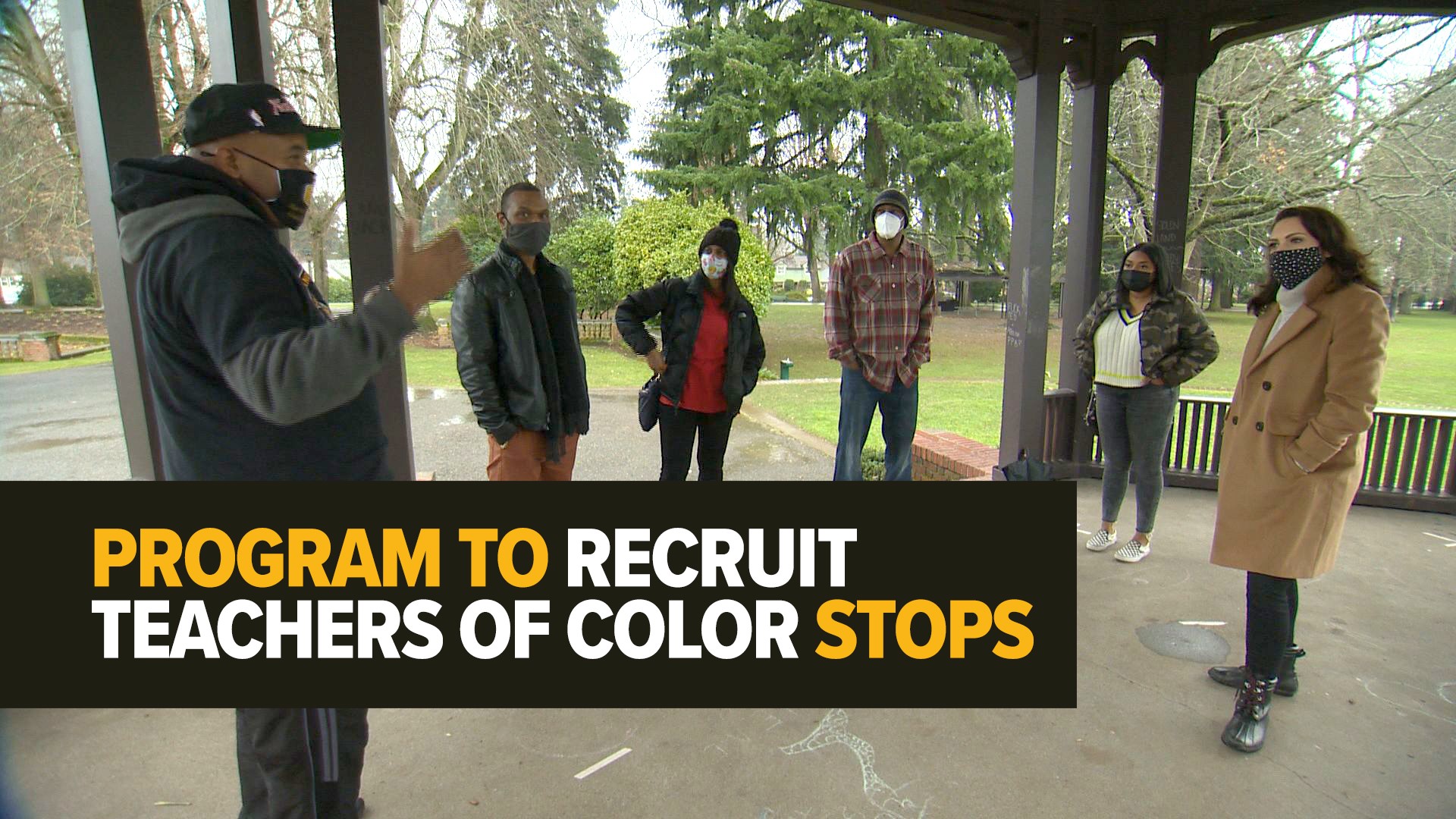 PORTLAND, Ore. — The Portland Teachers Program (PTP) was one of the longest-running programs to recruit teachers of color in Oregon.

PTP started in the 1980s after calls from the Black community to get more educators of color in Portland Public Schools classrooms.

“PPS had no black teachers, no black administrators at the time,” Herndon said.

Deborah Cochrane, who worked for the Urban League at the time, was recruited to start the program.

“That was a genius move hiring her,” Herndon said.

Cochrane started and ran PTP for three decades with the mission statement of “listen, learn and serve.”

Teachers would go to undergrad at PCC, get their master’s degrees at PSU and then get hired at PPS or BSD.

The intense teacher training program focused on anti-racism, learning other cultures, and embracing your own.

“Racism, white supremacy, like, we've talked about so many things that you don't talk about in a normal program, but that you need to talk about, to deal with, to be an efficient and effective teacher,” said Brown, now a student climate specialist with Portland Public Schools.

Lionel Clegg, a first-grade teacher at Woodlawn Elementary School, said it shaped him as an educator.

Clegg was featured in KGW’s docuseries “Inside Woodlawn” and later NBC’s Today Show during a piece about the lack of Black teachers across the county.

“I’ve said this in the past: PTP is family,” said Clegg.

“I think as PTP teachers, you know, we’re taught we need to stand up for injustices and stand up when we see something that's not right,” said Lowery. "I mean, that's the whole value of our program."

Lindell Stone, a student climate specialist for Portland Public Schools, found PTP at a personal crossroads. He'd spent 20 years at a technology company before he discovered PTP and became an educator.

“There was something about this program that made it unique," Stone said. "And a lot of it had to do with not only the expectations that the director had for the students within the program. but the comradery."

Breanna Vance, a teacher for Portland Public Schools, said PTP helped her discover who she was supposed to be.

“I started changing the way that I live my life," Vance said. "I started making better decisions and it was because Deborah would push us to be better."

PTP alumna Mercedes Muñoz was named the 2020 Oregon Educator of the Year.

“PTP means many things to my life, but I think in the immediate, I don't know that I would have found my path to teaching without PTP,” said Muñoz.

The program cost PSU more than $500,000 a year, to pay for the tuition and fees for PTP students.

In the spring of 2019, with enrollment and revenue down, Portland State University was facing a budget crisis.

PSU College of Education Dean Marvin Lynn told the current PTP students they would no longer offer the full tuition waivers; students would have to pay for half their tuition.

This was a shock to students, and not part of the original deal.

According to alumni and to Cochrane, the coursework and high expectations made it nearly impossible for PTP students to have a job outside of their classwork.

“When you have a group of graduates in the middle of their term, telling them that they're not going to be able to finish, but they've got to come up with all kinds of money on the fly, with no warning, I don't feel like that's honoring the contract,” said Muñoz.

The decision was later reversed and those PTP students finished the program without paying tuition at PSU, but the damage was done. This caused a rift between the PTP alumni and dean Lynn.

In a letter written this month by 86 PTP alumni and addressed to the community, alumni said PSU was not transparent during this process and the partners didn’t fight hard enough the keep the program going.

The letter states, in part, that PTP’s director, Deborah Cochrane, resigned over “difficulties of dealing with PSU leadership, the silence and lack of support from the other partners, and long-standing inaction at the state level, as well as a refusal to be part of the dysfunction that was impacting students and the integrity of the program.”

There has been no full time PTP director since December of 2019, and they haven’t accepted new students into the program since 2017.

According to Lynn, when they do accept new PTP students some of them will have to pay half their tuition at PSU.

And they probably won’t use the PTP name because alumni asked them not too.

Despite all of that, Lynn has been adamant that PTP was never over.

“I think it's unfortunate that our alumni believe that," Lynn said. "That's not true. The program has not ended. The program is moving forward. The program is going to change a little bit. Some of that is because of the cost containment measures that I talked about and that is something that all public universities are dealing with."

According the letter, the PTP alumni are not against a program to recruit teachers of color, but they are against PSU claiming it’s still PTP.

“It's easy for them to say that this is still PTP because they don't know what PTP is," Clegg said. "You can't copy something that’s genuine and sit here and just put a stamp on it and say that it's still the same thing."

Clegg and the other PTP alumni said without Cochrane there to train the new director, without all the alumni to act as mentors or take on student teachers, and without full tuition waivers it’s just not the same successful program they went through.

“Whatever program that they’re trying to start, we’re not part of, so it’s not PTP," Brown said. "It’s not the same thing without our director and without our alumni. If there's a program, if you don't have any of your PTP alumni supporting it or backing it, I wouldn't go for it."

They said Lynn’s insistence that PTP never stopped shows a real lack of understanding about what made this program so successful for so many years.

“And I know personally, in raising some of the concerns privately with Dr. Lynn, it was just like a big circle: ‘I'm going to circumvent what you're talking about, and this is my agenda. And by the way, will you do this?’ I think he's missing the ability to listen, learn and serve,” said Muñoz.

Lynn, who became dean in the summer of 2017 and made budget cuts soon after said he understands why some people blame him for these issues.

“I certainly would too if a new person came in and asked me questions, and then was faced with a budget challenge and had to make some decisions right away that changed the nature of the program,” said Lynn.

He said he has a deep desire to connect with the PTP alumni and develop his own relationship with the group.

Representatives with Portland Community College and Portland Public Schools said they are committed to the program and alumni.

“I'm aware that there's skepticism and some distrust,” said Kurt Simonds with Portland Community College. "But I am hopeful that they will see that we are there, we're all in on this commitment, and that we need them."

All the partners said PTP will not work without the support of the alumni. Lynn has invited them to a Zoom meeting to “shape the future of the program” on Feb. 19.

“You didn't put the work in, you didn't build the foundation," Vance said. "You weren't there when times were hard. So, you can't say that you are continuing something."

According the alumni letter, they "hope to start a fund with a threefold purpose: to provide financial assistance to students of color in the Portland-Metro area who want to become K-12 teachers; to fund educational projects like a PTP Saturday Freedom School; and to organize professional development opportunities around culturally relevant pedagogy and radical change in public education and teacher education.”

Inside Woodlawn: No Time to Waste