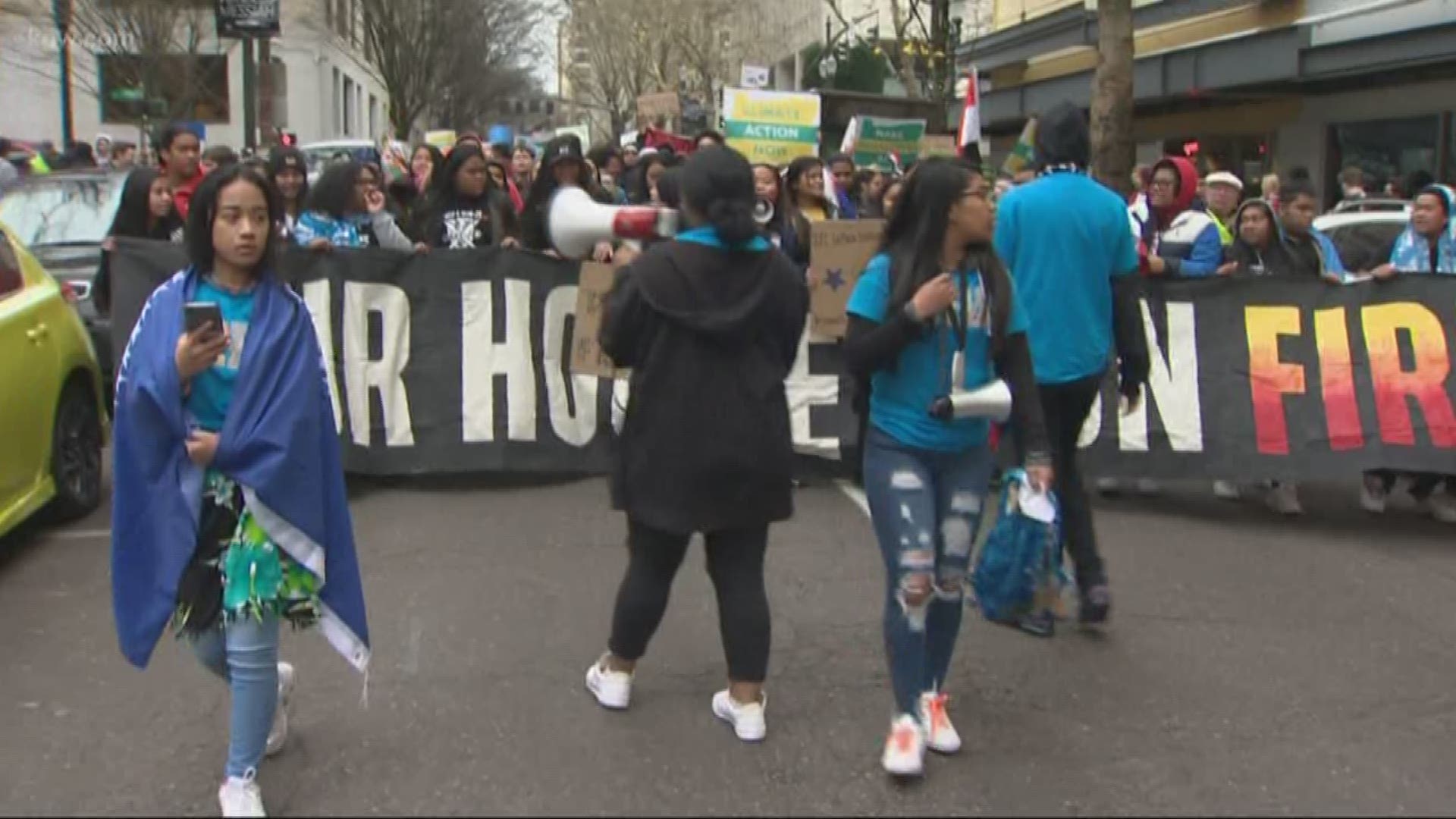 PORTLAND, Ore. — Hundreds of Portland students left their classrooms Friday to take part in a march and rally drawing attention to the global climate crisis.

Frontline communities, meaning those most impacted by climate change, including environmental degradation and rising sea levels, were front and center during this strike.

Indigenous and Pacific Islander communities say their homelands are hit hardest by climate change, and it's critical their voices are included in all climate justice conversations.

This was the second climate strike of the school year.

Students and other demonstrators first gathered at 10:30 a.m. in downtown Portland's Shemanski Park for the rally.

"Indigenous communities are suffering first and worst," student demonstrator Kaiya Young added. "As a white person who isn't suffering as much I feel the need and responsibility in my heart to take on some work for them, to do the leg work and put in the work so their homes and their communities aren't destroyed."

From there, the group began marching around 11:30 a.m. Students marched down Southwest Salmon Street and onto Southwest 3rd Avenue.

After the march, demonstrators met shortly after noon at Terry Schrunk Plaza, where organizers with Portland Frontline Youth Communities and Allies gave a list of environmental-policy demands to Mayor Ted Wheeler and Portland's commissioners.

"Inspired by the everlasting dedication of Indigenous and Pacific Islander communities, students from around Portland have come together to plan a local strike in order to demand that real tangible action is taken against the climate crisis," youth organizers said in a joint statement.

Mayor Wheeler was at the rally at Terry Schrunk Plaza and accepted the list of demands from students.

Organizers are demanding city hall declare the current situation an international climate crisis and create policies and laws that protect the planet and end contributions to fossil fuels. They also ask the city put frontline communities at the center of every conversation about climate justice in the City of Portland.

"You must recognize that there is no time left for many of the Pacific Island regions and Indigenous homelands that have already been seeing the irreversible effects of climate change right now, and at faster rates than ever before," the document reads.

“On face value, they make a lot of sense," Wheeler said of the demands. "What they’re saying is they want front-line communities to be actively engaged and front and center in the conversations. You can hear there is a strong sense of urgency that this generation has around climate action."

Wheeler said he supports their goals and embraces the urgency of the demonstrators for climate action.

"There is no question these frontline communities, these historically neglected or ignored communities have suffered the most from environmental degradation," Wheeler said.

Mayor Wheeler says the city is prepared to declare a climate emergency and take steps and specific action. He is holding a press conference next Friday at City Club where he will reveal new environmental justice initiatives.

Wheeler was impressed with the students' call to action, knowledge and ability to lead this movement.

"There's a new day in America," Mayor Wheeler said. "They can’t wait till they’re adults. They need us to engage now in order to stop some of the climate problems that we’re seeing all across the planet; pollution issues and degradation of the environment. And there has been no louder voice on this issue of climate change than young people."

Portland Public Schools sent a letter to parents this week explaining that the district is not sponsoring this event, but that officials "do recognize students’ constitutional right to freedom of expression".

Their absences were excused if they pre-arranged with their teachers and told staff when they left.

"At all grade levels, we will do our best to support our schools, track who leaves school, and monitor the activity of student groups who choose to leave campus for the Climate Strike," the statement reads. "Once students leave school grounds, however, we cannot ensure their location or their safety. Please reach out to your principal with any questions or concerns."