A Portland Public Schools spokesperson said school principals will reach out to families this week. Students in grades K-5 will be prioritized first. 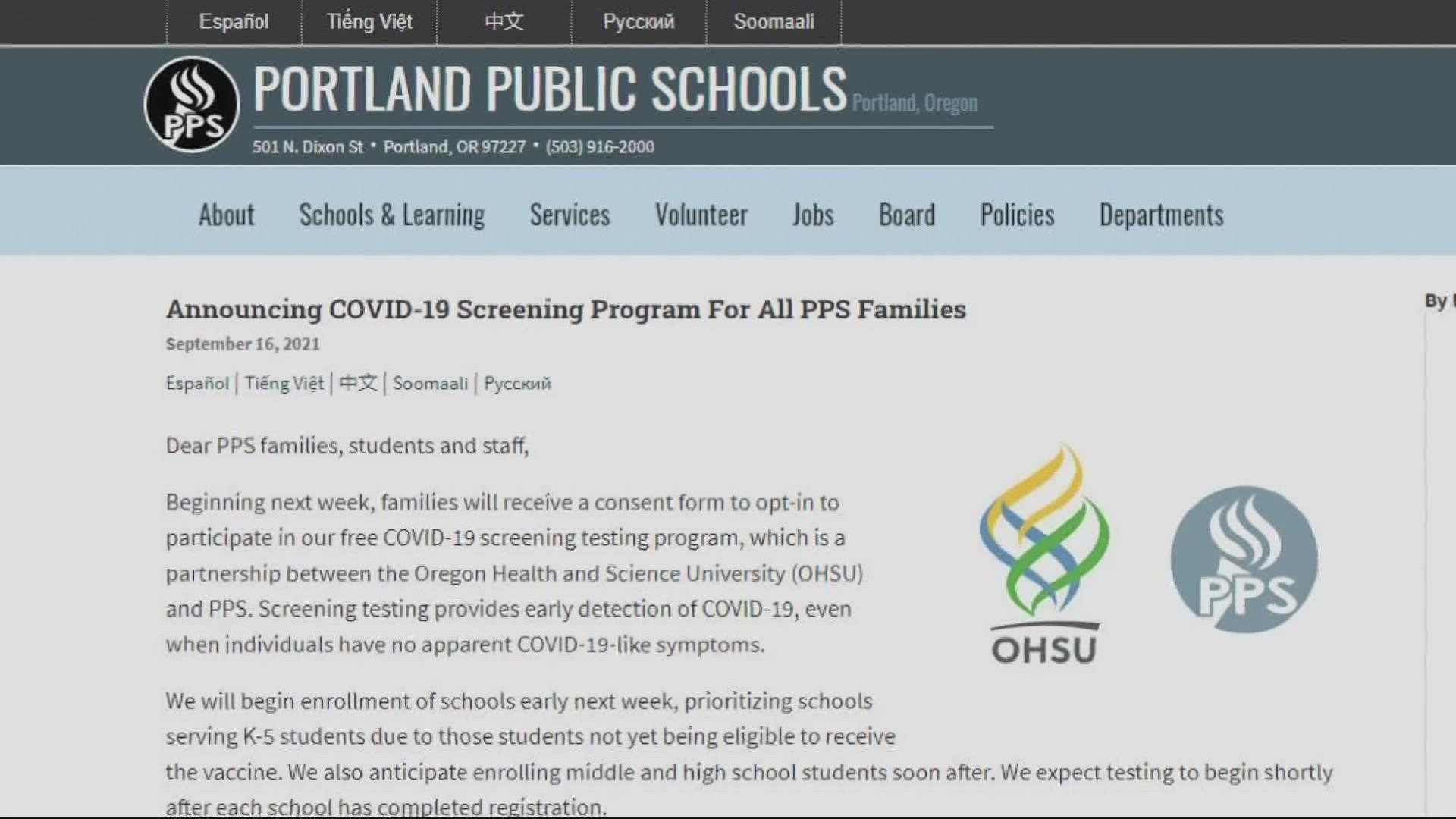 PORTLAND, Ore. — Starting this week Portland parents will begin to hear from their school principals asking if they'd like to sign a consent form and opt-in to free COVID-19 screen testing.

Rashelle Chase-Miller has two kids: a third-grader in the Portland Public School District (PPS) named Leo, and her youngest is in preschool.

Chase-Miller said in-person school for Leo has been going well, but she still has concerns about COVID, particularly the delta variant. Neither of her kids are old enough to get the vaccine.

“Out of my two kids, obviously worried for both of them, but I'm more concerned about my oldest. He has cerebral palsy and asthma,” said Chase-Miller. “His respiratory situation is something that we watch at the best of times, so I'll feel better knowing what his status is."

“I think it is a really useful tool. I actually wish that it was an opt-out situation,” Chase-Miller said.

Each week, kids who have opted-in will get a test kit. They take it home, collect a spit sample, then bring it back to school the next day. That sample goes to OHSU for processing, and families are expected to have results within 48 hours.

RELATED: Vaccine mandates for K-12 school staff in Oregon and Washington are among the strictest in the country

Kathryn Schmidt, who is also a parent with children going to school at PPS, intends to opt-in as well. She has two daughters, 10-year-old Merritt in fifth grade, and 13-year-old Ellery in eighth grade. Schmidt said she plans to enroll her youngest in the testing program and talk about it first with her older daughter.

“I will do, at this point, really anything that will keep our kids in schools,” Schmidt said.

While she said her kids, especially her youngest, are thriving at school, she also has concerns. Her 10-year-old isn't old enough to be vaccinated, and her older daughter's school environment is more crowded than she’d like.

“Middle schools are certainly more crowded and there's more movement from class to class. So I think that's been something to give us a little bit more of a pause,” she said.

“You can't really test kids, or at least a non-vaccinated child, too many times in my opinion,” said Schmidt.

“I hope that other parents continue to think not just about their children, but the children that they share space with and others in the community,” Chase-Miller said.

To be tested, kids don't have to be showing symptoms. The district plans to prioritize grades K-5 because kids at that age still can't get the vaccine. After that, they'll move to middle and high school students.

The program is being done through collaboration with the Center for Disease Control and Prevention, Oregon Health Authority, Oregon Department of Education, OHSU, Multnomah County and health partners at the Multnomah Education Service District (MESD).

Testing is expected to start shortly after schools have completed registration.

PPS spokesperson Karen Werstein said while parents will be able to start signing consent forms and opting in this week, parents may choose to opt-in at any point while the program is underway.

RELATED: There's not much consistency in how Oregon school districts report data on COVID in schools 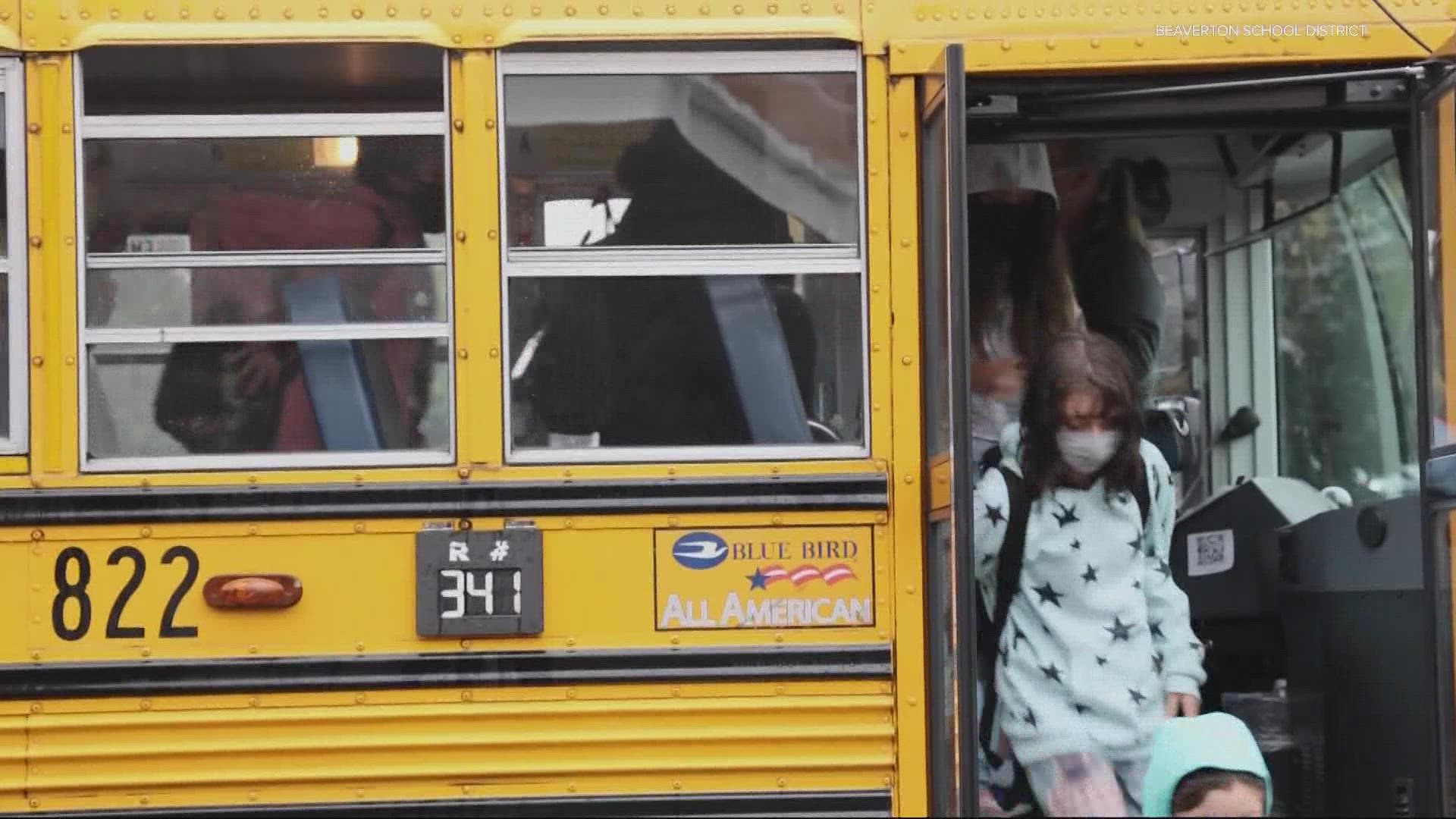