Kids have a place to engage in distance learning while also safely socializing with peers and doing science-related activities. 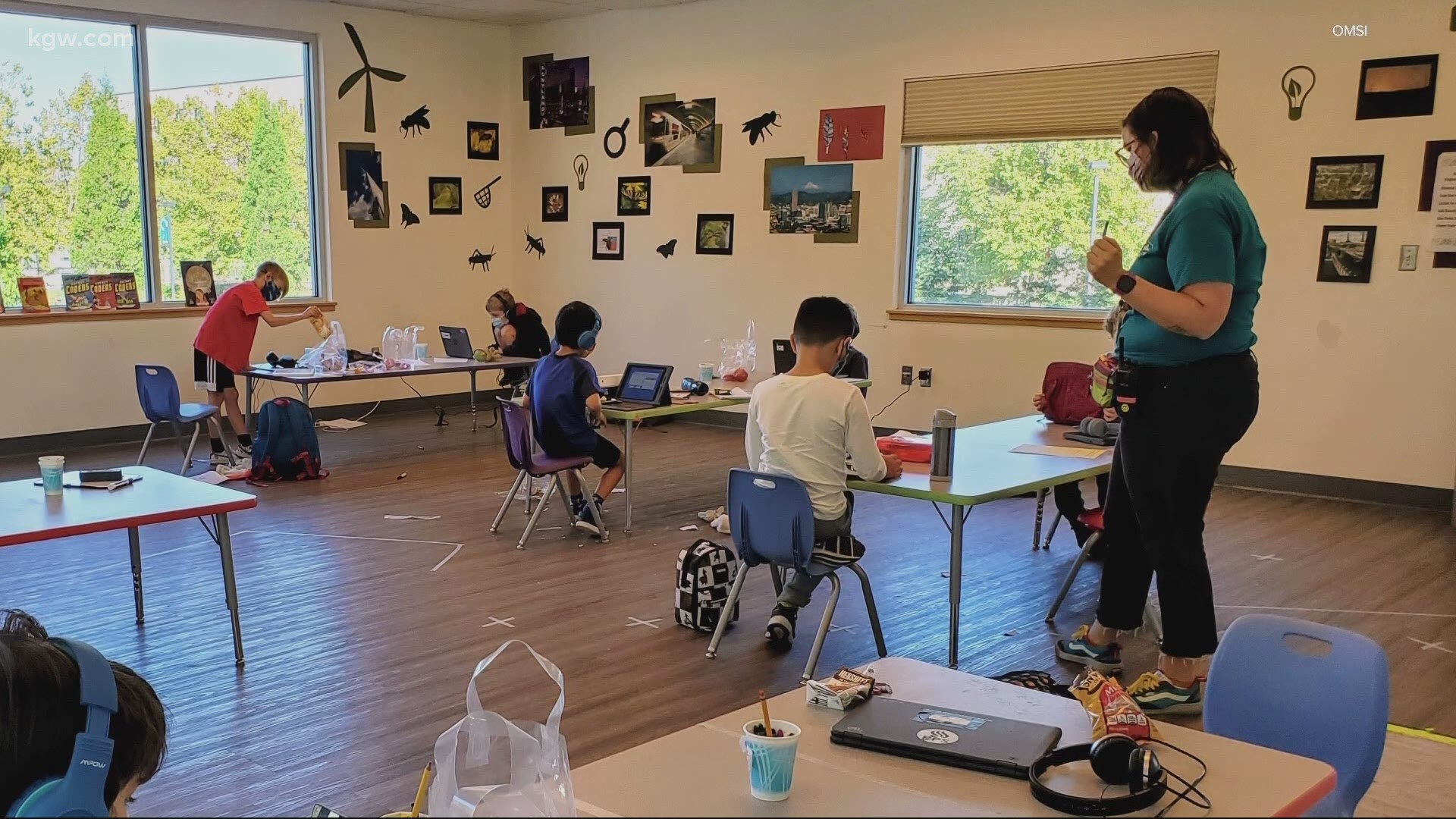 PORTLAND, Ore. — Distance learning has been tough on a lot of parents, especially those who have to juggle jobs and their children's educations.

But now there’s one more option that’s meant to help both kids and parents.

It’s called OMSI Homeroom. OMSI began doing emergency child care back at the beginning of the pandemic. OMSI staff decided to extend it into the school year, and this week is the start of the October session.

Shea Conley is one parent who has his child enrolled. He’s dad to two kids, 6-year-old Ary, who is starting first grade this year, and 2-year-old Cassius.

“The hardest part for us was keeping our 2-year-old at bay while [Ary] was learning. [Cassius] wants to be a part of it and say hi to the teacher and all the other kids on the screen,” said Conley.

Conley said it’s been a bit of a juggling act and a struggle. Both he and his wife work, though they are fortunate that they’re able to usually have one parent at home. Still, Conley said he’s also been worried about Ary’s lack of social interaction.

“We just really felt that our daughter was missing out on some important socialization that she would’ve gotten in school,” Conley said.

So, when he and his wife Jaime heard about OMSI’s Homeroom program, they jumped at the opportunity.

“Ary has really hit the ground running. She adores it,” said Conley.

Brian Berry, director of classes and statewide outreach at OMSI, said there have been zero COVID-19 infections since OMSI began its child care program.

During the last session in September, Berry said there were 90 kids broken up into groups of 10 that stayed in the same cohort throughout the duration of the session.

“They have an assigned OMSI instructor that helps them manage their school work.”

Here’s how it works: Parents drop their kids off, OMSI staff do health checks outside, and kids wear masks all day.

“The areas we’re currently in are completely separate from the rest of OMSI,” Berry said.

When asked about pricing, Berry said each month-long session is about $1,100. But thanks to donations and fundraising, OMSI is able to help families who need it.

“Right now over 70% of families are getting help,” said Berry. “I don’t want people to be worried about the price tag.”

Aside from required school work, kids that are involved also get to do fun science-related activities.

“I learned how to do origami,” said Ary as she showed off her origami crane.

She also learned how to make stuff called “oobleck.” We had to look it up.

“When you put pressure on it is a solid, but when you hold it like this, it’s a liquid,” Ary said with her hands outstretched.

“It’s so easy to make. You just need corn starch and water, mix them together, and oobleck.”

“It adds a small level of normalcy back into our daily routine,” said Conley.

OMSI Homeroom is every day from 8 a.m. to 4 p.m. for students in kindergarten through 8th grade.

Portland Public Schools is providing lunch, with help from the Oregon Department of Education.

Berry said spots for October are already filled, but there may still be openings for November.

You can visit the OMSI Homeroom website for more information.