One Portland high school student contacted KGW saying her school is crowded while a Ridgefield parent is worried about teacher vaccination. 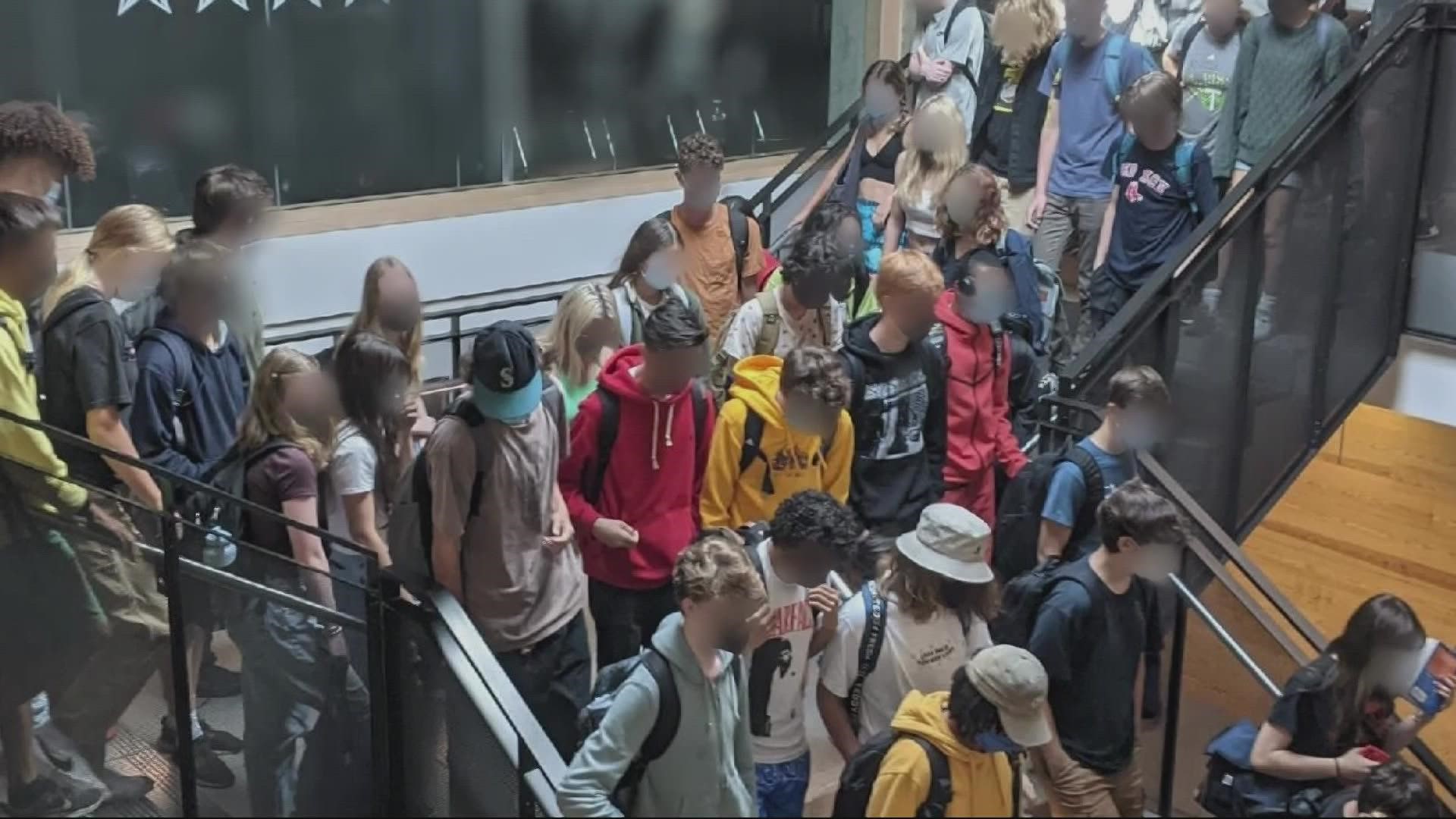 PORTLAND, Ore. — Many students in Oregon and Washington are starting their second full week of school. While some are excited about the opportunity, there are also many others who are worried.

She sent pictures taken during the passing period and at other points in the day. The photos show students crowded together. KGW has heard from others in the Portland Public School District who have similar crowding concerns. During the first week of school, a teacher sent KGW a photo of students crowded together in a hallway at Roosevelt High School. Michaud said in her classroom, students are sitting shoulder to shoulder.

“One thing that they claim that they [the district] would have this year is comprehensive contact tracing [...] but that's impossible in the way that they've set this up,” said Michaud.

She said Grant High School was built for 1,700 students but many more than that are enrolled. Portland Public Schools spokesperson, Karen Werstein confirmed that more than 2,100 students are enrolled at the school but said the building is able to accommodate more students due to the way various spaces are being used inside the building.

“My mother is severely asthmatic. If I take this home, it could put her in the hospital,” Michaud said.

Werstein has previously addressed crowded hallways, saying students typically dissipate quickly. She said in a statement, “According to the CDC, in a classroom setting, students who are between 3-6 feet from a student with COVID-19 for less than 15 minutes cumulatively in a day and are wearing masks would not be considered a close contact.” Werstein said PPS has prevention strategies that include using filters, testing, and asking students to self-screen before coming to school.

“It is imperative that all of us – adults, students, the community – take individual responsibility for our community. It will take all of us to keep us safe and healthy,” said Werstein. She also reiterated that in classrooms, students sit 3 feet apart where possible. According to state guidelines, 3 feet is measured nose-to-nose.

RELATED: What happens when students and staff are exposed to COVID-19 in Oregon?

“Unfortunately the guidance always says like 3 feet when possible, and so I think that gives schools, unfortunately, a lot of leeway to say, ‘Well we did the best we could when possible,'” said Natalie McCarstle.

She’s mom to three kids in the Ridgefield School District. She has very similar concerns to Michaud, but hers are more focused on teacher vaccination.

“My two older kids are vaccinated but my fifth grader is just 11 so he cannot be vaccinated.”

She’s uncomfortable with her child being in a room with a teacher who may be unvaccinated.

“So I emailed the teacher and just expressed my concern about the extremely high COVID numbers here in Clark County and explained to her that all last year we stayed remote out of concerns for COVID with our children and that because of this I needed to ask her if she was vaccinated,” McCartstle said.

Long story short, she didn’t get a clear answer. When she asked the principal, she said they told her they didn’t know the teacher’s vaccination status.

“As a parent, I find that really concerning for our community,” said McCarstle.

Then, when she tried to switch her son to another class with a teacher she knew to be vaccinated, she was denied even though the teacher said it’d be alright.

Since speaking to KGW, McCarstle said she’s been forced to withdraw her son from his school because her concerns weren’t addressed. McCarstle, who is also a teacher in a different school district, said she was able to transfer her son to her district where her request could be accommodated.

Joe Vajgrt, spokesperson for the Ridgefield School District, said while they can sympathize with McCarstle, they’re unable to disclose medical information. That sensitive information is only available to a small team. Vajgrt said if parents are allowed to move their children to another teacher they know is vaccinated, that would make apparent the identities of teachers who are unvaccinated. He said there’s very little that can be done to protect privacy while also addressing individual concerns.

Back in Portland, Michaud hopes her COVID-related concerns are addressed. She plans to write up a petition.

She said it would help if the district hired more teachers and invested in other spaces, like portables, to further space students out.

Michaud is worried about the outcome if there isn’t more distance between students.

“This will end in tragedy if we do not fix it.”