Continuing efforts to bridge the digital divide among Portland students

In Multnomah County, before the pandemic, at least 65,000 families didn’t have an internet connection in their homes. That number is expected to have grown. 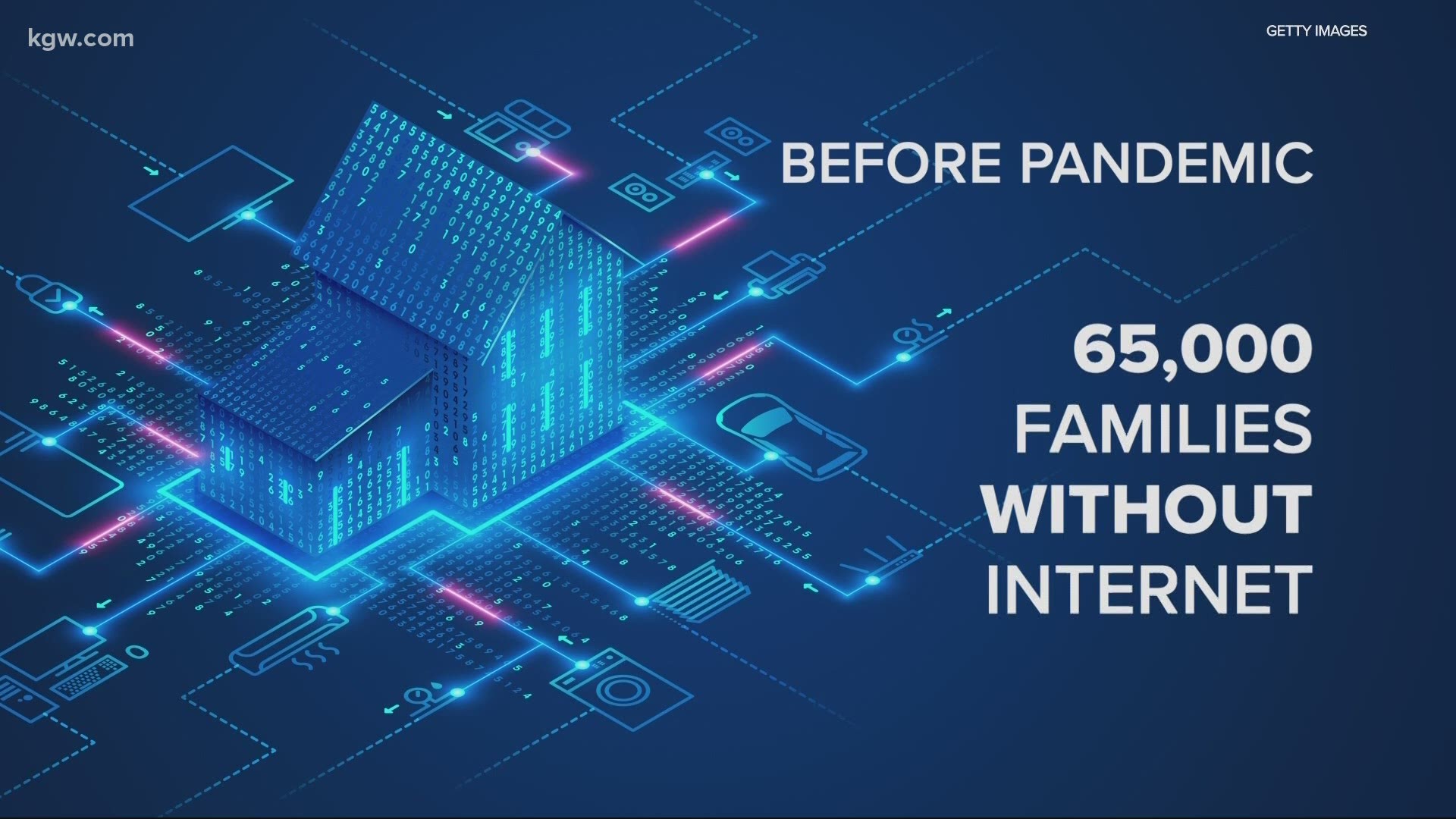 PORTLAND, Ore. — Students have been distance learning for a while now. While many kids in some of Oregon's larger school districts are squared away with devices, one area that’s still a challenge is connectivity.

For those who have access to internet and devices, it may be easy to forget about the many people who do not. But there are efforts underway to help bridge the digital divide.

Rebecca Gibbons, the broadband and digital inclusion manager for the City of Portland, said before he pandemic, at least 65,000 families didn’t have internet connection in their homes. Because of the hardships associated with the pandemic, that number is expected to have grown.

Machelle Hamilton is a single, working mom, with five kids. Four are distance learning. She said she typically works overnight shifts then comes home, immediately cooks breakfast for the kids and logs them into their virtual classrooms.

“I go from room to room. From about 9 o’clock to noon is the busiest time,” said Hamilton.

She is one of the many people who have received help from programs like the Community Healing Initiative, also known as CHI. CHI is made up of a number of community organizations.

“The device I’m on now, I got from CHI,” Hamilton said over a Zoom video call.

Hamilton has also received help in the form of internet gift cards. During the pandemic, the CHI program was able to distribute dozens of laptops and devices to people who needed them thanks to a partnership with the City of Portland. The city has also partnered with many other community organizations both to think up long-term solutions to address the digital divide as well as to help families with connectivity needs during the pandemic.

“If you don’t have quality internet, that creates a second obstacle,” said Justice Rajee, a program manager at POIC + Rosemary Anderson High School. His organization is involved with the CHI program.

“One of the biggest challenges and most of the reasons we find families in difficult situations is because of how they’re isolated or disconnected from opportunities,” said Rajee.

He said those opportunities, like online job applications, are dependent on access to devices and the internet.

RELATED: Pressure builds on schools to reopen during pandemic

One of the internet options out there is Comcast’s Internet Essentials program for low-income families. Amy Keiter, spokesperson for Comcast, said thousands of families have signed up during the pandemic.

Gibbons acknowledged that Comcast has been responsive to families' needs in the pandemic, but there have been concerns throughout the pandemic about the internet speed and its ability to handle video chats.

“We’ve had reports from families who have four or five kids needing to get on at the same time and the speeds of an Internet Essentials connection just isn’t enough,” said Gibbons.

To address that complaint, Comcast announced on Tuesday it will be increasing internet speeds for families in the Internet Essentials program.

Keiter said speeds would double, from 25 mbps to 50 mpbs.

In recent weeks, Comcast also announced a partnership with the Boys and Girls Club to offer "Lift Zones." Lift Zones are spots where kids at clubs in Oregon and Southwest Washington can access the internet and do school work.

“Comcast increasing the speed is going to make a much better experience, particularly for families that have multiple children,” said Langford.

Like Gibbons, he had also heard concerns from families with more than one child who had to use the internet in order to attend class and participate.

Langford said the Beaverton School District has continued to work to address connectivity issues while students have been distance learning. In the beginning of the pandemic, the district gave out 1,000 codes that would give families free access to the Internet Essentials program through June 30. He said the district has had numerous community partners. T-Mobile has given hotspots to families in need and Sprint has also stepped in to help. The district has also established a help desk line in multiple languages to address any internet or device issues.

While efforts to bridge the digital divide are helping, both Gibbons and Rajee say it’s a drop in the bucket compared to what’s needed.

“We have a long way to go to really closing the gap to how people are connecting in our society and our community,” said Rajee.

He said getting devices to families as well as getting them connected to the internet are of equal importance and equal need.

“We still have a lot of area for growth to make sure people get training and get repetition and access to even more,” he said.

RELATED: What you need to know about COVID-19 vaccines in Oregon Tuesday