The new Black Lives Matter flag stands on a hill next to a Progress Pride flag within view of Newberg High School. 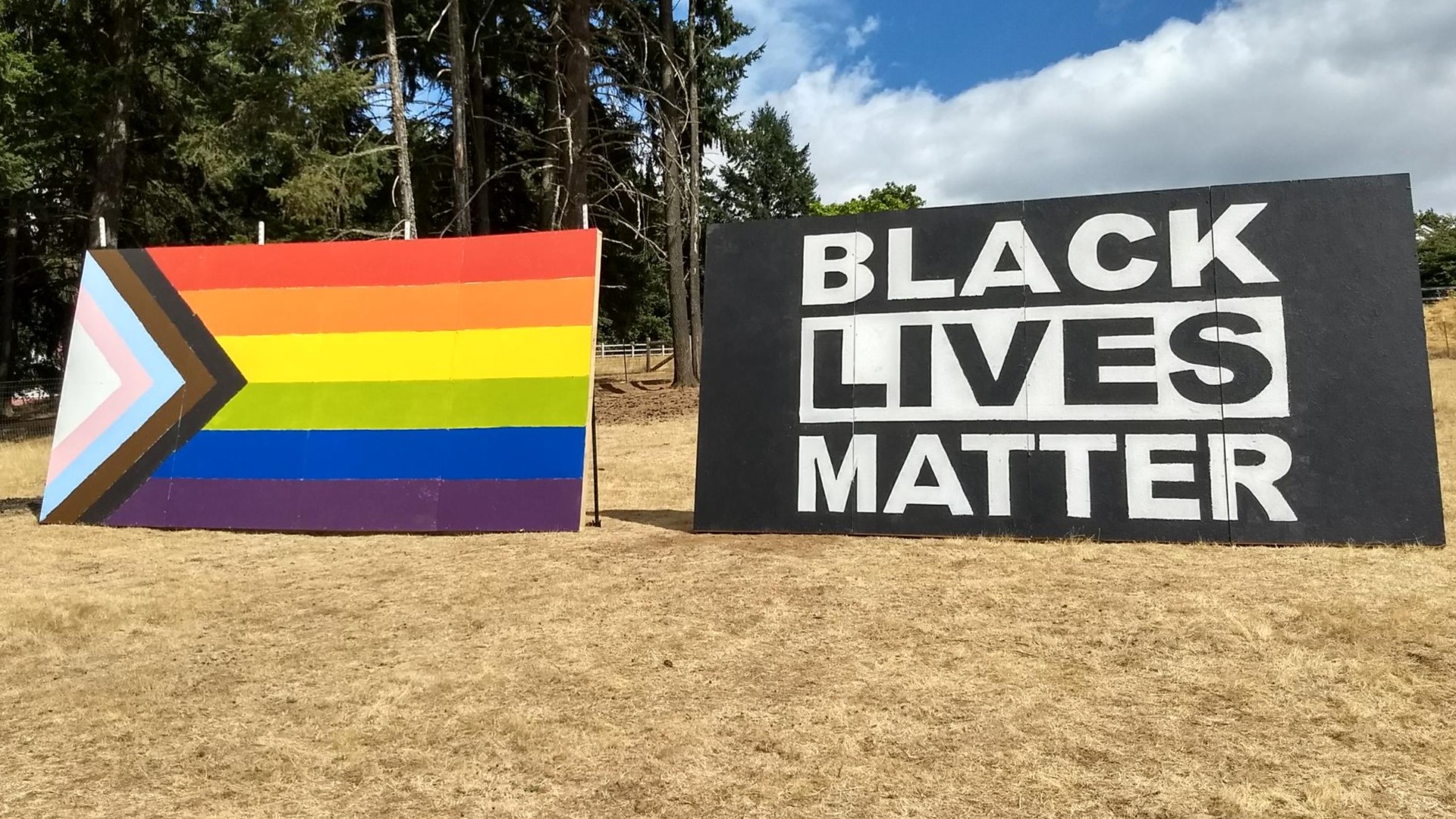 NEWBERG, Ore. — A Black Lives Matter flag is now part of a display in Newberg, protesting a school board vote to ban "political" symbols.

About 20 people came together Thursday to paint and construct the 17x30-foot plywood flag. It now stands on a hill next to a Progress Pride flag on Erin and Jaybill McCarthy's farm, within view of Newberg High School.

On Aug. 10, the school board voted 4-3 to ban so-called political and "divisive" symbols. Members in favor of the ban argued Pride and BLM fall within that category.

However, advocates argue this is discrimination, since race, sexual orientation and gender identity are neither choices nor political.

Miller emphasized the phrase "Black Lives Matter" is not the same as the political organization of the same name.

"When we say Black Lives Matter on the street, we're really referring to our lives as Black people matter," Miller said. "Our life isn't political. The only divisiveness is white supremacy."

"When members of a marginalized population ask for help, you say yes," Erin McCarthy said. "I'm not trying to convince anybody of anything. I'm trying to show love and support to members of these communities. If it makes you angry, it's not for you, so don't look at it."

The school district superintendent said lawyers must review the ban before it can be enforced.

The ACLU of Oregon has already threatened legal action if the ban moves forward.

The school board may face other legal trouble, according to reporting by Ryan Clarke of the Newberg Graphic. Clarke found four board members may have violated state law during a closed-door meeting when they voted to hire an outside lawyer.

BREAKING: Newberg School Board director Brian Shannon just broke public meeting laws to make a motion to hire a new attorney for the Newberg School District. Moments before the board enters executive session (not open to the public) to hear from its actual attorneys.

The ban and resulting uproar have resulted in national news coverage and a peaceful protest in downtown Newberg on Aug. 24.

The rally at the Unity Flag drew hundreds of people from around Oregon advocating for BIPOC and LGBTQ youth:

Hundreds are protesting a Newberg School Board ban of “political” symbols, which members said includes Pride and Black Lives Matter flags. These advocates are pushing back.

Multiple studies by the Trevor Project and JAMA Pediatrics show both BIPOC and LGBTQ youth are at significantly higher risk of suicide because of bullying and lack of support.

"[These flags show] that they're worthy of being alive," said Kelly Lash, a licensed professional counselor at the protest. "Literally saves lives."