District officials hope the week will be a launching-off point for more mental health efforts throughout the year. 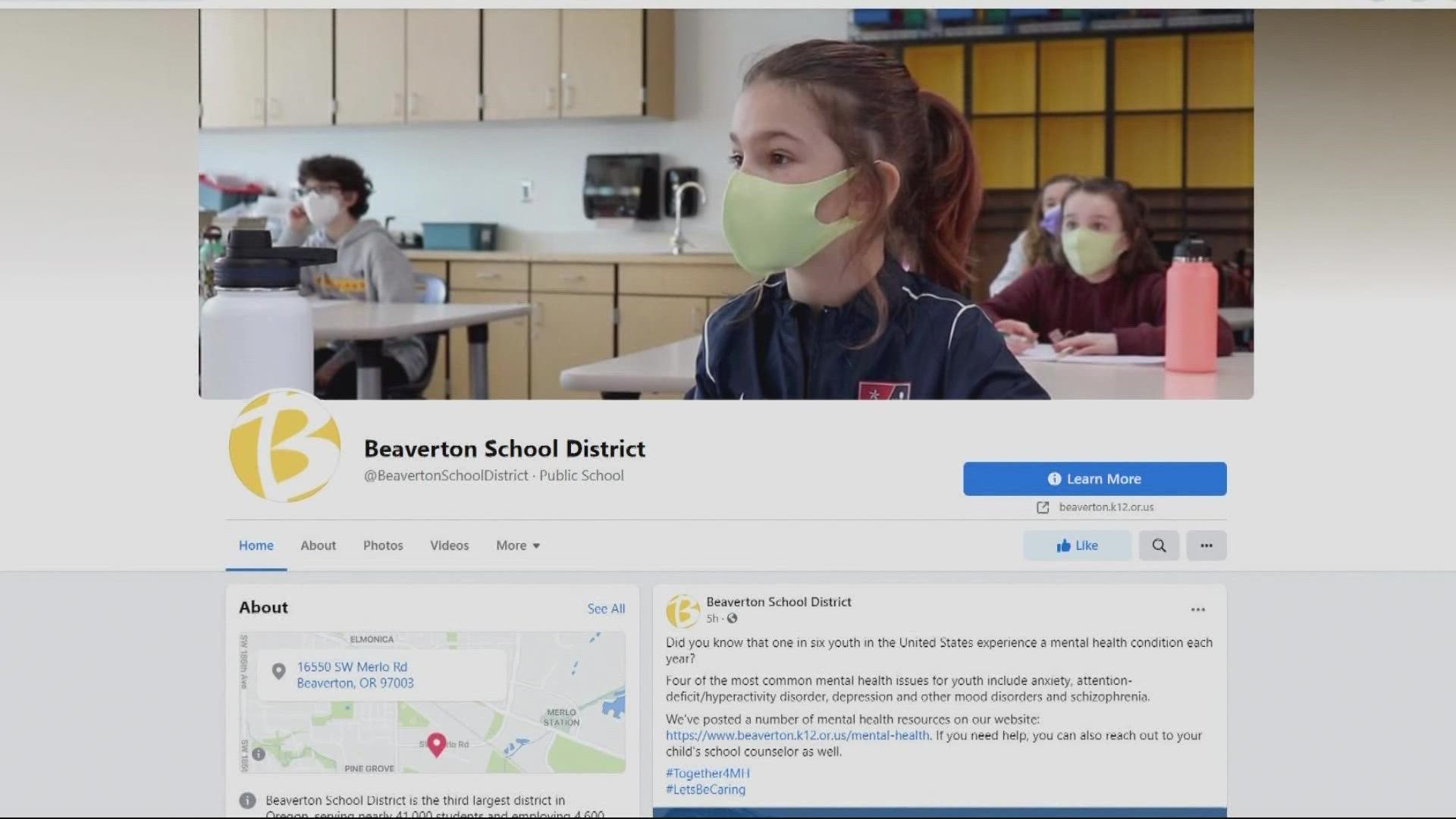 BEAVERTON, Ore. — As students endure another year of school during a pandemic, the Beaverton School District is taking steps to make sure it is helping take care of students’ mental health.

This week, the Beaverton School District is focusing on mental health and hoping it’ll be a launching off point for efforts throughout the year.

“We have a really targeted social media messaging campaign talking about recognizing signs of mental distress, where to get help,” said Leslie Rodgers, the safety and wellness specialist for the Beaverton School District. Rodgers oversees threat assessment, suicide prevention and other crisis services for students.

She said the goal for the month of October is for every student to hear about where they can go for help. The district plans to have suicide prevention lessons throughout the year.

“It's the first time that we've really marketed to the entire district and tried to really raise the awareness on a district level rather than on an individual school level,” Rodgers said.

From her observations, kids and adults seem to be struggling more than previous years where school was in person. Rodgers said it could be the pandemic, the stress associated with a sudden return to an in-person environment, or a combination of both.

“Now that that kids have returned to school we're hearing so much about just overwhelm […] anxiety, and much of that is inducing some depression and just general struggling among our students,” she said.

That anxiety can push students to the breaking point.

“Our number of suicide screenings that […] I've received based on kids that have reported suicidal thoughts is much higher than it has been in previous years when we've been in-person,” said Rodgers.

A piece of advice

She said it’s imperative that parents ask questions and not shy away from talking about the tough stuff.

“If I could give one piece of advice to every parent, it’s to not be afraid to talk about suicide with your young people,” said Rodgers.

“There's no evidence that suggests that talking openly about suicide plants an idea in a child's head. In fact, the opposite is true. Talking clearly and directly about suicide decreases risk. So I really want to empower parents to be able to ask the question: ‘Are you thinking about suicide?'"

On Thursday, Oct. 7, the district has partnered with Washington County to host a virtual event to talk to Beaverton parents and caregivers about mental health and suicide prevention.

“We’re holding a parent/guardian training even called, ‘Question, Persuade, and Refer,’ which is evidence-based curriculum for suicide prevention really with the goal of, how do we equip parents to recognize the signs, to know the warning signs, to know the risk factors of suicide, and then know how to interact and intervene,” said Rodgers.

There is a cap on attendance, largely because sensitive topics will be discussed, but there’s still space. Registration information is on the district’s Facebook page.

Rodgers said counselors and social workers will be in attendance to answer questions.

Rodgers said this is the first parent training event being offered, but the district hopes to put on more quarterly training events and add on events in other languages.