The idea is to help students problem solve questions they have about their school work. 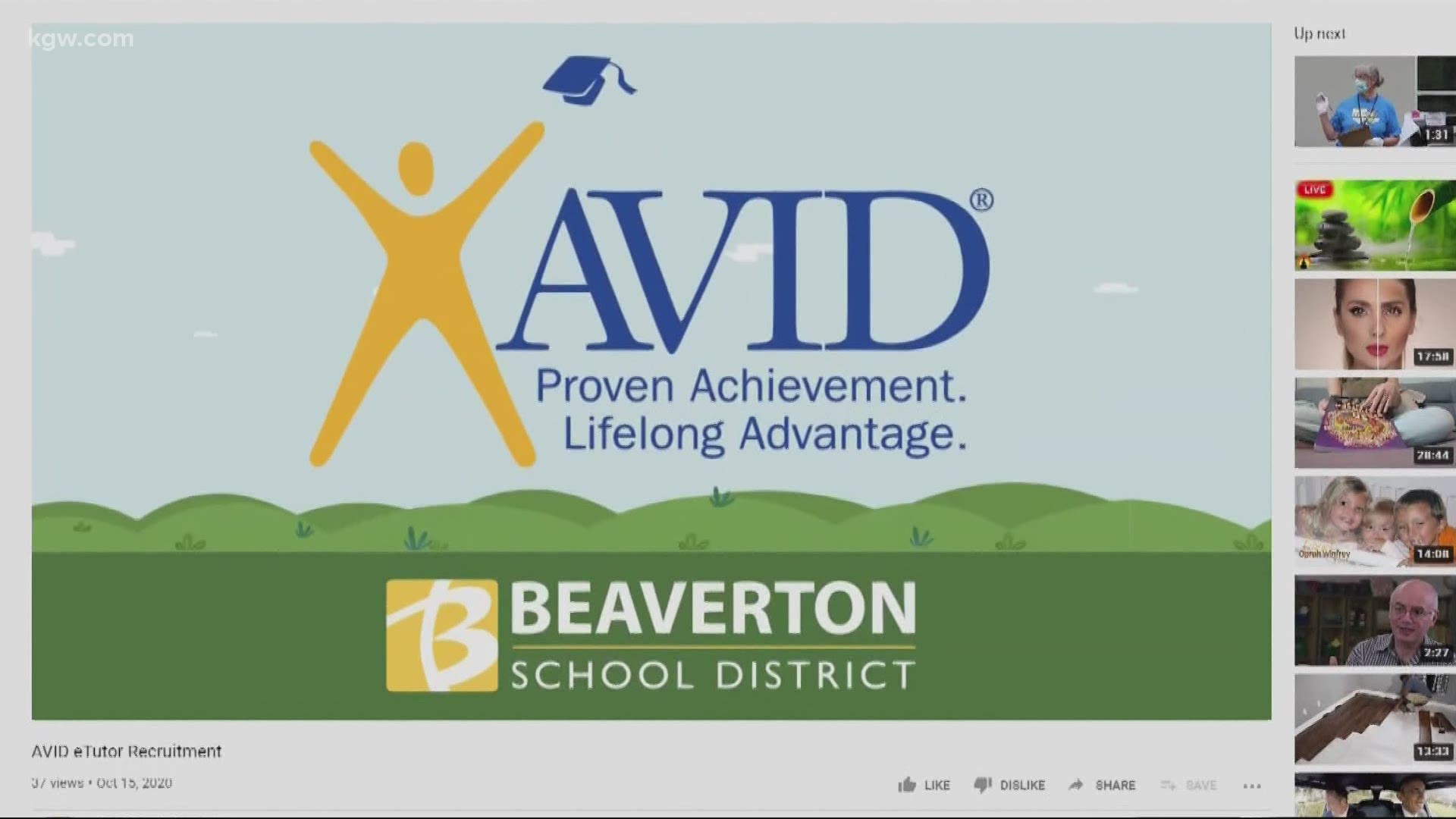 BEAVERTON, Ore. — A program in the Beaverton School District is helping kids get to college and this year in particular, there’s a big need for volunteers.

Jacob Hernandez, a student involved with the AVID program, said it has been beneficial for him.

“I know that's [college] where I'm headed to. That's where I want to go,” said Hernandez, a junior at Aloha High School.

“[I] want to go to college [to] have a good stable job and want the experience," he said. "And all my family members, they want me to go because they couldn't and I have cousins that want to, but they can't because work and stuff. They just can't."

So he decided to do AVID, a middle school and high school program in the Beaverton School District.

“So AVID is a system […] that helps with college and career readiness,” said Jamie Cooper, an AVID teacher at Five Oaks Middle School.

She said students often take advanced classes and are committed to putting in the work to achieve their goal of going to college. They all go through an application process in order to get into the program, where they get more support and coaching for college.

She said students are assigned extra reading and writing to help them on the path to college.

“They don’t believe they can do it, when they can," Cooper said. "We’re really helping kids. We’re giving them access to those advanced classes and giving them tools, little hacks, that will help them access that material.”

This year, it will all be virtual. Students typically work in small groups to answer questions about schoolwork. There's also a tutor who is a volunteer from the community who helps the students problem solve. While they’re labeled as a tutor, Cooper said it’s not what some people think.

“They think they have to be experts in the content and they don't,” she said.

According to Cooper, volunteers will be given online training before they begin working with their small group of students.

John Ratliff is a retiree and an AVID tutor. He first became a tutor in 2014. He said back when he was in college, he wasn't prepared.

“In the 1960s, there was no real preparation for college. So, college was hard for me,” said Ratliff.

Soon after starting college, he was drafted for the U.S. Air Force. After serving for about four and a half years, he went back and completed his degree. Now, he wants to help the younger generation achieve their goals.

“We have some really good kids coming up,” said Ratliff. “They are some of the smartest, brightest kids I know, and we need to give them a chance.”

Ratliff also said volunteering in this way gives him a chance to increase awareness of the field he worked in before retiring, industrial hygiene. He said it’s all about the applied science of health in the workplace.

“A lot of us that know about it are retiring,” laughed Ratliff.

But mainly Ratliff enjoys helping the students and sharing his life knowledge. An added bonus, he said, is he gets a lot out of interacting with kids as well.

“Just interaction with the next generation, you start experiencing things that you wouldn’t experience," he explained.

His piece of advice to students: don’t give up.

“If you’ve got dreams, pursue them. If you come to roadblocks, go around them, or go through them, or find some other means to get to your dream. But get there,” said Ratliff.

It’s clear he and other tutors inspire confidence.

“It feels really good having tutors come in,” said Hernandez. “I know I can do it.”

Cooper said with everything going virtual this year, they'll need two tutors in each virtual classroom. So, more community volunteers are needed. She said normally she’d be in the classroom with various groups of students, each with their own tutor. But that can’t happen this year.

Anyone from college students to retirees can apply to be a tutor. The information is on the Beaverton School District website.