A look at COVID-19 safety measures inside one Portland school

As Portland Public Schools moves closer to limited in-person instruction, a lot of people are wondering what it'll look like and how safe it’ll be. 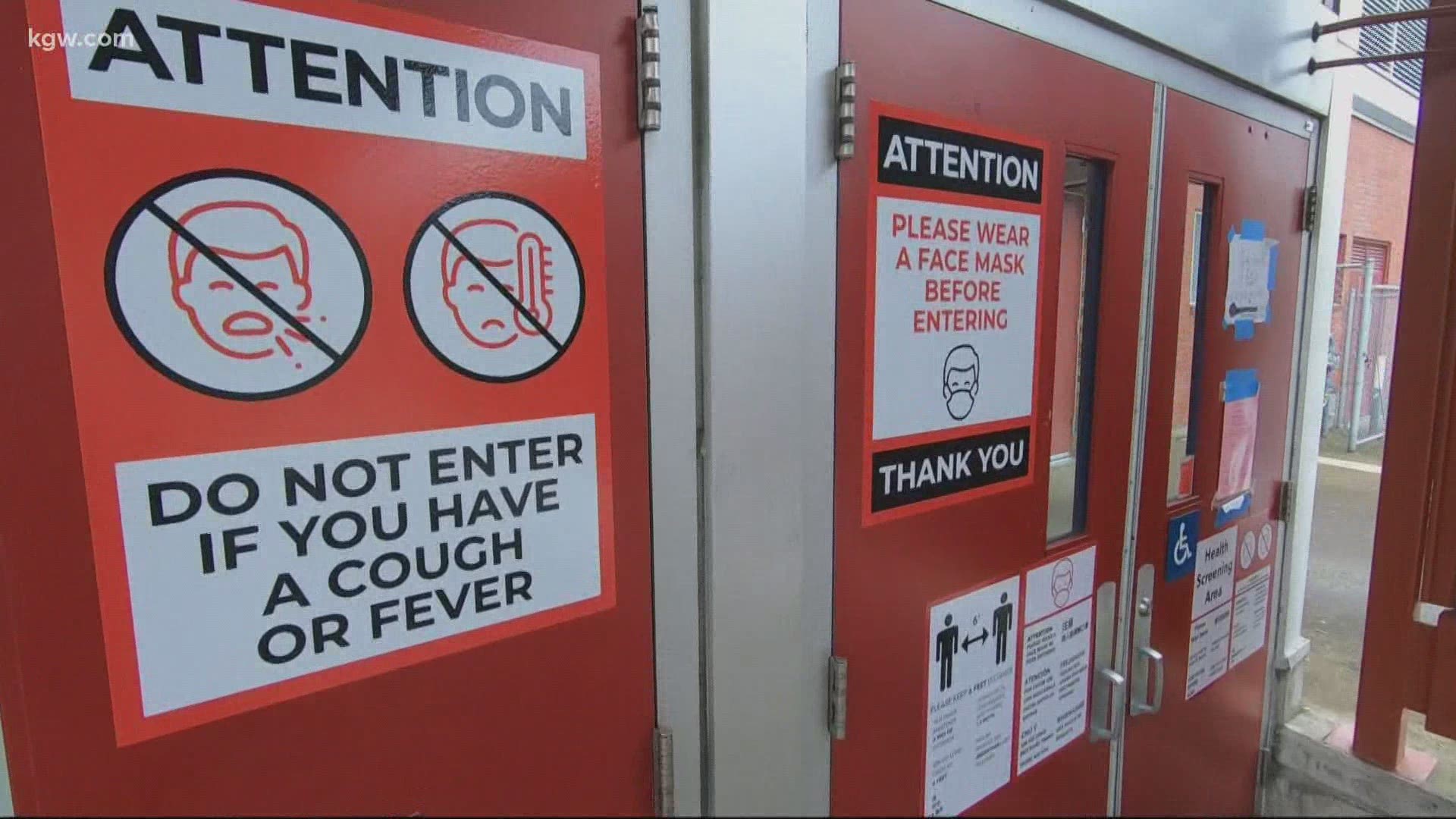 PORTLAND, Ore. — Portland Public Schools (PPS), the largest district in the state of Oregon, is getting ready to start limited in-person instruction at more than a dozen schools.

Initially the plan was to start on Monday, January 25.

Now, the district says the majority of those schools will start limited in-person learning the week after, for students who need the most help in reading, math, as well as social and emotional needs for the youngest kids.

We got a chance to go inside Harriett Tubman Middle School in North Portland to look at the safety precautions in place.

On the front doors, bright signs are visible, telling people not to come in if they’re sick and to wear masks.

Just outside the main entrance, dots are painted on the ground to make sure kids are able to stay socially distant if they’re waiting outside.

Once through the front door, the first thing you see is hand sanitizer.

If you’re a guest or a parent, you’ve got to grab a clean pen and sign in.

Walking through the school, there are signs all over reminding students and staff to keep six feet away from each other and wash their hands.

Throughout all the hallways, there are markings on the ground telling kids which direction they need to walk.

Both inside and outside the main office, there are markings on the floor telling people where to stand.

Staff at the front desk, are protected by plexiglass barriers.

Inside classrooms, desks are spaced six feet apart and each student has 35 square feet of space around them, a requirement from the Oregon Department of Education.

Dr. Shawn Bird, chief of schools for PPS, said each classroom can fit up to 20 kids maximum but because of classroom sizes, it’ll probably be more like 13-15 kids.

He pointed to a sign outside one of the classrooms with the number 14 written on it.

“They’re marked with a capacity, so this is to make sure we have physical distancing in place. So, this classroom can hold 14 people,” said Bird.

“The custodians will then, after the teacher leaves, go and clean the room on a daily basis,” he said.

Bird said students will be in class about two hours per day on top of distance learning.

There will also be reminders to stay safe over the intercom throughout the day.

In addition, there are several rooms called “symptom spaces.” These are areas where symptomatic kids and adults can go.

“We’ll have stand-alone air purifiers as an added measure of safety in those rooms and we’re running our HVAC systems for longer during the day,” Bird said.

“We have an industrial hygienist that we consult with that is looking at all of our spaces.”

If you’re wondering about kids coming at the same time, each school building will have multiple entrances.

“It won’t be a full-scale reopening right away, but we do hope that as vaccines are administered, then we can welcome more and more students back over time,” said Bird.

As for bus safety, district spokesperson Karen Werstein said drivers will visually scan students. If they appear symptomatic, they will have to sit in a special section of the bus if parents are not present to take the child back home. There will be six feet of space between the bus driver and students. Werstein said in accordance with ODE guidance, students will sit three feet apart on the bus.

The district initially said 16 elementary schools along with a handful of middle and high schools would begin limited in-person instruction around January 25. Now it’s expected nearly all of them, except one high school, will begin the week after.

Here is a list of schools the district is expecting to participate in the initial phase of limited in-person instruction:

The district is still in the process of determining which middle schools will participate.