Ethelyn Tumalad's students say she promotes community in her classroom and encourages students to be true to who they are. 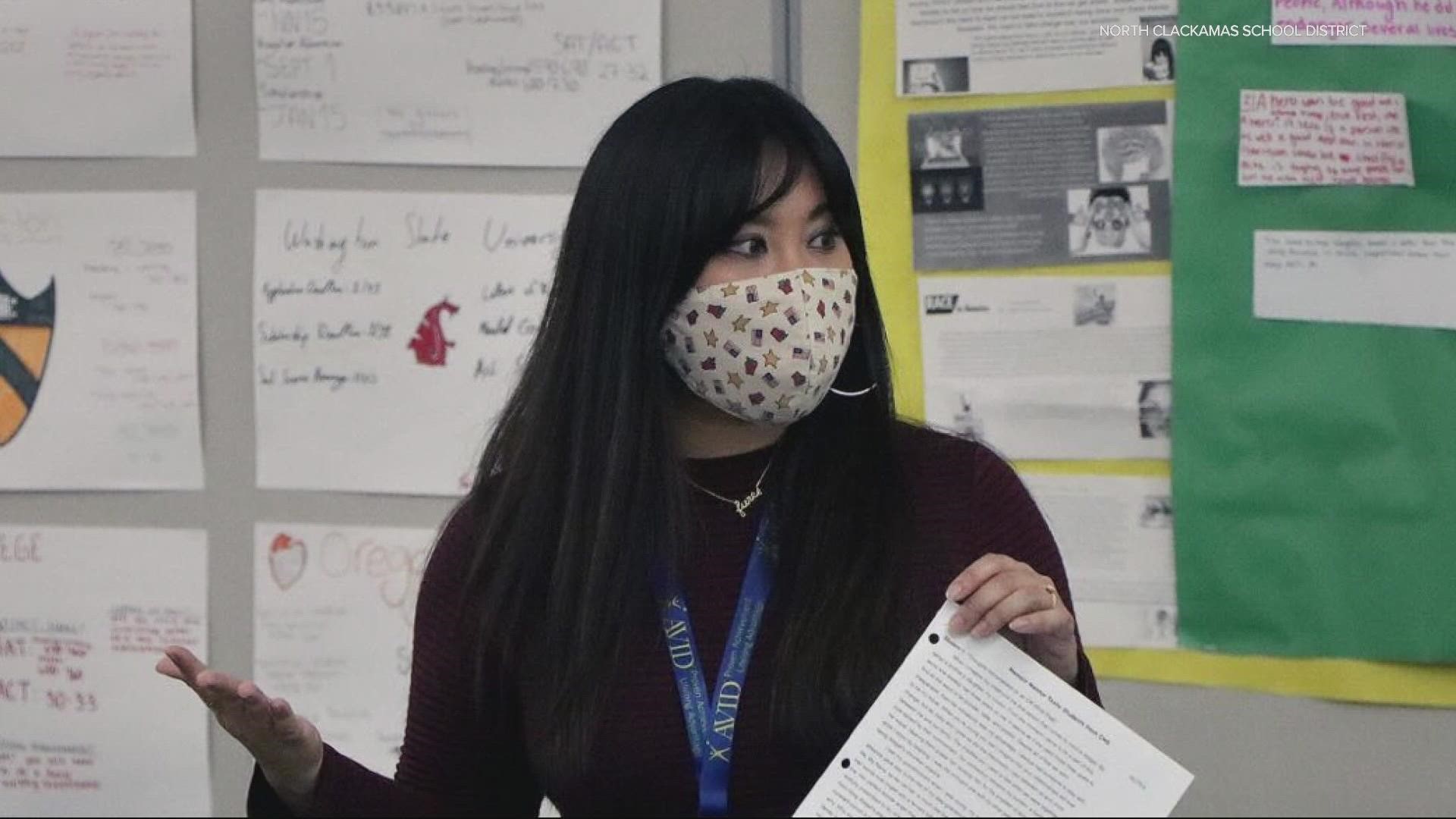 CLACKAMAS, Ore. — Many of us remember at least one teacher who has made an impact on our lives.

Every year, out of the many who do amazing work, one is honored as Oregon Teacher of the Year.

Ethelyn Tumalad, an English teacher at Clackamas High School, found out last week that she had been awarded with the title. She was surprised with the news at a staff meeting. She said school officials, along with her fiancé, had known for a month.

“It was supposed to be another usual meeting in the morning,” said Tumalad.

She said her fiancé had her family from Washington show up in order to see the announcement in person.

“Let me tell you, I’m still in shock. It still feels surreal.”

Her students will tell you the recognition is well deserved.

KJ Johnson-Gibson, a senior at Clackamas High School, said he knew Tumalad would win the award.

“I told you so. She didn’t believe that she was going to win the Teacher of the Year award,” said KJ.

“I think everyone around here knows Tumalad and just wants to be in her class,” said Payton Mix, who is a senior at Clackamas High as well.

“Her classroom, like the first time I walked in, it was really built on community,” Nalani said.

Trinity Porotesano, a junior at Clackamas High School, does not have Tumalad as a teacher. But Trinity heads up the Asian Pacific Islander Student Union, where Tumalad is an advisor. She’s also involved in student government.

“This last year has been very difficult for me […] Ms. Tumalad made me feel seen and appreciated,” said Trinity.

In addition, Trinity said while she didn’t personally know Tumalad when she first came to the high school, just seeing Tumalad in the hall, gave her a sense of comfort.

“It was just so nice to see a woman of color,” Trinity said.

“Without Ms. Tumalad's encouragement, I would have never found the confidence to run for these [student leadership] positions,” she added.

That inspiration is similar to Tumalad's experience growing up. She remembers her 8th grade English and Social Studies teacher, a Japanese-American woman, who believed in her.

“When a woman who looked like me, told me, ‘You can do something, you should try this.' Yeah, it propelled me in a path,” said Tumalad.

That path has led Tumalad to teaching English as well as a program called AVID (Advancement Via Individual Determination), which is a college prep course for students who often have parents who did not go to college or students who face other challenges. Tumalad sees a lot of herself in her students being a first generation, Filipino immigrant who came to the U.S. at five years old. She was also the first to go to college.

“The first to have to navigate so many things that I know my students are doing, it's really powerful, that connection,” Tumalad said.

Her students are grateful to have her in their lives.

“She gets us to be determined and eager to get our work done and like exceed our goals and plan for the future,” said KJ.

But it’s not just her students who benefit from the relationship. When they found out Tumalad was in the running for Oregon Teacher of the Year, KJ struck an emotional chord with Tumalad when he told her he wished she would believe in herself and have more confidence.

“I remember thinking like, that is what I give my students. I tell them this is something that’s in you. I believe in you. How come I’m not getting that in myself and it’s almost a little bit of a mirror, like a reflection,” said Tumalad.

KJ added that he thinks Tumalad brings out who they really are. Helping her students be authentic and true to who they are is important to Tumalad.

“You don't realize as a teacher what you really are doing just by being yourself. That's what I want kids to do is have a space to be themselves, have a community in my classroom,” she said. “At the end of the day, it’s always about the students for me.”

“Everything about [Tumalad] is just awesome and great. I just love her,” said Nalani.

Tumalad, who has only been teaching for five years, said her two favorite moments on the day she heard she had won the award were having her family show up and holding her mom’s hand as the news was announced, then all of her students filing into the room.

“[What] my mom and my dad have gone through to come to this country and for me to hold her hand while this is being announced is life changing,” said Tumalad.

Tumalad, as well as Clackamas High School, were both awarded $5,000. Tumalad will also get year-long professional development.

If you've got a teacher you want to recognize, you can nominate them for next year's award at www.oregonteacheroftheyear.org.