Just how slow was Salem to Portland drive following the eclipse?

Just how slow was traffic out of Salem after Monday's eclipse? 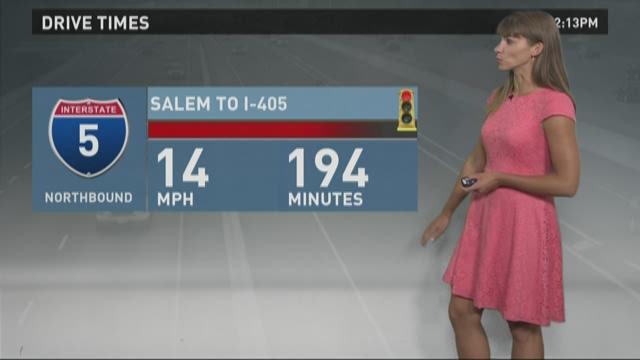 Just how slow was traffic out of Salem after Monday’s eclipse?

A graphic released Wednesday by the Oregon Department of Transportation shows speeds on northbound Interstate 5 falling from above 60 mph to below 20 mph between Salem and Woodburn immediately following the event.

Recorded traffic speeds between Salem Parkway and Woodburn on NB I-5 the day of the eclipse (Aug. 21) versus a regular day.

Speeds on that stretch of the freeway didn’t return to normal until after 7 p.m.

Traffic was even slower between Woodburn and Wilsonville. By noon, drivers were stuck going 10 miles per hour or less, and speeds didn’t return to normal until 8 p.m.

Recorded traffic speeds between Woodburn and Wilsonville on NB I-5 the day of the eclipse (Aug. 21) versus a regular day.

“The speeds just plummeted right after the eclipse as folks dashed out of the Salem area and clogged up I-5 heading north,” ODOT spokesman Lou Torres said. “It was pretty much just stop and go for most of the afternoon and early evening all the way into the Portland Metro area.”

Viewers reported to KGW the drive took them between five and six hours immediately following the eclipse.