For the first time in 99 years, North America is going to experience a coast-to-coast total solar eclipse. 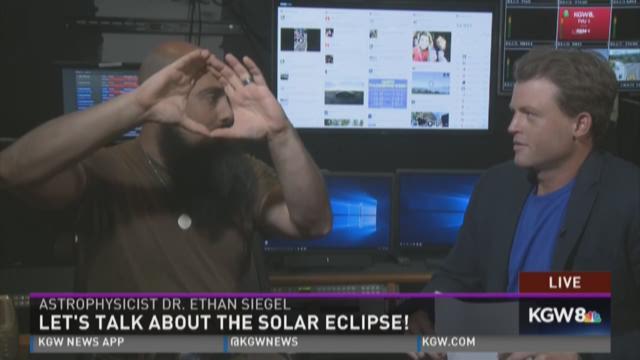 For the first time in 99 years, North America is going to experience a coast-to-coast total solar eclipse.

Theoretical astrophysicist Dr. Ethan Siegel came into the KGW-TV Facebook studio to share his knowledge. And there a lot more to it than the moon blocking the sun.

The temperature is going to drop by maybe 15 or 20 degrees. So If it's 70 before the eclipse starts, it's going to be, like, 55. It's going to get dark for just a couple of minutes, But it's going to get cold for a while. When the sun's disc is 70, 80, 90 percent blocked, it's still going be really bright but the heat won't be there. So you'll feel it on your skin. You're used to the sun warming you, so it'll be bright but you won't feel the warmth from it.

2. You could do some serious damage to your eyes, in seconds

It only takes about 60 to 90 seconds of looking at the sun to do permanent damage to your retina. And that's not consecutive. You can burn a whole in your retina.

Dr. Siegel recommends getting eclipse glasses, which typically come cheap and are available online or even free at some libraries. Travel Oregon is including free eclipse viewing glasses with the 2017-18 Travel Oregon Visitor Guide. Make sure your glasses are ISO certified. They should have a silvered appearance on the outside.

You should see absolutely nothing, unless you look at the sun.

Dr. Siegel says a welder's hood or welder's goggles should also work, but be sure to get shade 14 or higher. Binocular and telescope users will need a solar filter.

Put the filter over the outside lens, not the lens that's going right up next to your eye, because if the light gets focused it will burn a hole through the paper and then through your eye.

3. You will see stars

The eclipse of the sun won't be the only treat you'll see on August 21st. Stars will also be visible.

It should get dark enough, especially if you're in the center line. You should be able to see very close to the sun. There'll be a pin prick of light. That's a bright star, Regulus. It's one of the brightest stars in the sky and it just happens to be a little over one degree away from the sun. Those stars and how their light is bent, is how we first confirmed Einstein's relativity during a total solar eclipse back in 1919. So 98 years later, you can experience that for yourself.

4. You can see Mars and Mercury

In addition to seeing the eclipse and seeing stars in the middle of the morning, you'll get a glimpse of Mars and Mercury.

5. The shadows will look weird

If you see an eclipse coming and it's getting close to totality, you'll notice that shadows start to look weird. You take your hand like this and you make a grid, and you stand with your back to the sun, and hold your hands up like that. You look at the shadows that they cast, you'll actually see little shadows of the sun, the eclipse sun on the ground.

Let's talk about the eclipse!

Theoretical astrophysicist Dr. Ethan Siegel spoke with us about the total solar eclipse on August 21, and the best places for Oregonians to watch! Starts With A Bang