Riot declared, 1 arrested in Tigard after vandalism in response to fatal police shooting

Photos from the scene showed windows broken out and graffiti at the Tigard police station and at businesses in Tigard. 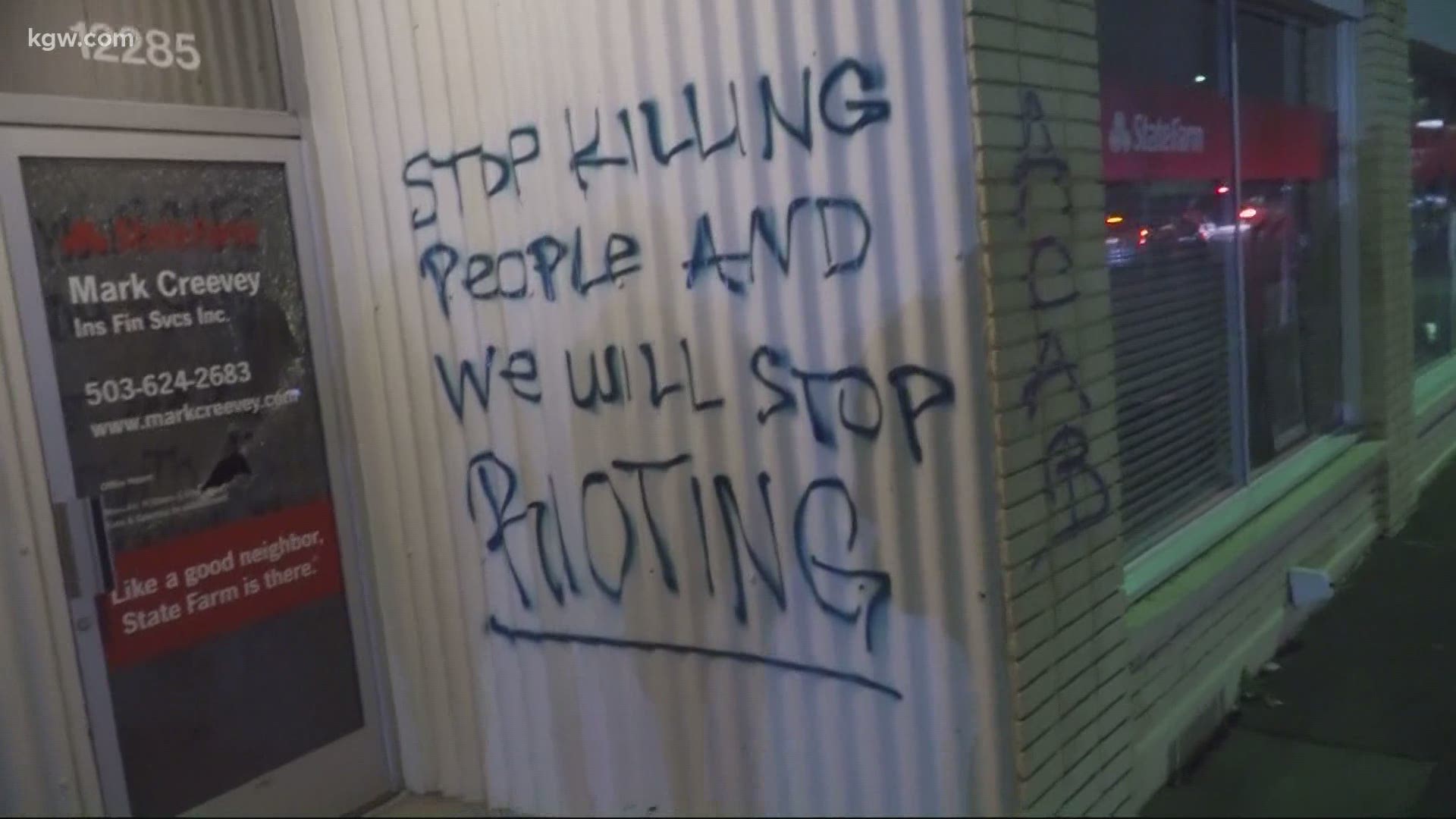 TIGARD, Ore. — Police declared a riot and arrested one person in Tigard Thursday night, following demonstrations in response to a fatal shooting by a Tigard police officer Wednesday.

Tigard police said about 100 people marched to the Tigard Police Department at around 8:30 p.m. During the march, some in the group vandalized several businesses, breaking windows and tagging both public and private property with graffiti, police said. Once the group arrived at the police station at around 8:45 p.m., members of the group broke windows and tagged the station with graffiti, according to police.

The gathering was declared an unlawful assembly and then just before 9 p.m., Tigard police declared the demonstration a riot. One person, 20-year-old Zane Saleem Bsoul, was arrested and faces a riot charge.

The group of people involved in vandalism left the scene.

Earlier on Thursday, some businesses in downtown Tigard boarded up in preparation for the planned protest.

1 / 11
Tigard Police
Police declared a riot and arrested one person in Tigard, Ore. on Thursday, Jan. 7, 2021. A group broke windows and tagged businesses and the police department with graffiti.

Just before 10 p.m., another crowd gathered for a vigil for the man killed by police, 26-year-old Jacob Ryan Macduff.

Moving on to the vigil portion of the night. The location where Jacob MacDuff died, on Hall and Bonita. pic.twitter.com/q1hzW1uDHb

The police shooting took place late Wednesday afternoon. The officer shot and killed Macduff, who was armed with a knife following a reported domestic disturbance, according to the Tigard Police Department. Officers were called to the disturbance just after 4 p.m. at Southwest Hall Boulevard and Bonita Road.

According to police spokesperson Kelsey Anderson, officers attempted to arrest Macduff, as he was leaving in his vehicle. He refused to surrender.

Officers then discovered he had a knife, Anderson said, and during the subsequent struggle, an officer shot and killed Macduff.

The shooting is under investigation by the Washington County Major Crimes Team and additional details will be released as they become available.

During a live Facebook chat Thursday addressing the shooting, Mayor Snider said, "any loss of life is tragic," and he doesn't wish this outcome on anyone.