PSU football player gets probation for impersonating a cop

A Portland State University football player who was arrested for impersonating a cop entered a not guilty plea Friday morning. 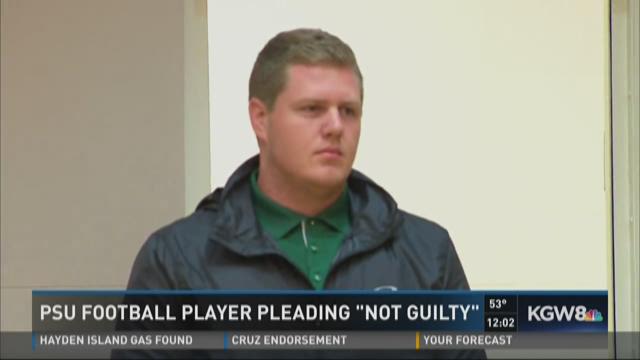 PORTLAND, Ore. – A Portland State University football player who pleaded guilty to impersonating a cop was sentenced to one year of probation.

Troy Bacon was also ordered to pay a $500 fine.

Sherwood police said the incident occurred on March 22 when an officer saw a parked Dodge Charger blocking a Honda Accord on Southwest Pacific Highway at Greenburg Road.

The driver of the Honda had been stopped by someone claiming to be a deputy.

"He got behind me and started flashing his beams and he pulled aside me and revved his engine," the victim told KGW. "He was waving his hands in the air, said I was going 95 on the highway, and I was driving erratically, and I was texting and driving and all these things."

The officer pulled over and saw a man, Bacon, yelling at the victim, according to Sherwood police.

"I was pretty freaked out," the victim said. "That was my first experience being pulled over and the way he was, his mannerisms and everything, it was really scary."

The officer asked if everything was fine and Bacon told him that he was an off-duty, part-time deputy with the Riverside County Sheriff’s Office. Bacon then showed the officer a badge with the title “Junior Probation Officer,” police said.

Bacon’s Dodge Charger was a rental car with no emergency equipment or lights, according to police.

The Sherwood officer and Tigard police who arrived to assist him decided to release Bacon and pursue an investigation.

He was arrested April 19 after a grand jury returned a secret indictment.

Bacon is listed as a 6-foot-4, 295-pound offensive lineman on Portland State’s website. He transferred to PSU from Boise State after playing high school football in Oak Hills, Calif.

Bacon would like to have a career in law enforcement, according to his biography page.

PSU said Bacon was still a member of the football team, but officials will review his status after looking over court documents from the sentencing.

Bacon took to Twitter the day of his arrest to defend himself.

2 sides to every single story. Don't believe what you hear.