A shooting in the Pearl District. Another near children playing. Portland sees more gun violence over the weekend

The owner of Everybody Eats PDX released a statement saying a group of people attacked one of their employees and someone fired shots in "self defense". 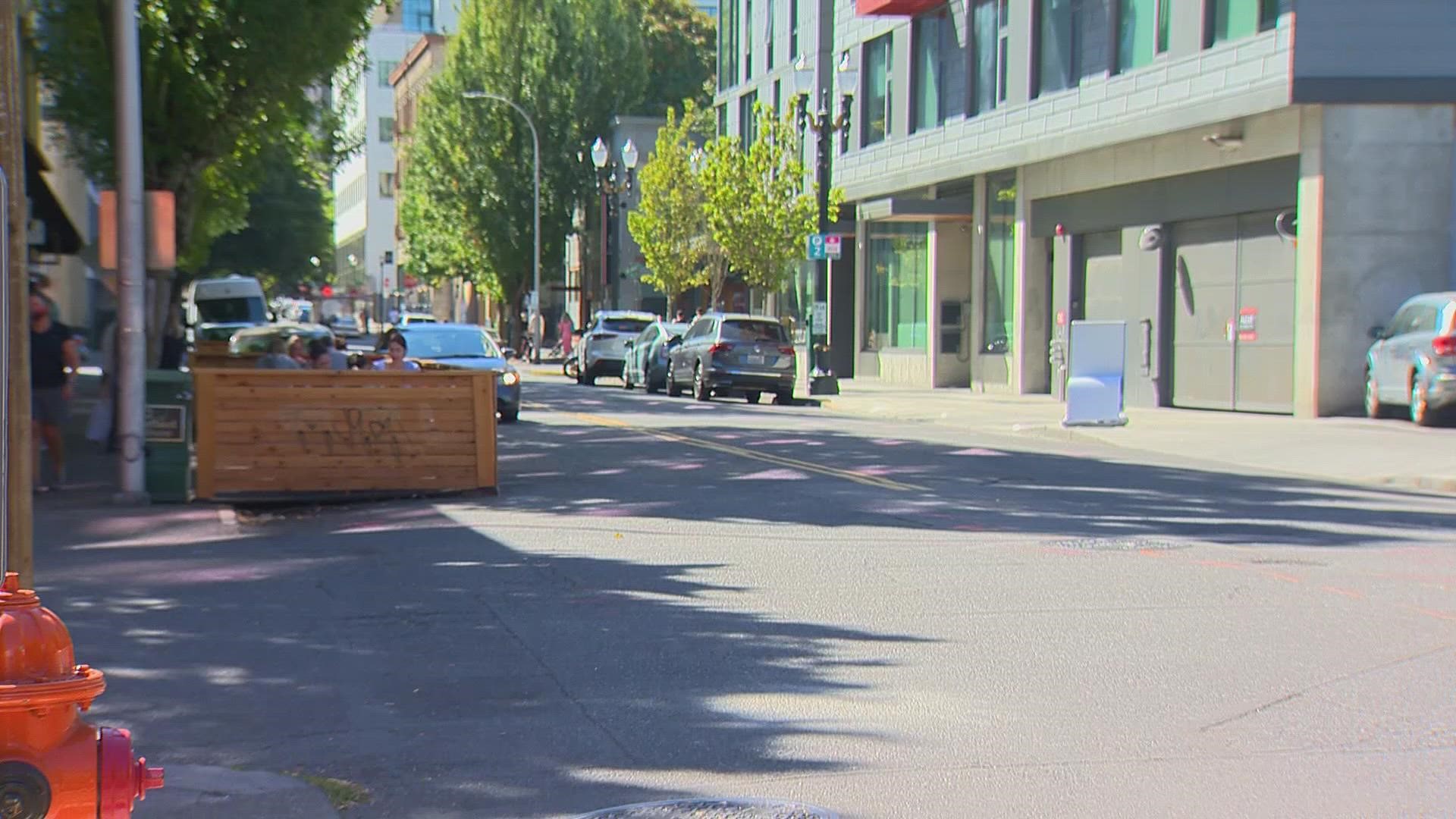 PORTLAND, Ore. — Portland's streets saw yet another weekend of violence, with two shootings happening in the middle of the day. A shooting in Portland's Pearl District, a busy place on a weekend, left three people hurt. Another drive-by shooting in a Northeast Portland neighborhood happened near where children were seen playing.

The shooting in the Pearl occurred around 1:20 p.m. Saturday. Witnesses said shots rang out at Everybody Eats PDX, a restaurant on Northwest 10th Avenue and Davis Street. The restaurant is surrounded by several other businesses including breweries, shops and places to eat. Dozens of people were also at the Art in the Pearl event just yards away.

"It was definitely kind of sobering for a lot of us," said Steve Williams, an employee at World Foods, just a block away from the restaurant. "It's not like I'm working in a war zone, just in a downtown fancy Pearl District store."

Williams says scared people ran from the direction of Everybody Eats toward World Foods, and many ran inside the store.

"People eating brunch were coming in, some people weren't," Williams added. "Everyone was kind of huddled together. We had the doors closed waiting to see what would happen."

According to a press release from the Portland Police Bureau (PPB), the shooting was part of a fight inside the restaurant between people who knew each other.

Police determined that a verbal argument led to a physical fight among the group. Shots were fired. The group then moved outside the restaurant where more shots were fired.

PPB said a woman and two teen boys were hurt in the shooting and all were involved in the initial fight. They were driven to a hospital and are expected to live.

Police arrested a man but as of Wednesday haven't said whether charges have been filed.

One of the owners of Everybody Eats shed more light on what happened in a statement sent to KGW Tuesday night. Johnny Huff Jr. first apologized to everyone there at the time. He said the situation was between "an outside group of people and one particular employee"

"After a failed attempt to de-escalate the situation, a violent attack ensued on one of our employees. The protection of our customers, employees, and business is our top priority," Huff wrote.

He went on to say, "Due to this large group of individuals putting ALL of our staffs and patrons life in danger, shots were fired by a licensed weapon holder in self defense."

KGW asked for clarification on who he is referring to but haven't heard back as of Wednesday afternoon.

He also referenced a viral video from the end of the incident inside the restaurant in which a succession of gun shots are heard.

"The rapid shots heard at the end of the video were NOT FROM THE OWNER going on a rampage, mass shooting or any other scenario the circulating video intended to paint, but that of someone continuing to fire at the the restaurant building from outside," Huff said in the statement.

Huff said the situation doesn't reflect the integrity of the owners or mission of their business. He thanked everyone for the outpouring of love and support as they work through this.

On Wednesday, plywood covered a cracked window with what appears to be a bullet hole. The restaurant was open for business.

RELATED: Police respond to 9 separate shootings in 16 hours across Portland

Saturday's shooting in the Pearl District wasn't the only one in the city this weekend. Another shooting happened a couple of hours later in a Northeast Portland neighborhood on Highland Street and Rodney Avenue. A man who lives in the neighborhood named Adam Johnson caught the drive-by shooting on his home's security camera.

Johnson said he watched three cars pull up and people in one of them shoot at another.

"I grabbed my five-year-old, hid her here behind the fence," Johnson said. "There were about five other kids playing in the neighbor's front yard too and they kind of all got down too."

Johnson ran to his youngest on a scooter around the corner.

"He was down there and shots had come this way. So I didn't know what I was really going to find. But luckily he just went into the garage - which he never does - and he was OK," Johnson said.

Although shaken about the shooting in their front yard, the family said they don't want what happened to change how they live.

"If we let something like that— fear— change us then that problem will continue to persist," Johnson told KGW.

Rather, they want this incident to spark emotion and action among neighbors and city leaders when it comes to out-of-control gun violence.

"It doesn’t change my opinion [on Portland]. It only boldens me to continue to try help to change things," Johnson added. "There is a lot of inaction from our city leadership... A lot more can be done. If this was happening on the mayor's lawn it would be a different reaction, or any of our council members' lawns."