Oregon State pitcher Luke Heimlich, who The Oregonian on Thursday reported pleaded guilty to sexually molesting a 6-year-old female family member when he was 15 years old, will not start in Game 1 of the Beavers' Super Regional series against Vanderbilt, according to multiple reports. 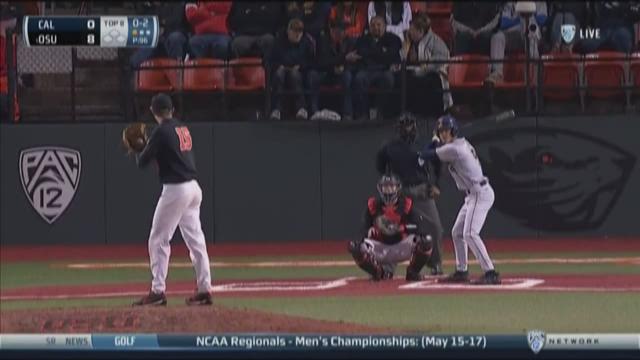 Oregon State pitcher Luke Heimlich, who The Oregonian on Thursday reported pleaded guilty to sexually molesting a 6-year-old female family member when he was 15 years old, will not start in Game 1 of the Beavers' Super Regional series against Vanderbilt, according to multiple reports.

Luke Heimlich will not pitch tonight— his decision. Wants to do what’s in best interest of team & not be distraction. Jake Thompson to start

Heimlich released a statement through his attorney Friday afternoon that reads in part, "I've respectfully requested to be excused from playing at this time."

"I have taken responsibility for my conduct when I was a teenager. As a 16 year old, I was placed on juvenile court probation and ordered to participate in an individual counseling program. I'm grateful for the counseling I received, and since then, I realized that the only way forward was to work each day on becoming the best person, community member and student I can possibly be. I understate that many people now see me differently, but I hope that I can eventually be judged for the person I am today.

"I'm so proud of our team's accomplishment and don't want to be a distraction. Therefore, I've respectfully requested to be excused from playing at this time."

Heimlich has been one of Oregon State's top performers this season. He is 11-1 with a 0.76 earned run average, with 128 strikeouts and only 22 walks in 118 1/3 innings. He is ranked by Baseball America as the 43rd best prospect in the MLB draft, which begins Monday.

Oregon State (52-4), the No. 1 overall seed in the NCAA tournament begins play in the best-of-3 Corvallis Super Regional on Friday against Vanderbilt. The winner of the super regional will advance to the College World Series.

The news of Heimlich's crime first surfaced after he failed to complete an annual check-in as a registered sex offender in April. Oregon State's ace left-handed pitcher registered in Benton County after he arrived at Oregon State.

The crime occurred in August 2012 in Heimlich's hometown of Puyallup, Washington, according to court documents obtained by The Oregonian through a public records request. The state of Washington classified Heimlich as a low-risk sex offender.

According to The Oregonian, it is unknown if Heimlich told Oregon State about the crime before he arrived on campus in 2014. The school is informed by Oregon State Police of all registered sex offenders among its student body.

Heimlich, coach Pat Casey and athletic director Scott Barnes either did not respond or denied Oregonian requests for comments about Heimlich.

KGW asked Oregon State if it knew that Heimlich was a registered sex offender or when it found out, but the school said it couldn't comment because student information is protected by the federal Family Educational Rights and Privacy Act.

The school did release a statement, which stated in part that the school takes the report very seriously and does not condone the conduct as reported.

The NCAA does not have a policy that bars convicted felons from competing in intercollegiate play, deferring instead to athletic conferences and schools. The Pac-12 Conference defers to schools.

Oregon State does not have a policy barring student-athletes with prior felony convictions from competing. The athletic department doesn't ask students to disclose criminal convictions during the admissions process.

The mother of the victim told The Oregonian that she's "appalled that the college he's going to would even have him on their team." She said her daughter was young enough that "she doesn't really remember everything that happened" but that because most of the Heimlich family has sided with Luke, her daughter has been ostracized from family events.

"He got two years of counseling and classes," she said. "My daughter's life has been changed for the rest of her life."

Brenda Tracy is a rape victim advocate who lectures to athletic departments around the country. She herself was gang-raped by a group of men in the 1990s that included Oregon State football players.

"This little girl didn’t deserve that and I am angry people are rallying around him and not her," Tracy told KGW.

"The victim will live with it for her whole life," Tracy said. "We have a little girl who was violated and hurt and will suffer from it the rest of her life and we have a young man who will probably play professional baseball."

In March 2012, the victim reported the abuse to her mother. The father alerted authorities.

Heimlich pleaded guilty to one count of molestation between February 2011 and December 2011, during which he was 15. The other charge was dismissed as part of a plea bargain. He admitted he had sexual contact with the girl in his own handwriting.

The Oregon State pitcher completed a diversion program, was given two years of probation and attended sex offender treatment for two years, according to court records.

His original sentence of 40 weeks of detention was suspended and he served no time because he successfully completed probation.

"I don’t think we should be recruiting or signing any athletes that have felonies," said rape victim Tracy. "And I’ll say specifically sexual violent histories. I think the coach could at least sit him and not start him. And he shouldn’t have been recruited in the first place."