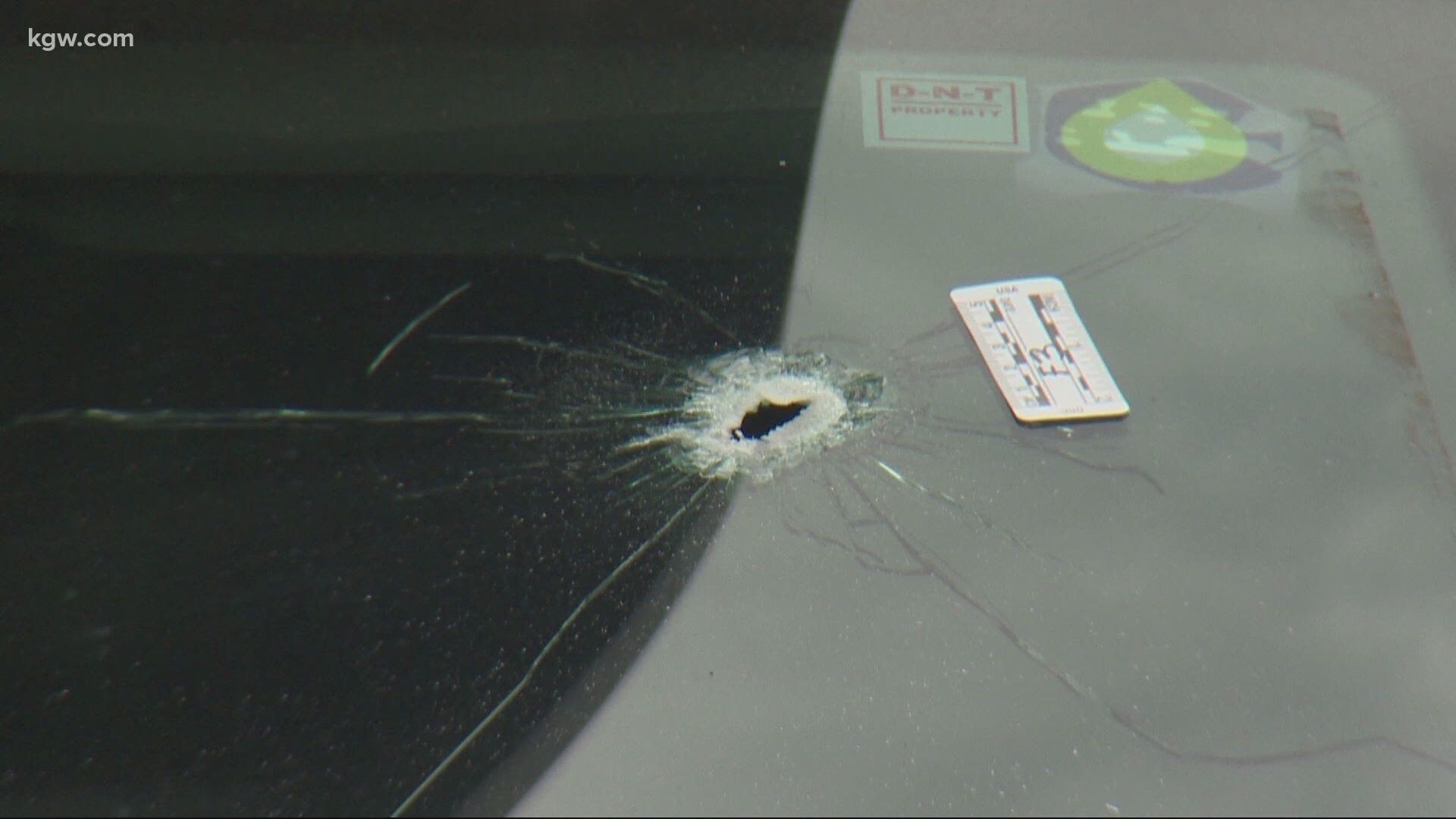 PORTLAND, Ore. — A shooting that left a woman injured, homes and cars riddled with holes and police counting more than 150 shots fired Friday night capped off an especially violent month for the city of Portland.

People living in the Montavilla neighborhood’s Goodrick-Spencer Apartments and Scruggs Townhomes in Northeast Portland said they heard the first shots around 11 p.m.

"It was like a firecracker from afar you know and it began coming close, and next thing we had was like a blaze of bullets," Kemoh Sulimani said.

Sulimani said he was just sitting at his computer when it happened.

"One bullet came right into my room, missed me barely on top of my head, and landed on the wall. That was when I hit the floor, turned the light on, and began crawling," Sulimani said.

"By the time I looked out my window, just all hell started breaking loose," Marks said. "There was a ton of gunshots so I got my girlfriend and my dogs into the back of our apartment. It must have gone on for 30 seconds."

After the gunshots stopped, Marks went outside.

"You could really smell the gun powder in the air too. It was really intense," he said.

Marks said he noticed a young woman up against a car.

"I came over and put a tourniquet and got her to stop bleeding and kind of tried to help her," Marks said.

Police said that woman was shot in the arm and should be OK. Investigators said at least seven cars and eight occupied apartments were hit.

"They really just shot everything. You can see bullets everywhere. I don’t know what they were aiming at. Just everything, I guess," Marks said.

The circumstances around why the shooting happened are still unclear. Some residents believe it’s gang-related, but Portland police have not released those details. The Portland Police Bureau has gone through some changes. The Gun Violence Reduction team, formerly the Gang Enforcement Unit, was disbanded in June and at that time, how shootings would be investigated was still up in the air.

On Monday, Lt. Tina Jones admitted even officers were stunned by the magnitude of this shooting.

"It just shocked the conscience," she said. "I've been doing this work for a long time, and I specialized in gun violence years ago. And I've never encountered any crime scene with that amount of gun fire."

A tweet from Portland Police Sgt. Pete Simpson gives some insight into the scale of the shooting. In the tweet, he said, “I worked violent crimes from 1998 to 2010, focusing on gun violence. I cannot recall a single case where we had this many shots fired in one incident.”

I worked violent crimes from 1998 to 2010, focusing on gun violence. I cannot recall a single case where we had this many shots fired in one incident. Insanity. https://t.co/Oz1OcAi8HT

The shooting itself and the number of rounds fired aren't the only reasons police are rattled. For months now, they've been reporting spikes in shootings, stabbings and other violent crimes.

Last month, the trend culminated in a jarring headline: With 15 homicides, July 2020 was Portland's deadliest month in 30 years.

One of the victims was 18-year-old Shai'India Harris.

Harris' family thought he was an obvious suspect, and they're mad it took weeks for the bureau to get the word out.

"That is outrageous," said Harris' aunt Tierra Howard. "Where are our officials at?  Why is it so quiet?"

On top of that, Lovell said, calls for reform are coming to fruition.

Earlier this year, the city disbanded PPB's Gun Violence Reduction Team after a 2018 audit found officers in it were disproportionately targeting black Portlanders during traffic stops.

Now, the chief said, the city is seeing one impact of that move.

"What was really lost was the follow-up piece that assisted in the investigation. Everything from picking up video to going out, contacting people and things of that nature," Lovell said.

As a result, the bureau is moving patrol officers to the detective division to try and make progress on a growing mountain of investigations.

Portland police said if anyone has any information about Friday's shooting, they're asked to call police non-emergency at 503-823-3333 and reference case number 20-238571.

RELATED: Family of woman murdered in SE Portland speaks out