Nearman was sentenced to 18 months bench probation, 80 hours of community service, $200 in fines and $2,700 in restitution for damage to the capitol building. 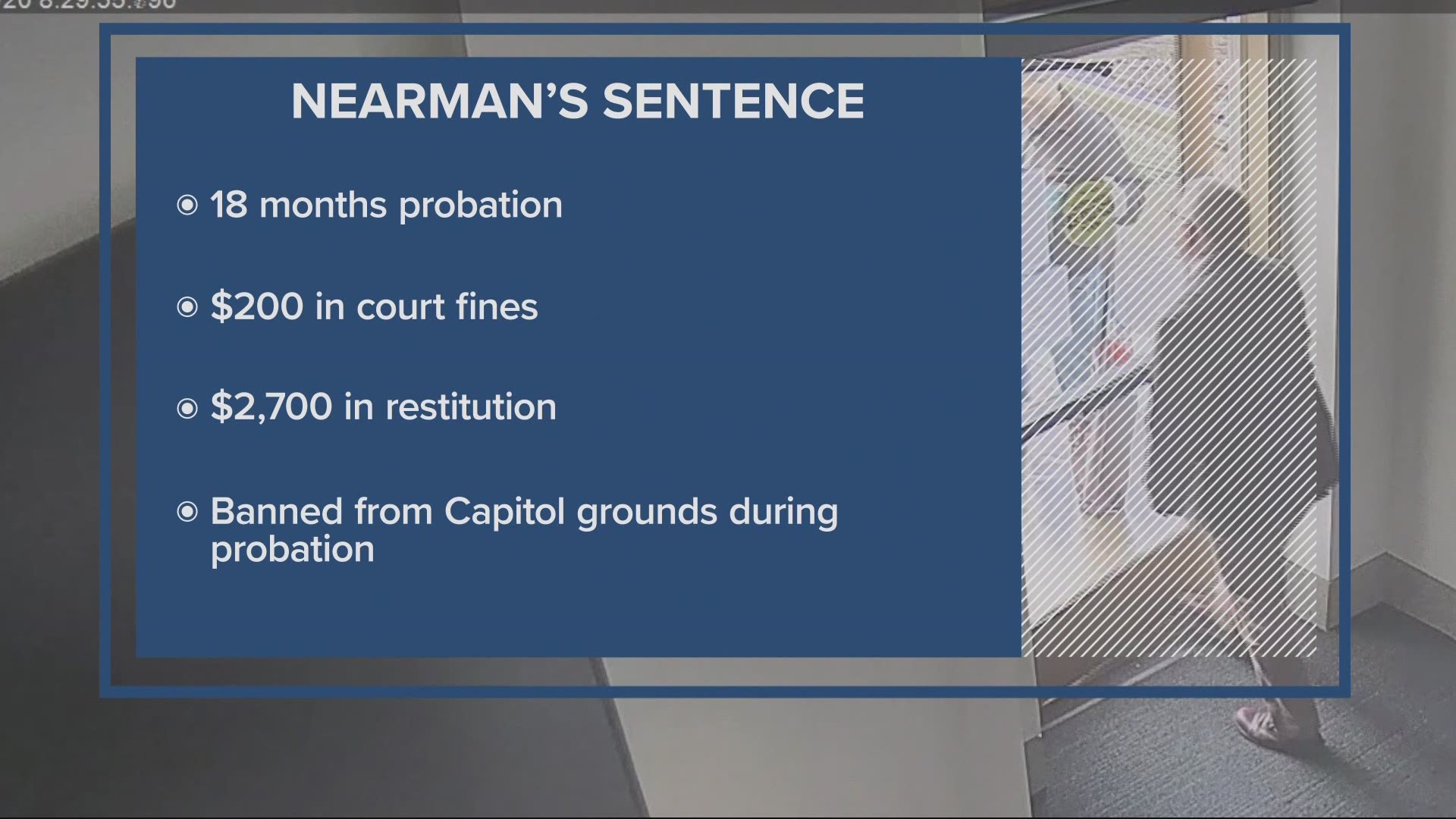 SALEM, Ore. — Former Oregon state Rep. Mike Nearman pleaded guilty Tuesday morning to a charge of first-degree official misconduct for his role in the Oregon Capitol breach last December. As part of a plea agreement, a charge of second-degree criminal trespass was dismissed.

"I had no intention of harming anyone," Nearman said during his hearing. "It provided the appearance that I was helping citizens enter the Capitol, so that would make me appear favorable to certain citizen groups...and I don't support what they did when they entered."

Judge Cheryl Pellegrini sentenced Nearman to 18 months of bench probation, during which he will be banned from the capitol grounds, 80 hours of community service, $200 in fines and $2,700 in restitution for damage to the Oregon Capitol.

During the hearing, Judge Pellegrini talked about the responsibility that comes with public service.

"Democracy is built on principle that when there's disagreement, that starts the public discussion and debate. It doesn't end it," she said. "That's the province of tyranny and anarchy. And we're not that. We're so much better than that.

Last month, Nearman became the first member of the state House to be expelled in its 160-year history.

Nearman, a Polk County Republican, was seen on security camera video letting violent, far-right protesters into the capitol on Dec. 21. The protesters barged in and sprayed police with chemical irritants. A number of them were armed.

Video emerged in early June showing Nearman choreographing how he would let protesters into the capitol, pinpointing the door he would open for them and disclosing his cellphone number so protesters could text him.

RELATED: 'I will deny it': Video shows Rep. Nearman implying he would open door during Oregon Capitol protest

House Speaker Tina Kotek credited riot police, who pushed out the protesters, with preventing a full-scale assault like the one by supporters of former President Donald Trump at the U.S. Capitol on Jan. 6. Kotek said some officers were visibly injured and shaken.

Tuesday morning, Judge Pellegrini drew clear ties between Nearman's case and the discussions playing out during the January 6 hearing in Washington, DC. She quoted one of the Capitol police officers who testified.

"He said a thing that just stuck in my mind as I came into work this morning, which is that Democracy is bigger than any person. And it's bigger than any political party,'" she said. "I think he's right about that.

Shortly after the hearing, the Marion County District Attorney Paige Clarkson issued a statement. It read:

This plea and sentencing concludes an embarrassing and disgraceful event in our state’s history. I am thankful that no members of law enforcement, or anyone else were seriously injured as a result of Mr. Nearman’s irresponsible actions. Additionally, I am grateful to the Oregon State Police for their complete and thorough investigation that led to this conviction.

KGW's Maggie Vespa caught up to Nearman as he was leaving the Marion County courthouse but he refused to answer any questions.

With reporters waiting out front, former State Rep. Mike Nearman left the Marion Co. courthouse thru a side entrance.

During sentencing, the judge spoke at length about today’s January 6th hearing & how democracy is “bigger than any person.”

I caught up to Nearman w/ my phone. pic.twitter.com/rQIdXbyK6w