'Somebody needs to be accountable:' Family with bullet-punctured home calls out Clark County deputies for deadly shootout

Two people were inside when bullets flew through their home as Clark County Sheriff's Office deputies pursued a man outside who was wanted for assault with a gun. 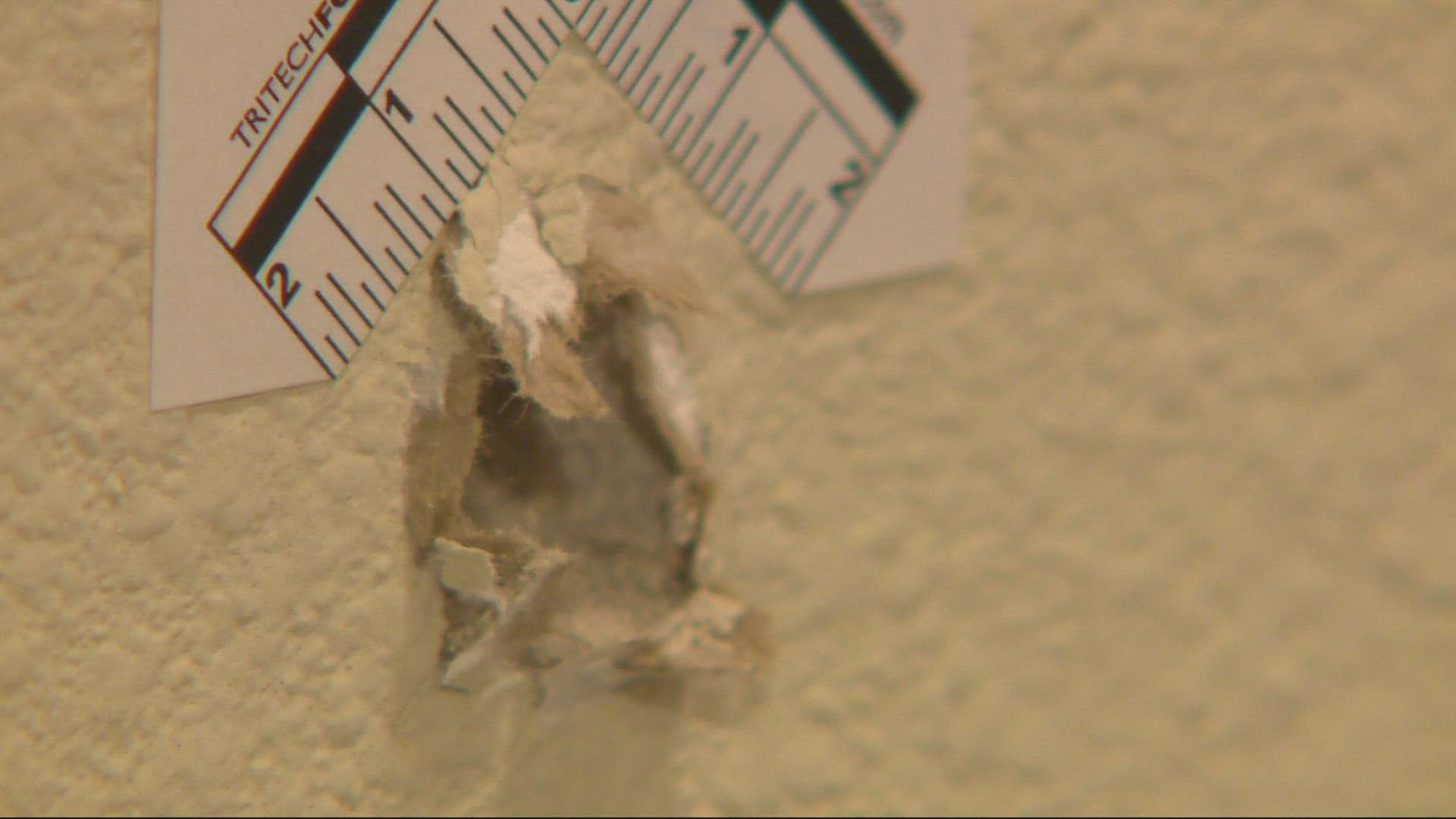 VANCOUVER, Wash. — A Vancouver family is counting bullet holes in their home. They said Clark County deputies did not properly consider their safety during a deadly shootout on Sunday morning.

Deputies said they tried to pull over a man who was wanted for assault with a gun. The man led them on a chase until they forced his SUV off the road. They said he got out with a gun, and shots were fired, although they did not say who fired shots first.

Cony Ramirez said her mother and daughter were both home at the time, as bullets flew through the walls. Her home is now riddled with bullet holes, some going through the entire length of the home off of NE 49th Street.

"I thank God. I think it's a miracle this bullet didn't go straight, it went there," Ramirez said, pointing slightly away from where her daughter was sitting. "I'm thankful my family is okay."

The unidentified man died in her driveway.

"This trauma isn't going away [soon]," she said.

Ramirez's son, Renz Soriano, was working overnight when bullets flew through his room.

"I just think, what if I wasn't at work?" he said. "Thinking about it is really scary."

The family found a leftover bullet fragment behind their punctured washing machine Monday morning. The machine flooded their kitchen when they tried to use it, not knowing it had been hit, too.

Ramirez is now trying to figure out repairs to her home by contacting the county and city, but she says she is not receiving clear guidance.

"Somebody needs to be accountable," Ramirez said. "It's just our responsibility to find the right person who can fix all this."

The shooting happened just after 2 a.m. Sunday. From then to early afternoon, the family said investigators tracked through their home, without sharing much information. All the while, a dead man was in their driveway.

Ramirez feels the deputies involved, who are now on leave, did not consider the safety of the neighborhood as they fired upon one wanted man.

"I don't know how you were trained, but I believe you chose this job because you want to protect the community. You wanted to protect us, not to hurt us," Ramirez said. "But the way I see those bullets there, it's not something protecting us."

A memorial of red flowers and bandanas sat on the sidewalk Monday, just outside of the family's bullet-punctured back wall.

KGW reached out to the Clark County Sheriff's Office, Vancouver Police, the medical examiner's office, and the SW Washington Independent Investigative Team for details about the investigation, who the man was, who fired shots first, and exactly how the man died. However, as of Monday afternoon, those agencies had not provided new details.

Meanwhile, as gun violence increases across the country and Pacific Northwest, Cony Ramirez is counting bullet holes and her family's blessings.

"Don't be silent about it," Ramirez said. "We all need to come together to do something about it."