Surveillance video captured the confrontation near Northeast 60th Avenue and Holladay Street. The suspect is still on the loose. 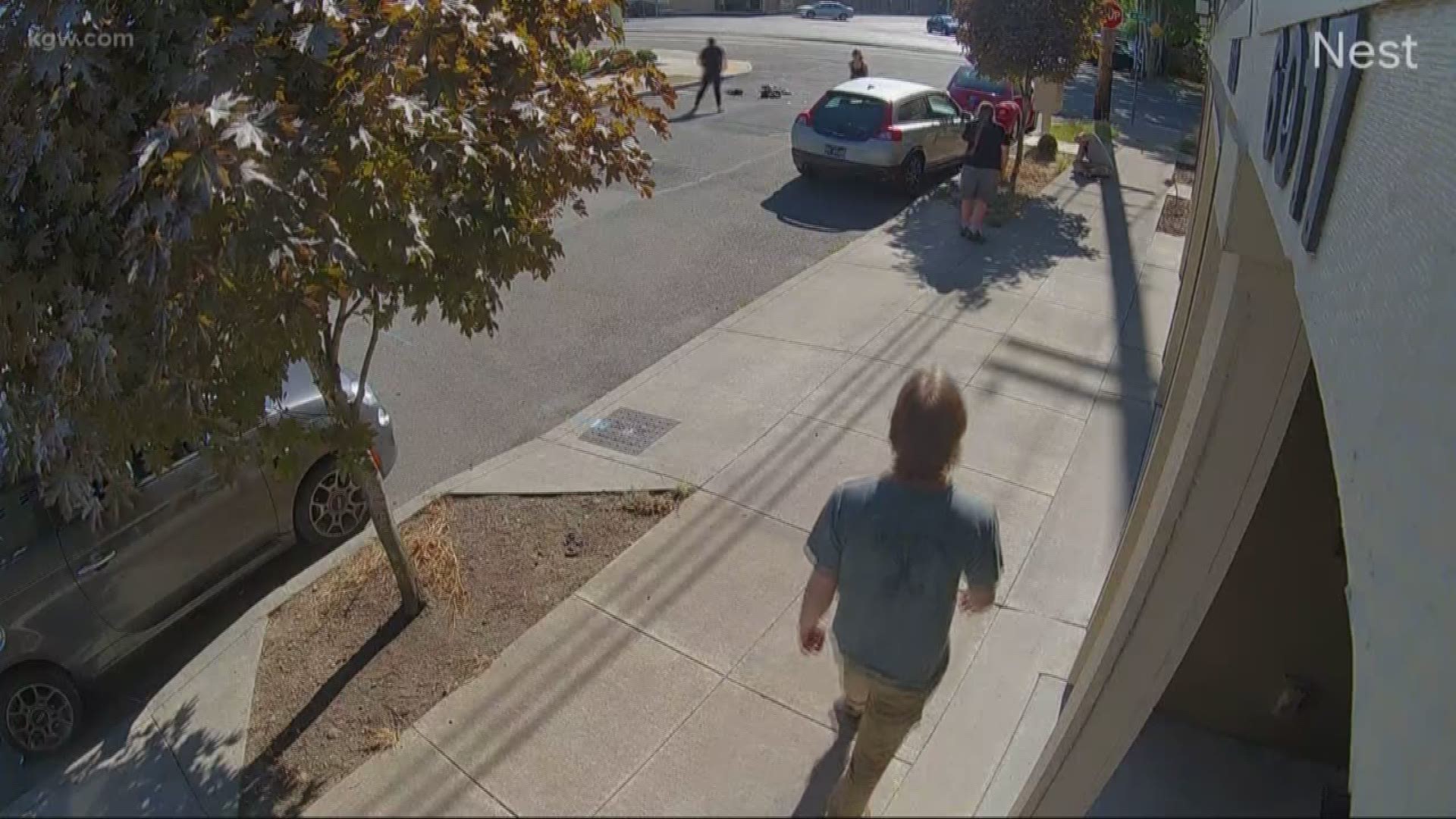 PORTLAND, Ore. — A Northeast Portland man is recovering with five staples in his head after he said he was attacked outside his home Friday evening. The incident was caught on camera and the suspect remains on the loose.

Shawn Mitsakis and his girlfriend are still piecing together what happened just outside their doorstep near Northeast 60th Avenue and Holladay Street. Mitsakis told KGW he was attacked at around 5 p.m. after confronting a man who was trying to use his neighbor’s outdoor electric outlet. He said it's a chronic problem that has forced the building to disable the electrical flow to the outside.

“I am still incredibly emotionally shaken,” Mitsakis said. “We are in a little war zone here and it's very tough for us to go outside, especially after it's dark.”

“But of course, they still come to plug in their phones and then act like they’re charging their phones in order to use our entry way as a shelter to do heroin,” he said.

Security cameras captured the altercation. They were installed a couple of months ago because of the number of people using the outlets and crowding the entryways, according to Mitsakis.

Mistakis has confronted people over the issue before, but this time that confrontation took a violent turn.

“He took a swing, hit me in the face. And then we struggled and wrestled into the middle of the street and he ran up the bridge and I realized that I was bleeding,” he said.

Surveillance video shows the suspect on top of Mitsakis, hitting him multiple times. He said it happened so fast that he is not sure if the man used a weapon or not.

Mitsakis fought back, but the man got away.

Sky Kelt, Mistakis' girlfriend, said most people who try to use the outlets just leave when asked.

"It’s only very few instances where it actually transpires into confrontation,” she said.

The suspect left a backpack behind, which Kelt dumped in the street. Inside, the couple said they found multiple needles.

Mitsakis is recovering with five staples in his head. He says he spent six hours in the hospital being treated for the head wound and multiple scrapes on his legs and shoulder.

The suspect has not yet been found, but Mitsakis and Kelt hope he will be identified soon and brought to justice.

KGW reached out to Portland police, but we have not yet heard back. If you have any information on this incident or the man seen in the security footage contact Crime Stoppers at (503) 823-4357 or send a tip online to Portland police.