Experts explain why their connection to the Proud Boys, a far-right extremist group, matters in their criminal case. 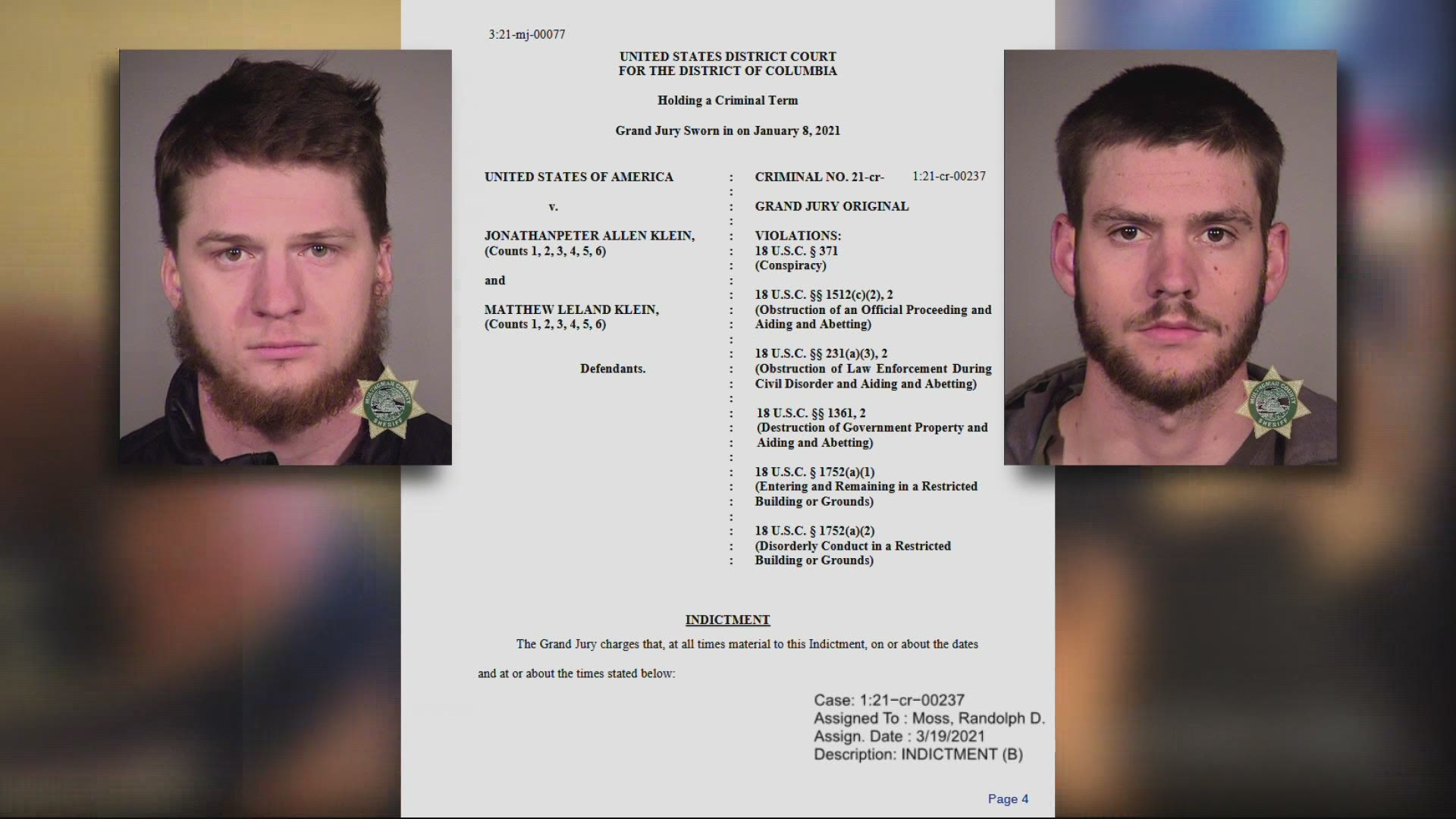 PORTLAND, Ore. — Two Oregon brothers have been arrested in connection with the deadly insurrection at the U.S. Capitol in Washington, D.C., on Jan. 6.

Prior to the Capitol insurrection, federal prosecutors said Matthew and Jonathanpeter were part of clashing rallies between Trump supporters and Black Lives Matter demonstrators at the Oregon Capitol in Salem on Sept. 7 and at Delta Park in North Portland on Sept. 26. Matthew Klein was charged with two counts of possession of a loaded firearm in public after a Proud Boys rally at Delta Park.

“Well, I think it's significant for a number of different reasons," said Alexander Ross, a professor at Oregon State University who has studied radical right-wing groups. "These brothers actually have violent records in Portland and Salem. So, they pretty much match a profile of a very violent right-wing counter-protester, advanced sort of insurgent in the Pacific Northwest."

According to federal prosecutors, the Kleins flew from Portland to Philadelphia on Jan. 4, two days before the violent insurrection led by supporters of then-President Donald Trump that resulted in the deaths of five people and left 139 police officers injured.

At the destructive rally, federal prosecutors cited photos they said show the brothers on a wall in a restricted area of the Capitol grounds. They said video shows Matthew Klein helping others climb a police barricade to ascend the wall. The brothers entered the Capitol minutes after it was first breached, with Jonathanpeter celebrating with other people who had forced their way inside, prosecutors said in court filings.

After exiting the Capitol, prosecutors said the brothers wrenched open a secure door on the north side of the building, forcing police officers to fend off the brothers, and another wave of rioters who were attempting to break into the Capitol.

"What we're seeing is the federal government built a case around the January 6th insurrection and said it's looking like a larger conspiracy,” said Randy Blazak, a sociologist and the founder of The Coalition Against Hate Crimes.

According to federal court documents filed this week and obtained by KGW, another right-wing group, Oath Keepers, allegedly communicated with the Proud Boys before the attack on the Capitol. In those documents, Oath Keepers leader Kelly Meggs allegedly wrote several messages including, "This week I organized an alliance between Oath Keepers, Florida 3%ers, and Proud Boys," and, "We have decided to work together and shut this (expletive)..down." Meggs also wrote that he had "orchestrated a plan with the Proud Boys" for Jan. 6.

“It really verifies a lot of what people were thinking," Ross said. "Going into this, that they probably started out as sort of like an attempt to create this urban savvy, almost fashionable right-wing fight club. And increasingly over the years, they're more and more militarized and sort of started fusing with more paramilitary groups."

Do you have a story idea for Cristin? Let us know. Email us at CallCristin@kgw.com.