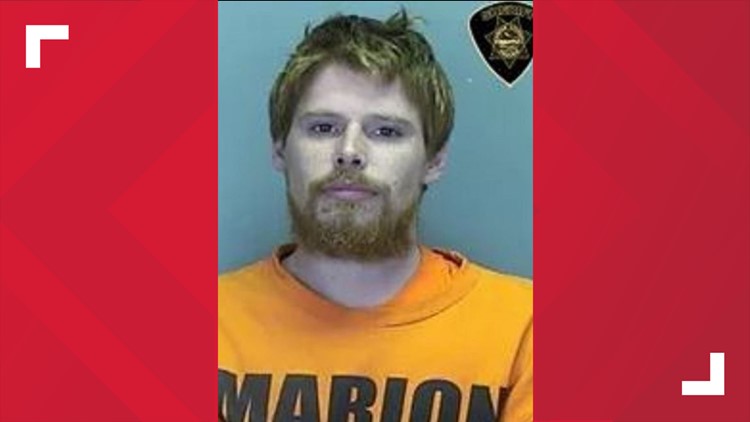 AUMSVILLE, Ore. — An Aumsville man has been charged with arson and assault after he set a house on fire Tuesday, trapping people and pets inside.

Marion County Sheriff's deputies were dispatched shortly before 5:00 pm to a residence in the 11000 block of Causey Lane S.E., between Aumsville and Sublimity.

Deputies found the front of a manufactured home, a carport, and multiple vehicles engulfed in flames.

Two adults and several dogs were trapped in the burning home, they learned. And fire crews had not arrived on scene yet.

Police went into the burning home themselves and helped an adult female and a disabled adult male out of the home.

Deputies were able to get the four dogs out of the residence as well.

One person from the home was transported to an area hospital with non-life threatening burn injuries.

Justin Jameson, 28, of Aumsville, was arrested and lodged at the Marion County Jail. He faces charges that include Arson 1 and Assault 2.

Jameson had been living in the home, but homeowners would not let him in Tuesday evening when he tried to retrieve items he said were his, according to a report in the Salem Statesman-Journal.

He reportedly tried to break down the door before lighting the fires. When someone in the yard confronted him, Jameson poured gas on him and lit him on fire as well.

Detectives from the Marion County Sheriff's Office are continuing the investigation.