11 Asian-owned Portland businesses vandalized in the past month

Hanoi Kitchen on Northeast Glisan and 79th Avenue was one of the 13 businesses targeted in late January. Eleven of those businesses are owned by Asian-Americans. 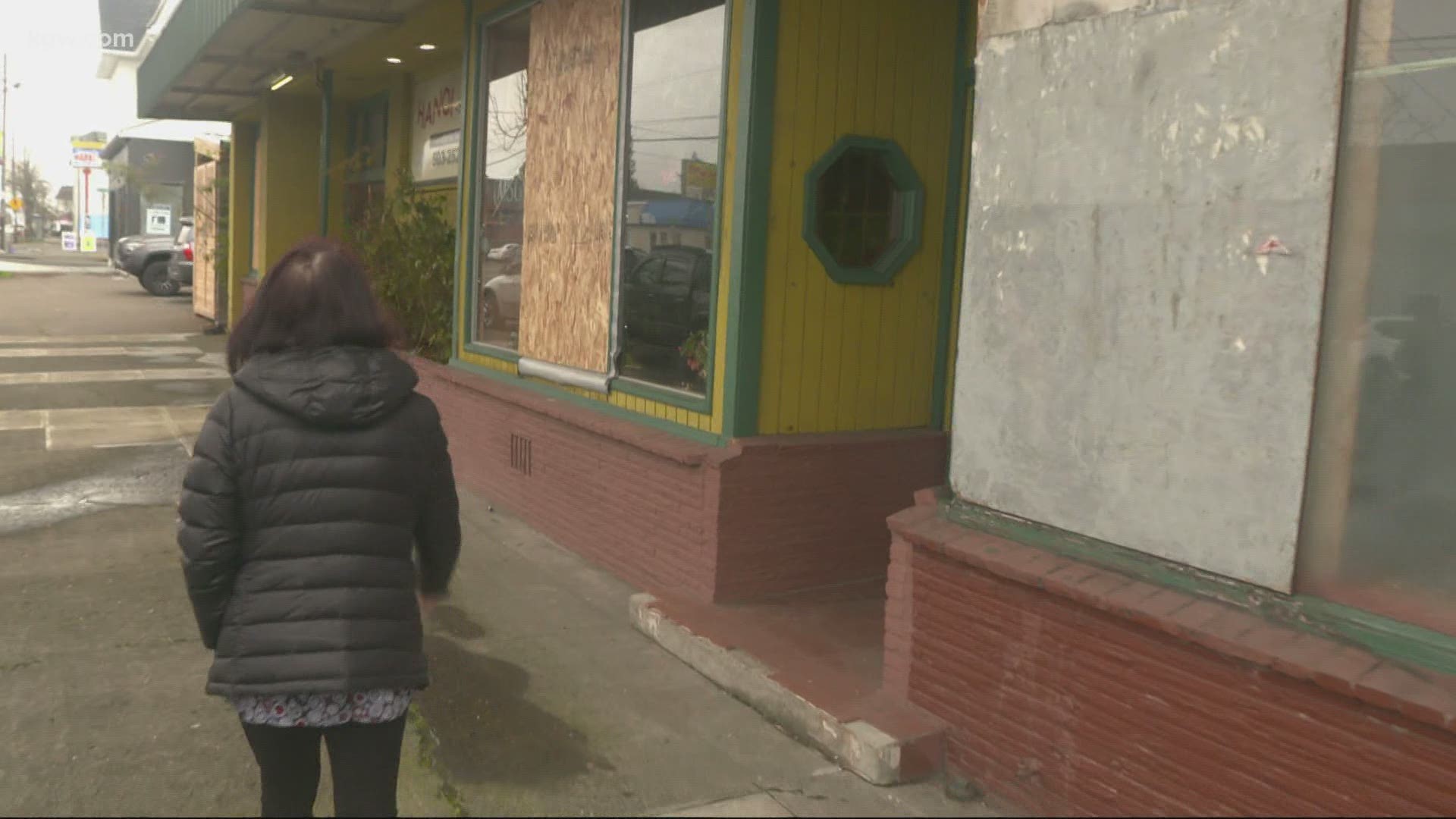 PORTLAND, Ore — Several Asian-owned businesses think racism could be behind vandalism in the Jade District and surrounding areas in Northeast and Southeast Portland.

The Asian Pacific American Network of Oregon (APANO) said it comes as anti-Asian sentiment grows in the city and around the country.

APANO said someone, or multiple people, threw rocks and bricks through windows in several businesses in one weekend in late January. In total, 13 businesses in East Portland were targeted in some way; APANO said 11 are owned by Asians.

It's one more blow to small businesses in East Portland, already struggling under the weight of the pandemic.

Hanoi Kitchen, on Northeast Glisan Street and 79th Avenue, was one of the 13 businesses in East Portland targeted in late January. They've been again hit since then, too.

Another restaurant hit, My Brother's Crawfish, posted security camera video on Instagram, showing someone throwing a rock through their window.

Nguyen feels she was targeted because of her race.

KGW learned late Tuesday that a commercial building next door to Hanoi Kitchen had its windows broken that weekend, too. The building's owner provided KGW photos and surveillance video from that night.

Police confirmed Tuesday evening they arrested a man named Toan Van Tran, 44, on January 30 for criminal mischief at a commercial building in the 7900 block of Northeast Glisan.

According to the Multnomah County Sheriff's Office, Tran was arrested and booked into jail again on separate charges February 21.

PPB could not provide information about whether Tran is linked to any of the other vandalisms at this time.

"We don't know the direct motive behind those, but we know that 11 of those businesses are Asian-owned," APANO Development & Communications Director Allie Yee said, "This is not the first time that there's been vandalism in the district since COVID begun."

Yee said she believes it's part of a larger anti-Asian sentiment growing since the start of the pandemic.

"We've seen physical assaults being reported on Asian community members, so it makes you concerned when you're going about your life, I think, and concerned about what people may do or say to you and where this ends," Yee added.

Portland's Chinese community has been facing discrimination since the world first heard about the coronavirus. Restaurants in the Jade District were suffering losses in business a year ago due to unfounded fear and rumors.

Since January 2020, the Oregon Department of Justice Bias Hotline has received 78 reports from Asian Americans and Pacific Islanders.

"I feel unsafe, really unsafe, in my place," Nguyen said, "I've been living here running this restaurant for so many years, I never feel so unsafe as it is right now."

Nguyen hasn't filed a police report yet. Even if she does, she says she isn't hopeful it will lead to an arrest. She is calling on police to step up patrol and enforcement.

APANO said in a statement that more law enforcement won't solve this problem.

While the organization is supporting the affected businesses by paying to fix damage and connecting them with resources, they said fixing the root issue takes more work.

"We're really thinking about how we keep our community safe and how we root out racism that we're experiencing now," Yee said. "And I think that's through community strength, through reaching out to each other, supporting the businesses that have been impacted, checking in on each other, doing bystander intervention trainings: If you see something, how can you be an ally and supporter."

KGW reached out to the Portland Police Bureau to get more information about the string of vandalisms.

Police said they have taken reports in the Jade District and other places in Southeast and Northeast Portland where people broke windows.

"Those cases are under investigation and will be presented to the district attorney’s office when the investigations are complete," Lt. Greg Pashley wrote via email.

Lt. Pashley said he did not know whether more than one suspect was involved. Again, PPB could not provide information about whether Tran is linked to any of the other vandalisms at this time.

RELATED: Community Voices: The Chinese experience in Oregon from past to present