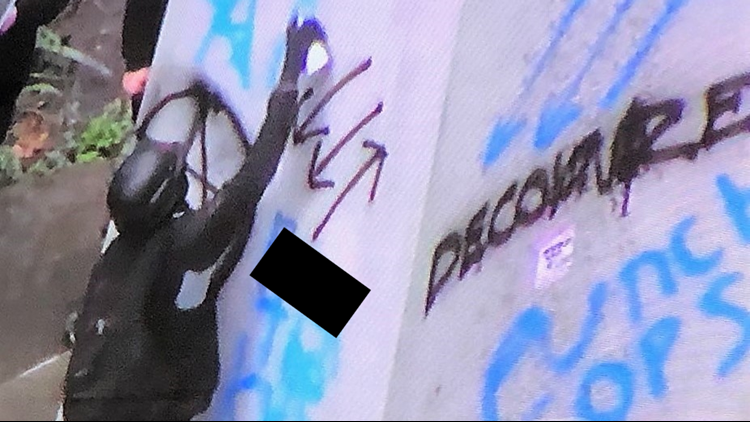 Photo by: Portland police
Wanted vandalism suspect during a demonstration in downtown Portland on Feb. 8, 2020.

The demonstration was planned as a counter-protest to a Ku Klux Klan rally expected to take place outside the Multnomah County Courthouse.

Police tweeted early Saturday that the planned rally was canceled. But members of Rose City Antifa and other counter-protesters still showed up at Lownsdale Square Park, at Southwest 4th Avenue and Main Street, Saturday morning and demonstrated for about four hours.

The counter-demonstration was peaceful at first, Portland police said, but “some people began acting in a violent, threatening manner against attendees who were legally capturing photos and videos.”

People used metal-tipped umbrellas to jab others and chase them down the street, police said. Several objects, including rocks, concrete, batons, cans, food, and incendiary devices believed to be flares, were thrown at community members and officers, according to police.

There was also vandalism, including spray paint on walls and a war memorial. Police arrested Willy Cannon, 35, and charged him with Criminal Mischief I and Abuse of a Memorial to the Dead.

The two other people arrested were Heaven Davis, 19, for Criminal Mischief, and videographer Brandon Farley, 31, for disorderly conduct.

Another vandalism suspect is still wanted by police. Anyone who knows the identity of the suspect or has more photos of crimes that took place during the demonstration is asked to email them to CrimeTips@portlandoregon.gov.

Wanted vandalism suspect during a demonstration in downtown Portland on Feb. 8, 2020.
Portland police

A pedestrian was also hit by a driver at Southwest 2nd Avenue and Madison Street during the demonstration, police said. The pedestrian was taken to a hospital with a non-life-threatening injury. The driver remained at the scene and cooperated with police.

Portland police asserted that officers did not use force against anyone during the demonstration.

"I want to acknowledge the community members who came down to peacefully assemble and exercise their freedom of speech rights," said Chief Jami Resch. "Unfortunately, a group of people chose to engage in dangerous, illegal behavior. I appreciate the thoughtful, measured response by our officers and law enforcement partners."

Vandalism during demonstration in downtown Portland 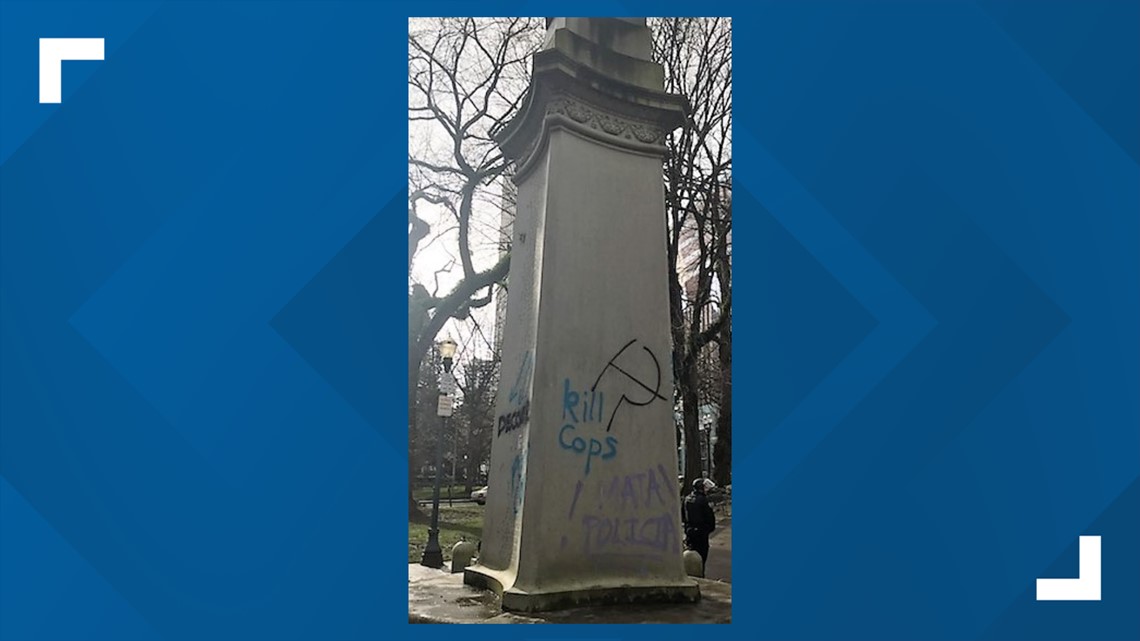 RELATED: New Portland Police Chief spells out problems facing the bureau and what her leadership will bring