Ten people were killed and nine others wounded during a shooting at Umpqua Community College near Roseburg Thursday morning.

Victims taken to a nearby hospital after a shooting at Umpqua Community College
Author: KGW Staff
Published: 1:21 PM PDT October 3, 2015

ROSEBURG, Ore. -- Ten people were killed during a shooting at Umpqua Community College near Roseburg Thursday morning, including the shooter. Nine others were wounded, according to Douglas County Sheriff John Hanlin.

It is the deadliest shooting in Oregon's history.

During a press conference Friday, the names of the nine slain victims were released. They ranged in age from 18 to 67.

Mercy Medical Center officials in Roseburg said 10 victims were taken there with gunshot wounds to the head, throat and torso. One of the 10 died in surgery and three women were transferred to trauma facilities at Peace Health hospital in Springfield. They were expected to survive, but the hospital said one would likely have lasting neurological damage.

The shooter used a handgun when he shot classmates and his teacher at the college, according to Interim U.S. Attorney Billy Williams.

Responding to a report that the suspect asked the religion of a victim, Sheriff Hanlin said that he had also heard that, but it was "way too early to determine" if the shooting was a hate crime.

The medical examiner identified the shooter as 26-year-old Christopher Sean Harper-Mercer and determined the cause of death to be suicide after officers engaged him in gunfire, the Douglas County Sheriff's Office confirmed Saturday. He was a student in the class where the shooting took place.

During a press conference Thursday night, Hanlin commended "heroic" officers who responded to the scene and said crews were working to notify the victims' families before releasing their names. He refused to name the shooter.

"I will not give him the credit he probably sought prior to this horrific and cowardly act," he said.

Watch: 'I will not name the shooter'

Condolences pour in for #UCCShooting victims

President Obama ordered all flags at public institutions to fly at half-staff until Tuesday night.

The president, who has spoken for 15 mass shootings in the U.S. during his presidency, called for "common sense" legislation aimed at preventing gun violence.

The president of Umpqua Community College called Thursday the "worst day in the history of the college." 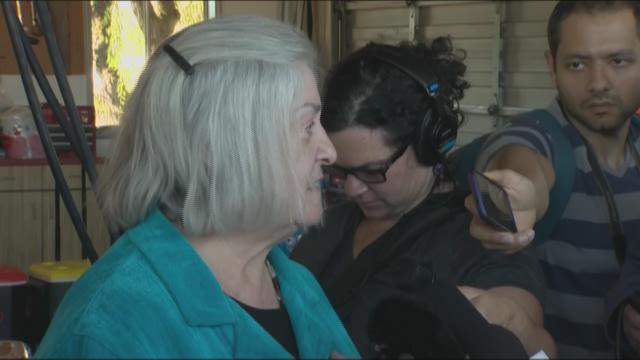 Police received a call of an active shooter in a classroom at the college at 10:38 a.m. Thursday, according to the Douglas County Sheriff's Office.

The shooter engaged with officers and was killed. Officers later learned he was the only shooter and Roseburg Police Sgt. Aaron Dunbar told USA TODAY that the incident was contained to one classroom on the sprawling campus.

Authorities in Roseburg quickly spread the word and called on residents and students not to go to the campus.

Harper-Mercer used a handgun when he opened fire, the Associated Press reports. He stashed a rifle in another room but did not use it. Fourteen total guns were seized from Harper-Mercer, most of them at his residence a mile away, according to the Douglas County Sheriff's Office.

"We are shocked and deeply saddened by the horrific events that unfolded on Thursday, October 1. Our thoughts, our hearts and our prayers go out to all of the families of those who died and were injured," Harper-Mercer's family said in a statement on Saturday."

One student, 18-year-old Kortney Moore, told News Review-Today that she was in her writing class in Snyder Hall when a single shot came through a window.

Photos from scene of shooting near Roseburg

Moore said she saw her teacher get shot in the head, apparently after the gunman came into the classroom. At that point, Moore told the newspaper, the shooter ordered everyone to get on the ground. The shooter then asked people to stand up and state their religion and then started firing, Moore said.

Another student told KGW's Wayne Havrelly that her teacher knocked on the classroom door where the shooting took place.

"She said, 'Kelly, is everyone OK in there?' And then as soon as she said that, it was just rapid fire over and over and over again," said Hannah Miles. "You could hear them moving and crying and she gets this look on her face - horrifying - she says we need to get out."

Students who were in class at the time across the school campus went into lockdown while SWAT teams searched for the shooter. Students hid behind desks and teachers locked classroom doors until police evacuated them.

"When we ran out of the building everybody went every which way," Miles said. "It was so chaotic."

Six LifeFlight helicopters from as far away as Boise were dispatched to help the victims.

The federal Bureau of Alcohol, Tobacco, Firearms and Explosives tweeted sent special agents and a K-9 team to the scene. Portland Fire and Rescue also sent crews to Roseburg.

Students who were not hurt were bused to the Douglas County Fairgrounds, where they reunited with friends and family. The Red Cross set up a Safe and Well site to help reunite people.

Counselors were also on hand to help students at the fairgrounds.

The campus will open October 5 and classes will resume October 12. Candlelight vigils were held in Roseburg and Portland Thursday night.

How you can help: A community responds

The Douglas County Sheriff's Office asked anyone with information about the shooting to call the FBI.

There was only one security officer on duty and that person was unarmed, former president of Umpqua Community College Joel Olson told the Associated Press.

He said one of the biggest debates on campus was whether the school should have armed security officers. He said the college had three training exercises with local law agencies in the past two years, "but you can never be prepared for something like this."

This was the first shooting in UCC history. There was a shooting at Roseburg High School in 2006. The victim, who was shot four times, survived.

Umpqua Community College is located six miles north of Roseburg and three hours south of Portland. The school has about 3,300 full-time and 16,000 part-time students.

Tracking the day: How events unfolded in Roseburg

TIMELINE: Other school shootings since Columbine