Steve Salisbury picked up the guitar two years ago. Now, he’s a first-time songwriter who wants the community to join together in song, thanking health care workers. 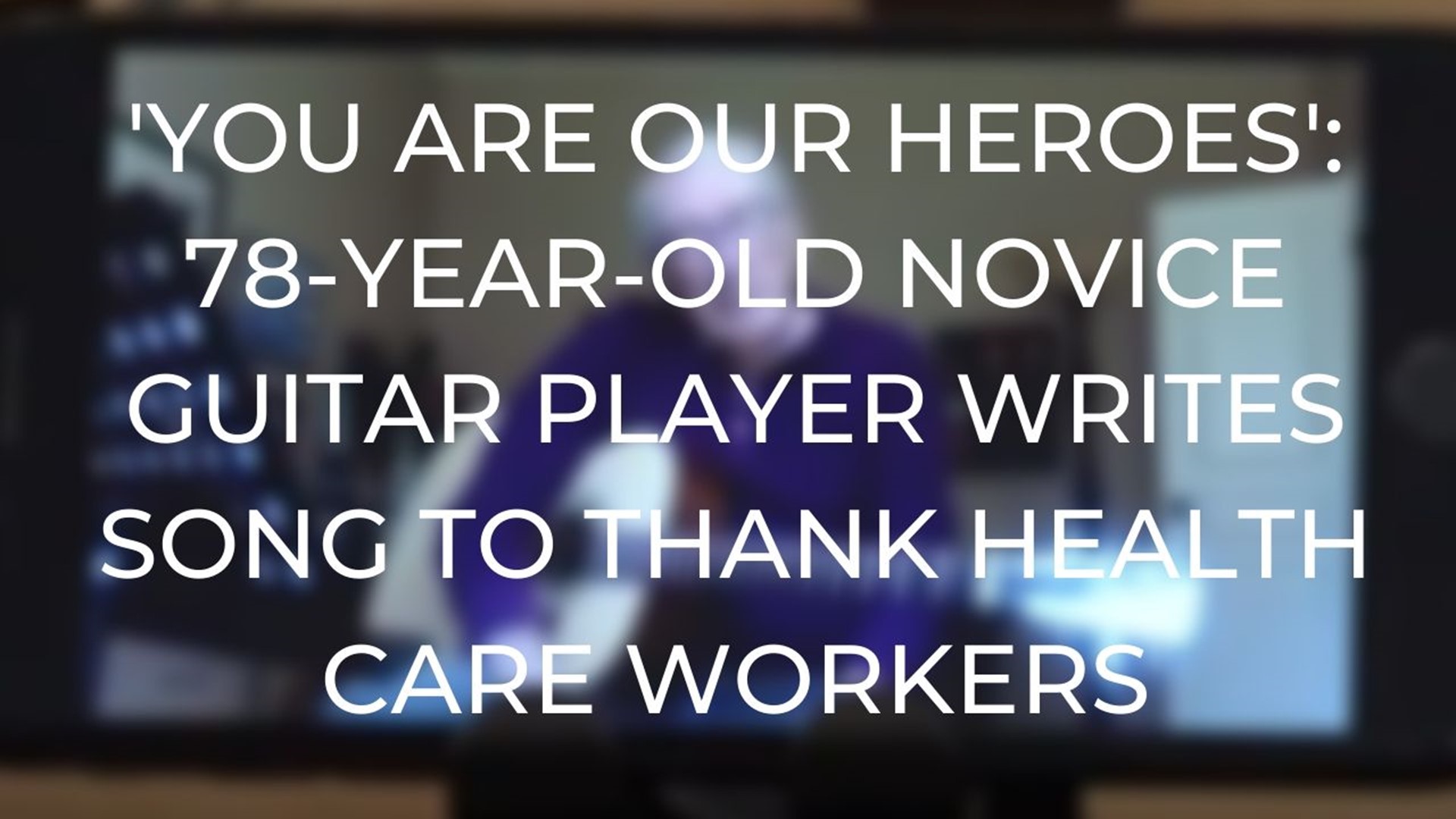 ALBANY, Ore. — From free meals to our nightly howls of gratitude out or windows, so many of us are finding ways to say thank you to the people saving lives in this pandemic.

That includes 78-year-old Steve Salisbury. He’s retired and living in Albany, Oregon, where he is spending his time at home encouraging all of us to talk about our health care heroes in song.

Music really is a superpower, one that we all share. No matter your skill level, music can bring us together in ways nothing else can.

Take it from Salisbury. There’s no need to be pitch-perfect when you have a song in your heart.

“I’m not there to wow them with my musicality or my vocal capabilities, because I don’t have either one,” he said.

Two years ago, when he was 76, Salisbury picked up the guitar. Soon after, he started playing and singing for seniors at area nursing homes.

“I ended up playing for a memory care unit and that truly hooked me,” Salisbury said.

He performs songs from the 1940s through the 70s. They’re hits that he’s seen spark memories long forgotten.

He told KGW about a man who sat quiet without a smile or applause during one of his shows. That is until Salisbury was packing up and getting ready to leave.

“He walked up and got right up next to me and said, ‘Sir, I can’t thank you enough. The songs you played brought back memories I hadn’t had in years,’” Salisbury said. “That was the pay day right there.”

You might say Salisbury is more of a performer than a practiced musician. Or in his words: “I’m an old man trying to be an entertainer.”

When the COVID-19 pandemic hit, Salisbury was worried he wouldn’t be able to entertain his usual crowd. So, he turned to technology to bring his memory-evoking songs to his more isolated audience.

“That sparked up the first video,” he said. “For eight songs it took me a week to make a video."

Music, no matter who’s playing, can strike a special chord, even from a computer screen, according to Salisbury.

“They’ll [memory care doctors] be the first to tell you that the best way to communicate with a memory care patient is music,” he said.

Now, he wants to share that spirit with our health care heroes.

“I don’t know that many people are really giving the praise to these people that are risking their lives to save ours,” Salisbury said.

Salisbury went to work as a hospital executive after serving in the Marine Corps for nine years, which included two combat tours in Vietnam. So, health care workers hold a very special place in his heart.

“As far as I’m concerned, they are our heroes. Ergo the song,” he said.

Salisbury has never written a song before but figured now was the perfect time to try.

“I wrote the words just like I would be talking to a group of nurses, doctors and EMTs,” he said.

So, to the tune of “You Are My Sunshine,” Salisbury is thanking the doctors, nurses, and first responders on the front-line of the coronavirus pandemic.

It’s a simple tune and Salisbury wants it that way so that just about anyone can join in, including news reporters.

Salisbury and KGW’s Brittany Falkers sat down for a remote jam session to play the song together.

He’s sharing the lyrics and chords with everyone in hopes that the community will join together in song.

“I don’t need any credit for it. I don’t need my name on it,” he said. “I just want everybody to use it for the purpose for which it is intended and that’s to thank the people that are saving our lives every day.”

If you’re a professional, an at-home performer, or you’re completely tone-deaf -- it doesn’t matter. Salisbury just wants you to sing, to connect, and say thank you.

“It’s just another way of saying thank you and we’re behind you,” Salisbury said.

Below are the the lyrics and guitar chords to “You Are Our Heroes.” Sing along and post a video to social media using #KGWtogether.