'This is a moment to rise': Santiam Canyon Wildfire Relief Fund surpasses $2M in donations

The Santiam Hospital Service Integration Team says it has helped more than 700 families thanks to the donations. 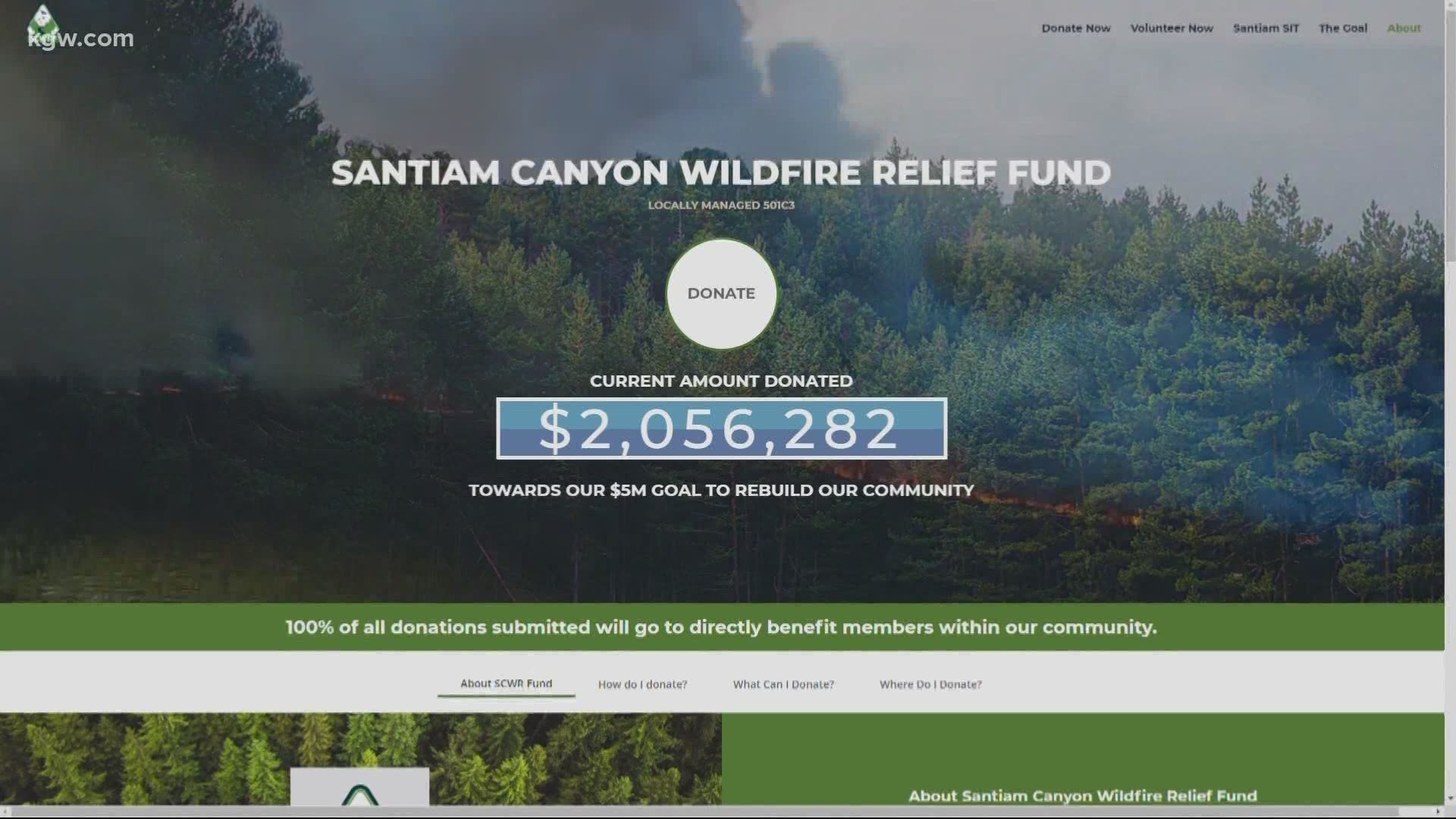 STAYTON, Ore. — It's been about a month and a half since wildfire tore through communities off Highway 22 in the Santiam Canyon.

People living there started the Santiam Canyon Wildfire Relief Fund to help their neighbors in the canyon. Donations have poured in. It’s now at more than $2 million.

“It's been like a dream that you can't wake up from. That's kind of how it's been like, like a nightmare,” said Marta. She’s a single mom to five kids and her family has been in survival mode since early September when the fire hit.

Marta remembers the day they left.

“Monday on September 7th, I was just cooking pancakes. It was a beautiful day. We were happy,” she said.

But then, evacuations started. Marta told each of her kids to pack a bag.

“At that point, what do you take?" Marta asked. "You look around at everything you've built up in your life, and all of it seems important to take. But we only had one van.”

Their family van, Marta said, was so stuffed there was no room for their family dog, Mooshu, or their cat, Flower.

“That's been really hard because I was really attached to our dog,” said one of Marta’s daughters.

More than just a home

Marta said it was on Sept. 10, a few days after the family had left, that they found out they’d lost everything, including their pets. But the home that had burned, was more than just a house.

“We're domestic violence survivors,” said Marta. That’s part of the reason she was not comfortable publicly giving out her last name, or the names of her children.

“We left our entire life of 16 years behind. That's why it was so important what we did build up, where we were at. That's why it meant so much to us," she said.

Marta said after she and her kids packed into the van and left her ex-husband two and a half years ago, they’d finally found the perfect place to live. She had a job and had worked hard to get off of welfare.

“I want to give them [the kids] a good home that we own and that nobody can take away from us,” said Marta.

She said they were on their way toward that goal, at the time renting their home in a beautiful location. Then the fires broke out.

Helping them along the way with their needs are donations from the Santiam Canyon Wildfire Relief Fund.

“Marta's story is the reason why we’re here,” said Deana Freres, one of the fund organizers.

Freres said she wasn’t necessarily surprised or shocked to see so many people in the canyon donating to help their neighbors.

“I think how quickly it’s happened is what really takes our breath away,” she said. “The level of support is jaw-dropping still, on a daily basis.”

The money that’s been donated is distributed through Santiam Hospital's "Service Integration Team," known at SIT. Prior to the fire, SIT was already responding to the needs in the community working with representatives from many different agencies and community businesses. The team was in a position to easily transition to helping families who needed help due to the fire. SIT is the go-between, vetting and connecting people in need with money from the Santiam Canyon Wildfire Relief Fund.

“They've just been my shining star throughout this whole thing, just the beacon that has got us through,” said Marta.

"We have a housing committee that has met with Marta and is going to be working on finding a new home for her and the kids,” Melissa Baurer said.

Baurer is with SIT and says money from the fund has helped 705 families, which includes 1,500 children. Of those families, she said more than 100 of them said they had no place to go. She said SIT is also working to find those families places to stay. In addition to helping people and families navigate how to get help, the team also provides basic necessities like clothes, food, and have also given out gas cards.

'This is a moment to rise'

Marta is grateful for all the support. In fact, she said SIT was able to provide her family a donated van because the old one they used to leave the Santiam Canyon had since broken down. Now, each new day, she hangs on to the gratitude she feels.

“Don't just always focus on the bad, that's how we've gotten through it," said Marta. "Knowing that this is a moment to rise and this is gonna get us to the next place in our life that's gonna be even better than where we were before."

She hopes people take a moment to realize how fortunate they are.

“When you have a home, when you have a good job, and a good running car, those are such blessings that should not be taken for granted," Marta said. "Love your life, love yourself, love your family, and if you don’t, do something about it.”

Right now, Marta said she and her kids are staying with other family but is hopeful SIT will help her family find a different place to stay soon.

“This situation has shown me a strength I really never thought that I had," she said.

The goal of the Santiam Canyon Wildfire Relief Fund is to get $5 million in donations to help rebuild the communities in the canyon.