William Lapschies, among the first Oregonians known to have the disease, has been declared free of the virus, said daughter Carolee Brown. 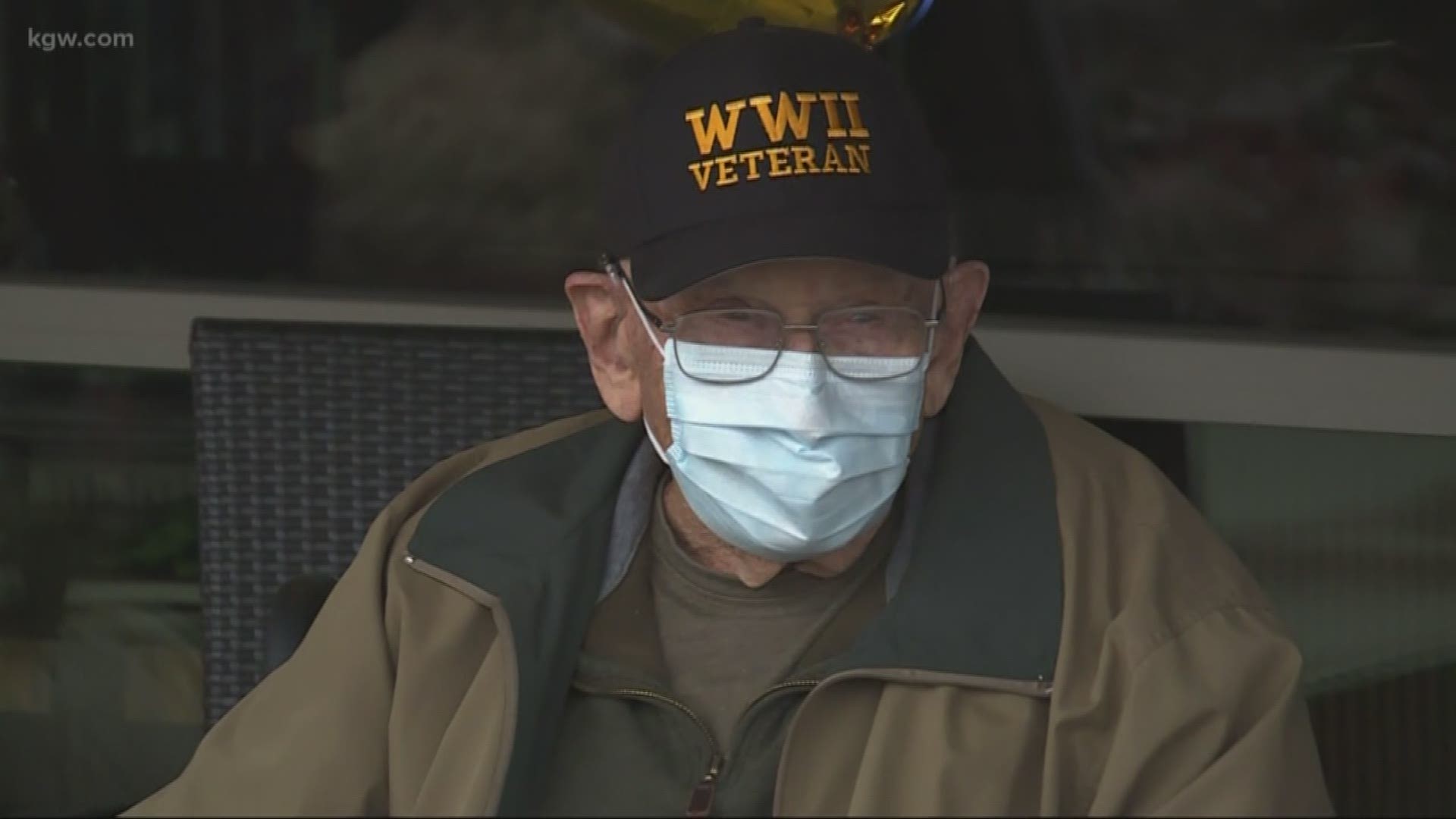 LEBANON, Ore. — An Oregon veteran who celebrated his 104th birthday Wednesday could be one of the oldest people in the world to survive the new coronavirus.

William Lapschies, among the first Oregonians known to have the disease, has been declared free of the virus, said daughter Carolee Brown.

“He is fully recovered. He is very perky,” Brown said. “And he is very excited.”

Not only is Lapschies thriving, he basked in the attention as Brown and other immediate family members clustered in the morning outside his window at the Edward C. Allworth Veterans’ Home in Lebanon.

They brought balloons and a double-layered cake. “Because he loves chocolate,” Brown said.

The gathering didn’t rival Lapschies’ 100th birthday party that drew 250 people, but this one was every bit as special and all the sweeter for her father’s good health.

“I finally made it,” Lapschies said as Brown, her husband, daughter and son-in-law finished singing “Happy Birthday.”

A light blue surgical mask hid half his face but his eyes crinkled at the corners to show he was smiling as he talked to his family in a courtyard outside the nursing home’s common area.

A caregiver had brought Lapschies out in a wheelchair to sit a proper distance away from the small semi-circle of people, but he still held forth, wearing a World War II veteran hat and dark blue jeans.

Lapschies (pronounced Lap’-shees) had a hard time hearing the family, but he was sharp and in a good mood. He spoke slowly. He laughed at just about everything.

The wind picked up on the cold and drizzly day and stray balloons detached, flying sideways before rising into the sky above the veterans home. One balloon rolled past Lapschies’ feet and he tried to kick it. Another balloon flew into his hands before it sailed toward his daughter and granddaughter.

“That one’s gonna hit her in the head!” he said.

Staff members brought out two blankets to wrap him up, putting his “Quilt of Honor” with star patterns in the colors of the American flag on top.

Asked how he kicked the virus, Lapschies paused, serious for half a beat.

“Oh, it just went away," he said, laughing again.

Soon it was time to return to his room.

“Bye-bye,” he said, his voice trailing off as a worker rolled him back. “Wooo!”

Amid the torrent of harsh headlines that come with every new day in the age of coronavirus, Lapschies’ recovery offers a glimmer of hope.

COVID-19, the disease caused by the virus, is particularly dangerous for elderly people and for people with underlying medical conditions like diabetes and heart disease.

Two of 15 residents at the veterans home who tested positive have died, as have dozens of people associated with an assisted living community near Seattle. Nearly 30 senior care homes in Oregon have reported at least one coronavirus case.

Somehow, Lapschies made it. While U.S. studies show that up to about 27% of people over 85 with the coronavirus don’t make it, news reports from around the globe point to a handful of hardy survivors like Lapschies.

A 95-year-old Yamhill County man, also a veteran, has survived. A 101-year-old man in Spain has survived, as have two 103-year-old women, one from China and one from Iran.

There was a moment when it wasn’t clear if the Salem-born World War II veteran would ride out the infection.

A few days after his March 10 diagnosis, a doctor at the nursing home, where Lapschies has lived for eight months, called Brown to say her father wasn’t doing well.

Lapschies’ temperature had spiked and his breathing was labored. The doctor and Brown talked about end-of-life decisions.

As she’s been doing twice a week since Lapschies got sick, Brown said she walked up to her father’s first-floor window. She expected to see him lying in bed. Instead, he was sitting in a wheelchair with his back toward her.

She banged on the window three or four times. Lapschies, who has hearing loss, turned around, then used his feet to scoot to the window.

Brown called his cellphone and a caregiver wearing a blue protective gown, mask, face shield and gloves switched on the speakerphone so Lapschies could hear.

And, she said, he’s been getting better ever since.

Brown attributes her father’s survival to his outlook on life: “He has such an upbeat attitude. He’s never down.”

Credit: The Oregonian/OregonLive
William Lapschies, 104, was born at Salem Hospital in 1916 and worked as a used car salesman after serving in the Aleutian Islands during World War II.

A used car salesman by trade, Lapschies loves company. His isolation during the outbreak is about the biggest hardship in the three weeks since the nursing home went on lockdown.

Lapschies used to walk the halls and chat with people, Brown said, and now isn’t allowed to leave his room. Family members used to visit him regularly but now can meet him only at his window. They used to take him out on short trips, Brown said – one of the more recent ones was breakfast at the local Shari’s – and now they can’t.

But they hope to again at some point.

Lapschies lived through another pandemic – he was born at Salem Hospital in 1916 and was 2 when influenza infected a third of the world’s population and killed at least 50 million people, including 675,000 in the United States.

He grew up in Salem, married Alamadean “Deanie” Buetell in 1939 and was drafted into the Army in 1943, leaving behind Brown, who was born that same year, and an older daughter, Billie Jean, who was 2. He was stationed on a small island in the Aleutian Islands, where Brown said he helped dispatch trucks and heavy machinery.

After the war, he moved to Keizer with his family and settled down selling used cars at a place called Orville’s Car Lot.

Credit: The Oregonian/OregonLive
William Lapschies turned 104 on April 1 and planned to celebrate at the state veterans nursing home in Lebanon while his family stands outside the window and talks with him on the phone.

Lapschies is the kind of dad who bought Brown a little brown horse for $60 when she was an obsessed 10-year-old and set her on her lifelong love of horses. He bought her a rundown 1939 Mercury coupe when she was 16.

The two “worked and worked on that thing” until it was drivable, Brown said, and she kept the car through high school.

The entire family’s love of the outdoors, Brown said, traces back to Lapschies, who took his two daughters and wife camping – often with a slew of neighborhood kids tagging along – at a time when spending a few days in the woods wasn’t yet all the rage. She remembers the Army-issue tents they slept in and the smelly Army sleeping bags.

Brown is looking forward to the day when she can finally get into the veterans home to see her father without glass between them.

The first thing she’ll do is give him a big hug, she said. Next order of business: giving him a haircut.

“His hair is getting pretty long,” she said, laughing.

The family kept the list of those attending Wednesday’s party small so everyone could easily stay at least 6 feet away from each other.

But, Brown said, her father’s 105th birthday party will be different.

“We’re really going to have a big one,” she said.