It’s a standard Stone Mountain cul-de-sac. Behind one house is a refugee’s grand garden

She fled the violence of Myanmar to Thailand, then Malaysia … and finally, in 2010, America. 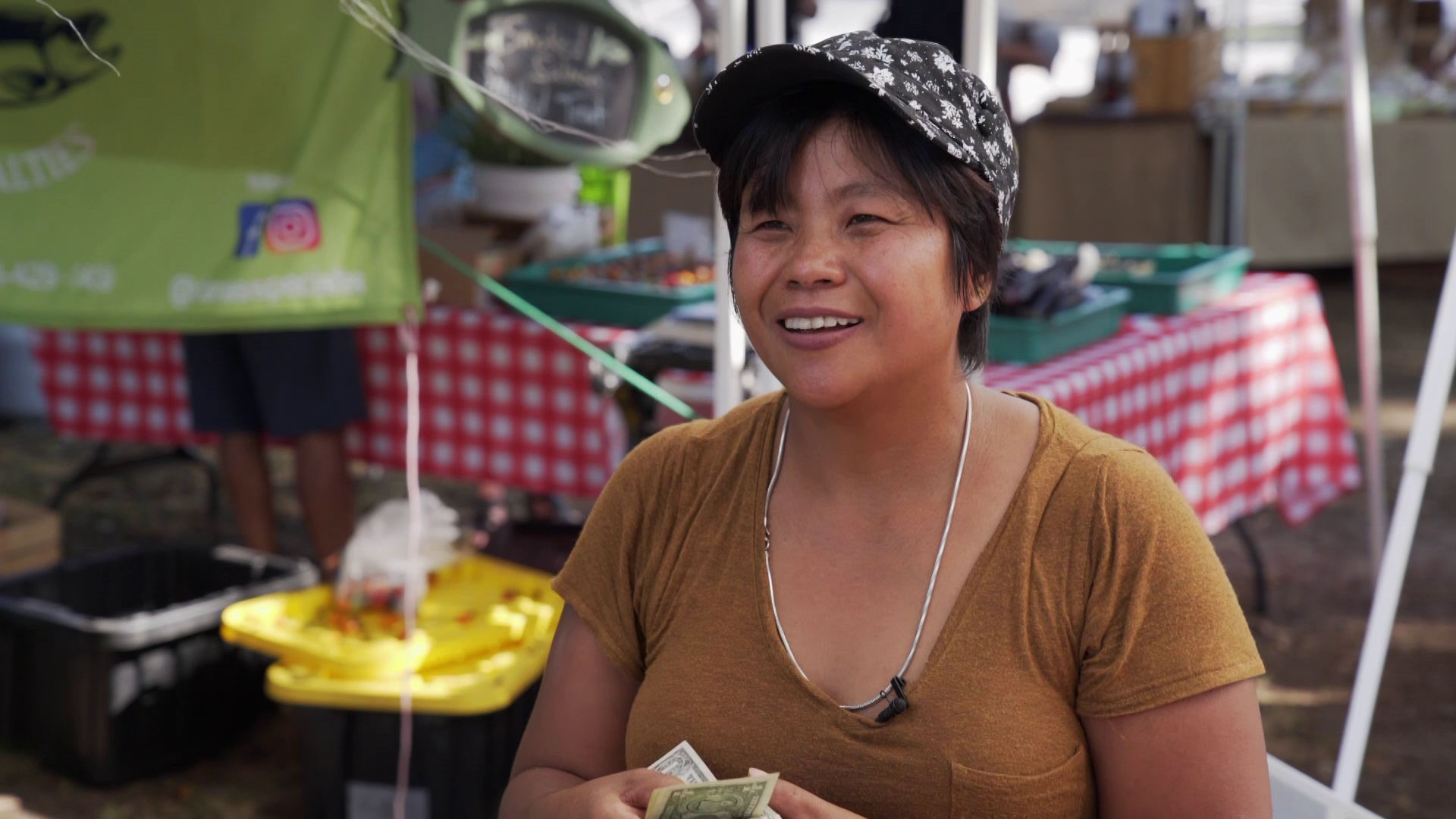 STONE MOUNTAIN, Ga. — At five feet tall, Dim No Zam Suan barely appears above the stalks, plants and rows of green that spread across her garden.

But her sounds are unmistakable: the rustle of leaves as she snakes her arms through stalks; the sharp snap as she pulls African eggplants from their stems; and the bouncy echo as the eggplants drop from her hands into a white bucket one foot high.

Then there's her voice: a falsetto that sings a pleasant melody with an effortlessness that belies the sun-soaked hours she spends outside.

“Christian song," the 43-year-old says in broken English of the lyrics, which she sings in her native language of Zomi. "You know Christian song?”

These are the songs that, like the plants she grows, remind her of home. Home is Myanmar.

Dim No spent her childhood there. But home is now metro Atlanta.

Her garden is tucked behind an ordinary ranch house in a Stone Mountain cul-de-sac. It is the symbol of a refugee's triumph - and her efforts to spread it to others.

“In Zomi language, we say, ‘Food is life and happiness,'" Dim No says through a translator. “When I look at my garden, it makes me forget everything and makes me happy.”

Dim No's father passed away when her mother was pregnant with her youngest brother. Her mother became the family's engine and foundation.

“My mother’s farm was far," Dim No says, "like 3-4 miles away, but she walked to and from her farm every day. She carried tree branches on her back to start a fire so she could cook. Even though the farm was huge and she was tired, she pretended like she was not tired at all."

Her mom is her hero, Dim No says: “Because of my mom and God, we got a chance to live a better life.”

Dim No’s mother remains in Myanmar. Not Dim No. She fled the violence of her country to Thailand, then Malaysia. Finally, in 2010, she came to America - and Atlanta.

She arrived pregnant, sick, and powered by faith.

Three years later, she connected with Global Growers, a nonprofit that provides farmers and community growers with a network of training and support. She began growing in their Decatur Kitchen Garden as well as her backyard in Stone Mountain. She recently received her egg candler's certification, which means she can - and does - raise chickens in her yard, right next to the garden.

Today Dim No is a mother, who spends her non-garden time corralling three children. Her husband works. She works.

“When I’m very tired," Dim No says, "my head hurts and I feel dizzy and feel like throwing up. It won’t go away in a day. I have to wait like five days or so and take medicine. But when I’m tired, I sing gospel songs. They inspire me and say God is with us all the way.”

Every Thursday, Dim No collects her harvest and spreads the rewards. For four hours in the evening, she minds a stand at the Tucker Farmers Market. She puts out labels so passersby can identify the eclectic items. Many are familiar: eggs, bell peppers, mangoes. Many are more common to where she grew up: long beans, mustard greens, and giant bundles of pumpkin leaves.

In those hours in Tucker, Dim No communicates through broken English and the universal language of food and smiles. But most never see where she goes before.

For one hour in the afternoon, at an apartment complex in Clarkston, Dim No sets up a stand for the refugees and immigrants who live there. The residents crowd the tables, jostle for position, and leave Dim No with a largely empty set of crates by the time the market ends. She sells the staples of their homelands: India, Nepal, Bhutan, and of course Myanmar.

In these moments, five feet tall feels mountain high. In these moments, Dim No follows the legacy and lessons of her mother to fulfill a path of - as the Zomi saying goes - life and happiness.

“I want other refugees to know that if you like something, you can find a way," she says. "I want them to pursue their dream.”

Photos: Refugee who escaped violence to Atlanta spreads reward of her garden

To learn more about Global Growers, check out their web site. To check out Dim No's produce, visit the Tucker Farmers Market, Thursdays from 4-8 p.m.

Marietta might be a temporary shelter for 50 unaccompanied migrant children

US proposes tougher rules on work permits for asylum-seekers

Syrian refugee turns to food to rebuild his life in US