‘Music is a powerful tool’: Teens performance in front of wildfire devastation raises money for relief

Lincoln High School musicians use their talents to raise money for a family, a church and community displaced by historic Oregon wildfires. 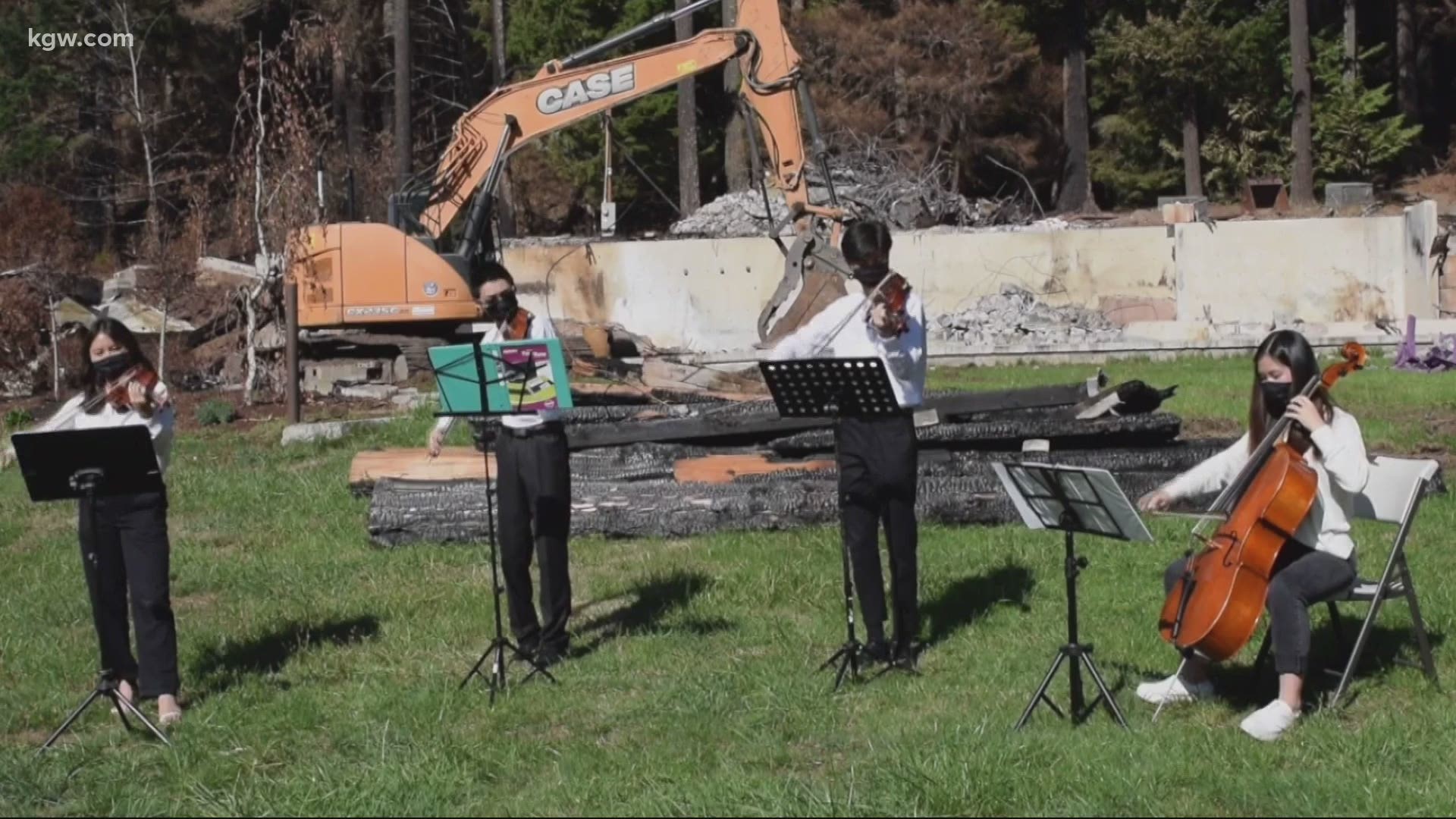 ESTACADA, Ore. — Serene classical music against the backdrop of devastation. The juxtaposition is just right for instilling a sense of hope and resiliency.

“I think music is a powerful tool to really instill hope in various communities, especially in times that are difficult, like right now,” high school musician Elliot Shin said.

Shin is a Lincoln High School teen and founder of Olivenbaum, a musical outreach program that performs with the ambition of uniting communities and providing peace. Olivenbaum, is German for olive branch, a sign of peace.

October 4, four Olivenbaum teenage musicians used their talents in a performance to raise money for communities left in rubble after Oregon’s historic wildfires. A string quartet played in front of a burned down home and church in Estacada.

Ashley Yoon is a senior at Lincoln High School. She’s been playing her violin with Olivenbaum since she was a freshman. The performance in front of livelihoods lost to the fires was powerful for Yoon and her fellow young musicians.

“It was kind of awakening that this is the reality for so many Oregonians and that so many people, not just in the Dodge community, were affected by these fires,” Yoon said.

Soothing sounds against the backdrop of devastation.

These Lincoln High School musicians are using their talents to raise money for wildfire relief.

Learn about the mission behind the music at 4 p.m. on @KGWNews https://t.co/bwe2r6GN7c

One of the buildings in ashes where the group performed was once Caleb Brontov’s family home.

“It was pretty devastating to see our work and our craftsmanship burn down like that,” Brontov said. “It was a lot of work and love went into building that house.”

Not just a house, but a home he built with his dad, brothers and family friends. It was a place where church members would gather for lunch after Sunday services, where the family would host youth camps and the place Brontov and his wife said their vows just a couple months before the fires.

“You see those pictures and you’re just like, those memories, so grateful that we had that and just, yeah pretty sad to see it go,” he said.

The walls they built, the memories they made, had burned to the ground. Not far down the road the church he grew up in was also lost.

Dodge Community Church became the second location for a concert of strings.

Shin heard about the Brontov family and their beloved church through a friend on social media. It was the kind of need Olivenbuam seeks out so they can use the power of music to heal, unite and raising money.

“We aim to use our skills as musicians to really help out the community,” Shin said. “We want to do this to help the community. So, I mean, it was just really great to do.”

“I just hope it reached their heart and makes them feel something different,” Yoon said.

The goal with their latest performances: raise money to help rebuild. One-third of the donations will go to the Red Cross, a third to the church and the rest to the Brontov family.

With so much devastation around us these young people are finding the beauty of resilience and support.

“The support is just incredible and what really keeps driving us going,” Brontov said.

Here's where you can donate.