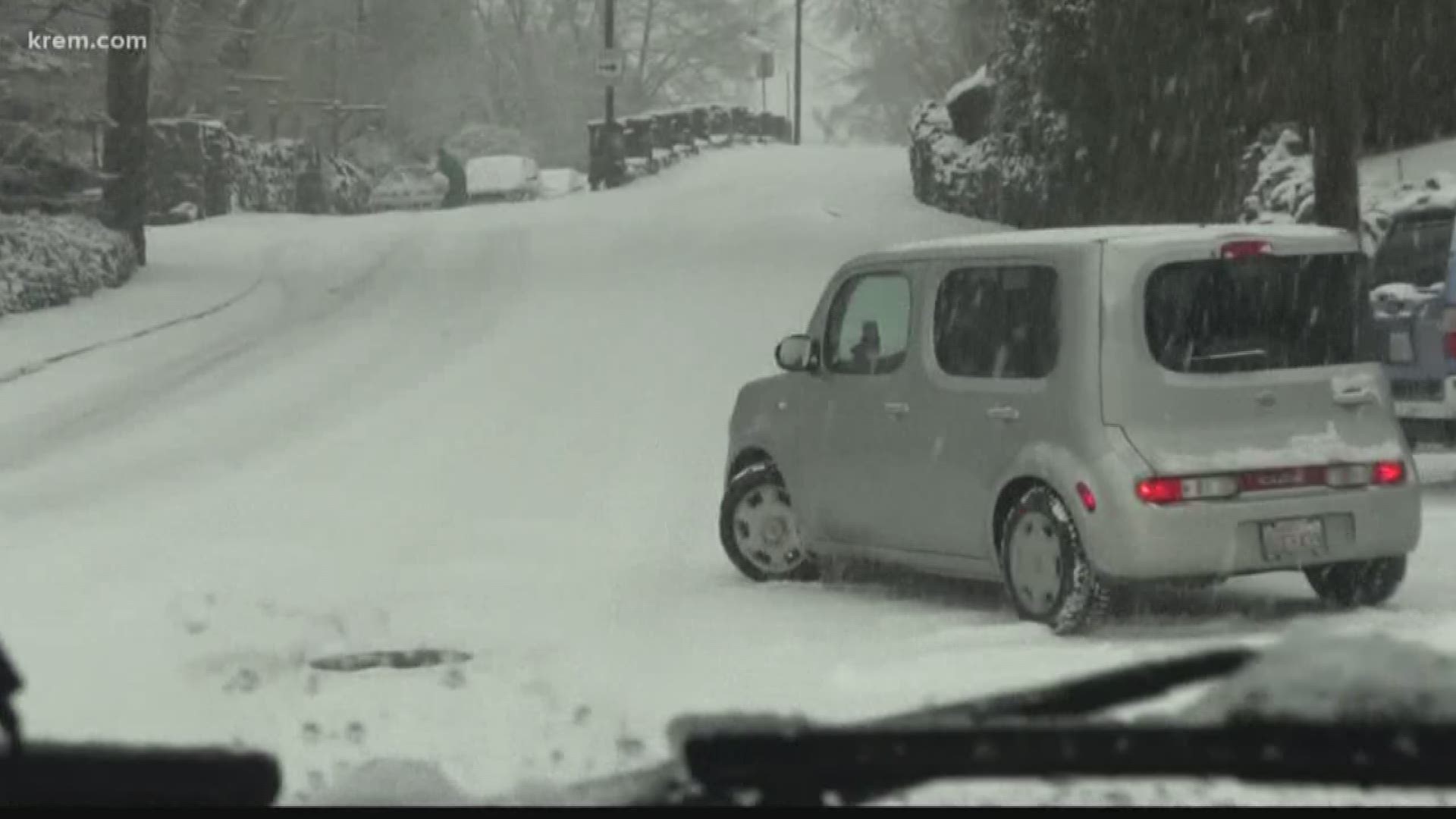 SPOKANE, Wash. — The City of Spokane has completed a full-city plow launched on Friday, spokesperson Marlene Feist said on Monday.

All residential streets have been plowed but crews are redoing the arterials after new snow fell on Monday, Feist said. This may be why people see "working" or "next up" lines on the city's live-updating map.

The City of Spokane has a snow removal map on its website that shows areas where plows have been and where the plan to go next.

During a larger snowfall of four inches or more, crews move to 24/7 operations for a full-city plow, which is usually completed in about three days.

The city launched a full-city plow beginning at 5:30 p.m. on Friday amid heavy snowfall.

According to KREM Morning Weather Anchor Evan Noorani, the National Weather Service in Spokane said Friday's 7 inches of snow broke the previous record for snowfall on Jan. 10. The previous record was 5.8 inches set in 1979.

Trace amounts of snow fell in Spokane on Saturday, with more than two inches falling on Sunday, Noorani said.

City spokesperson Marlene Feist said the full-city plow was completed at about 10 p.m. on Sunday.

The green lines on the city’s online snow removal map indicate a “completed” status, while blue lines mean crews are working the area and red lines mean the area is “up next.”

Many lines on the city's website are blue and red on Monday morning, with a great deal of the area already complete.

The map also indicates whether routes are maintained by residents or city crews.

The order of the residential routes are posted on the city’s website. There are parking restrictions downtown from midnight to 6 a.m. so crews can clear streets and parking bays.

Cars should be parked on the odd side of the street (the side with odd-numbered houses) in residential areas to help plows.

Spokane residents have experienced heavy snowfall since Friday. Dozens of area schools are opening late on Monday, with some in North Idaho that are closed.

Spokane could pick up two inches of snow on Monday morning, while areas such as Coeur d'Alene could see between three and four inches of snowfall.

Snow showers could continue on Tuesday, but amounts should be light and the snow will likely be powdery,

More significant snowfall is not expected until Thursday and then again on Saturday.

The coldest temperatures of winter so far are expected to arrive in the Inland Northwest this week. NWS says the cold will be accompanied by blustery winds and the potential for blowing snow.

The windiest conditions are expected Monday, followed by the coldest temperatures on Tuesday and Wednesday.

The National Weather Service predicts that Spokane's high temperature will sit at 12 degrees on Wednesday, Jan. 15. Low temperatures could dip below zero in both eastern Washington and North Idaho.