A KGW investigation recently uncovered a pyramid-like scheme of locksmiths in the Portland area. As the reporter discovered, an update on the story shows that the issue may not be going away anytime soon. 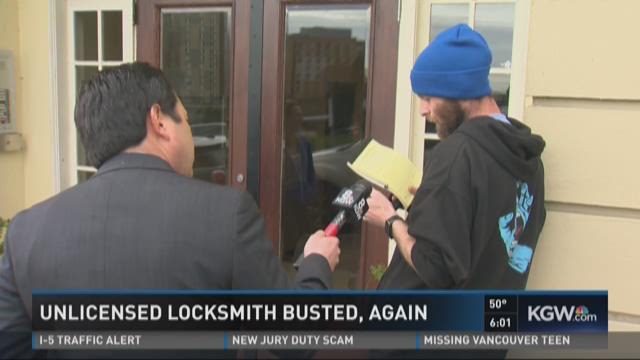 A KGW investigation found many locksmiths listed online are not locksmiths at all. Those phone numbers are often directed to call centers which send out poorly trained subcontractors.

When KGW called an online locksmith, a convicted felon showed up in an unmarked truck. State regulators said Michael Notas was not a certified locksmith in Oregon and he did not have a Construction Contractors Board license.

“We now have an active investigation into the individual in your story,” Cheryl Martinis of the Oregon CCB wrote in an email to KGW following the recent reporting.

I figured that was the last we’d hear of this so-called locksmith.

One week later, I spotted Michael Notas driving in downtown Portland. Instead of an unmarked truck, Notas was now driving a company van with “Locksmith Monkey” emblazoned on the side.

Notas eventually parked in front of an apartment complex in Southwest Portland. He was called to help a woman locked out of her apartment. Even though his truck read “Locksmith Monkey”, Notas carried an invoice notepad for a different company- “24/7 Locksmith”.

“What are you doing?” asked Notas as I approached with a microphone, along with photojournalist carrying a camera. “You just tracked me down?” he asked.

Notas declined to explain why he was operating without a valid locksmith license and left.

“Wow, I mean. Kind of a great blessing in disguise. Glad you guys showed up,” said customer Brooke Richards.

Richards said she used Google to find a locksmith in Portland. She trusted that the company would send out a licensed locksmith.

“He would have had access to the building,” said Richards. “That is scary, really scary.”

The Locksmith Monkey website reads “We’re Proud to be Locally Owned and Family Operated.” The website lists various addresses under “Our Locations.”

I decided to visit the address listed at 7660 SW Barbur Boulevard. It was not a locksmith. It was a dog care facility.

When reached by phone, a man claiming to be the owner of Locksmith Monkey admitted the addresses listed on the website were not office locations. He said the unlicensed locksmith, Michael Notas, was a “trainee” for the company. The man defended his company. He declined an on-camera or phone interview.

Several hours after my conversation with the owner, the address listed on the Locksmith Monkey website changed from “7660 SW Barbur Blvd” to “7600 SW Barbur Blvd”. Several days later, the Barbur Boulevard location had been completely removed from the company website.

In this screenshot of the Locksmith Monkey website, the address of the Barbur Boulevard location has changed slightly.

A spokesperson for the Oregon Construction Contractors Board - the agency responsible for locksmith licensing- declined multiple requests for an on-camera interview with KGW regarding enforcement efforts.

“The CCB investigates every solid tip we receive of unlicensed activity,” wrote spokesperson Cheryl Martinis in an email. “Running down people who are operating illegally – after the fact - is challenging.”

The spokesperson said it is important for consumers to verify that a contractor is licensed by checking the CCB website. There is no public database to check locksmith certification in Oregon. Consumers need to call the CCB at 503-378-4621 to inquire.

After we confronted Michael Notas for a second time, state regulators say he applied for a locksmith license. The CCB is evaluating his application.

To protect yourself from bogus locksmiths: